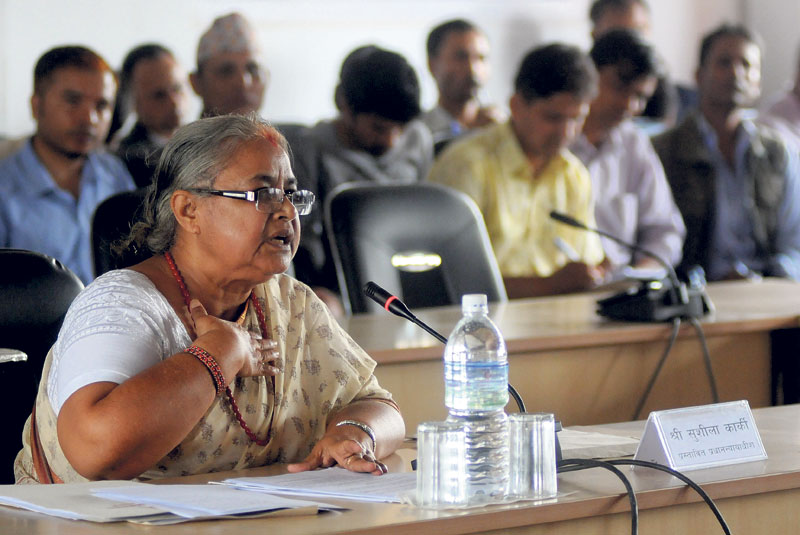 KATHMANDU, July 11: The Parliamentary Hearings Special Committee (PHSC) has endorsed the recommendation of the Constitutional Council for appointing Justice Sushila Karki as chief justice of the Supreme Court.

The committee meeting  on Sunday unanimously endorsed the recommendation after hearing Karki's responses to allegations and complaints brought against her.
Following the parliamentary endorsement, Karki will formally become the first female to head the judiciary in Nepal and the 26th chief justice of the country. The Constitutional Council had recommended Karki for chief justice on April 10 and she has been heading the judiciary as acting chief justice since April 14. She will head the judiciary until she retires on June 7, 2017, when she reaches the age limit of 65.

Karki promises to reduce case backlog
Speaking at the parliamentary hearings committee, Justice Karki said that her priority as chief justice will be to bring down the number of cases pending at the Supreme Court.
"If justices are appointed in time to all the vacant positions, the Supreme Court can bring down the number of unsettled cases to 8,000 in six months," she said.
Currently, more than 25,000 cases are pending at the apex court.
She also said that she will give priority to maintaining the clean image of the judiciary and act forthrightly on all reports concerning it.

When lawmakers on the House panel questioned her about corruption within the judiciary, Karki said she would maintain a policy of zero tolerance towards corruption and irregularities. She also said the judiciary has been mulling the establishment of a monitoring mechanism within itself.

Karki defends Judicial Council recommendations
During the hearings, Karki defended the latest recommendations of the Judicial Council for the appointment of seven career judges and four advocates as justices of the Supreme Court. Some lawmakers had asked her about  politicization of the judiciary, citing the recommendation of advocate Sapana Pradhan Malla, a former lawmaker from the CPN-UML, for appointment as a justice.
"I was a cadre of the Nepal Students Union, the sister wing of the Nepali Congress, in my student days but nobody can say that I have favored that party in my verdicts," said Karki, adding, "Sapana is a capable advocate."
"I am the one who recommended Sapana's name at the Judicial Council meeting," she said to the lawmakers.

Karki answers complaints
There were six complaints against Karki at the PHSC and she responded to them all during the hearings.
On the basis of one particular complaint, lawmakers questioned her competence, citing the case of Rajiv Gurung versus Nita Gurung, in which her bench rejected a DNA report. In reply, Karki urged lawmakers to see the full text of the verdict and said the bench had not rejected DNA tests as such but only the DNA report in that one case as the sample collection process was not up to standard.
When some lawmakers asked her about her personal property, she challenged them to probe the matter.

Karki's background
Karki was appointed an ad hoc justice at the Supreme Court on January 22, 2009, and a permanent justice on November 18, 2010.
Born in Biratnagar on June 7, 1952, she completed a bachelor's degree in law from Tribhuvan University in 1978. She also has a Master's degree in political science from Banaras Hindu University. Karki has been a member of the International Association of Women Judges since 2010.
She was a senior advocate before being appointed to the apex court in 2009. She was accorded the title of senior advocate in 2004.
Karki was bar association president at the Appellate Court  Biratnagar  for one term until 2004. She was also a   human rights activist until her appointment to the Supreme Court and was associated with the Human Rights Organization and Amnesty International Nepal. Married to Nepali Congress leader Durga Subedi, they have one  son.

Chief Justice Sushila Karki keeps herself out of SC's benches

KATHMANDU, May 7: Chief Justice Sushila karki has resumed her mantle of Supreme Court on Sunday after the impeachment motion... Read More...