KATHMANDU, Nov 3: The State Affairs Committee (SAC) of the lower house of parliament inspected the under-construction Kathmandu-Tarai Fast Track highway on Thursday even as a section of lawmakers on the committee expressed concern over possible clash of jurisdiction with other parliamentary committees.

The National Concern and Coordination Committee of the upper house, which is entrusted with overseeing national pride projects, has already received briefings on the highway project from the Nepal Army, and the Development and Technology Committee of the house is also mandated to oversee development-related activities implemented by the physical infrastructure ministry. But according to parliamentary regulations, the State Affairs Committee doesn't have any oversight jurisdiction over the fast-track project.

“I know the fast-track project is a cross-cutting issue among parliamentary committees. But we decided to visit one section of it as a complaint has been registered with our committee,” claimed SAC Chairperson Shashi Shrestha.

When Chairperson Shrestha proposed forming a sub-committee to study the fast-track during Wednesday's meeting, other members demurred, alleging that they were just trying to misuse army helicopters in the name of inspections.

Parliamentary committees have been competing to encroach the jurisdiction of other committees on major national issues. The National Concerns and Coordination Committee of the National Assembly and the International Relations Committee of the lower house have decided to visit the construction site of the Nijgadh International Airport to inspect the progress of the work and observe the likely environmental effect. Both parliamentary committees want to visit the same project, but they insist on making separate field visits. Also, both committees have asked Tourism Minister Rabindra Adhikari to accompany them.

In another case of competition in jurisdictional overreach, the National Concerns and Coordination Committee of the upper house inspected the tunnel and water supply site of Melamchi Drinking Water Project earlier this month. As if that was not enough, the Committee on Development and Technology of the lower house has also decided to visit the site shortly to study progress at the national pride project.

Earlier, just before Dashain, three parliamentary committees-- National Concerns and Coordination Committee of the upper house and the Industry, Commerce and Consumer Rights Committee and Public Accounts Committee of the lower house -- held separate meetings to inquire with the government about the supply of daily essential goods during festival season.

Last month, two lower house panels -- State Affairs Committee and Women and Social Committee -- summoned Home Ministry and security officials to inquire about progress in the case of the rape and murder of 13-year-old Nirmala Panta in Kanchanpur.

These are just a few examples how different parliamentary committees are belaboring the same issues, showing not only lack of mutual cooperation but also rivalry in overstepping their jurisdictions.

Speaker of the lower house Krishna Bahadur Mahara said he has taken note of the matter and will take necessary steps to avoid such duplication. “We are careful to avoid overlapping among house panels. More than one committee shouldn't engage the same issue. I will hold a meeting with committee chairpersons and direct them to coordinate among each other when there are cross-cutting issues,” he said. 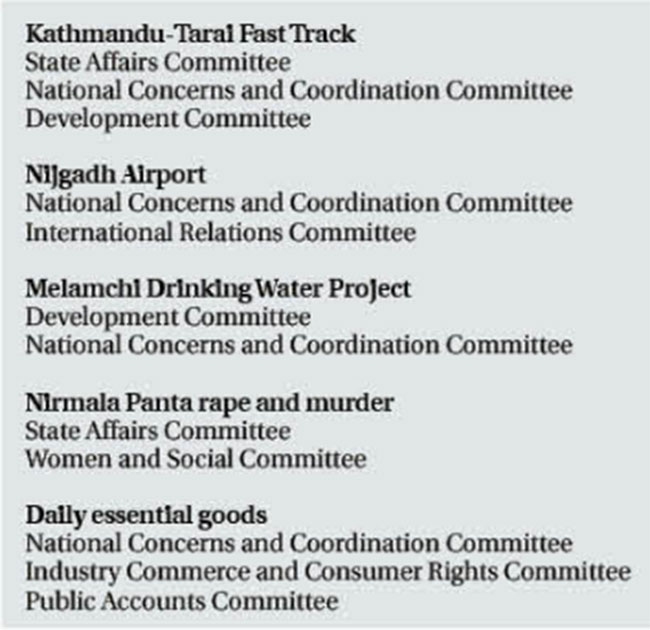 KATHMANDU, July 14: State Affairs Committee of the Parliament (SAC) has directed the government to relocate the people caught in... Read More...

Adjusted civil servants may return to federal level via promotion

KATHMANDU, Feb 16: The lower house of parliament   endorsed the replacement bill for the Civil Servants Adjustment Bill in a... Read More...

9th National Games: Most events including inaugural and concluding ceremony to be held in Pokhara
55 minutes ago