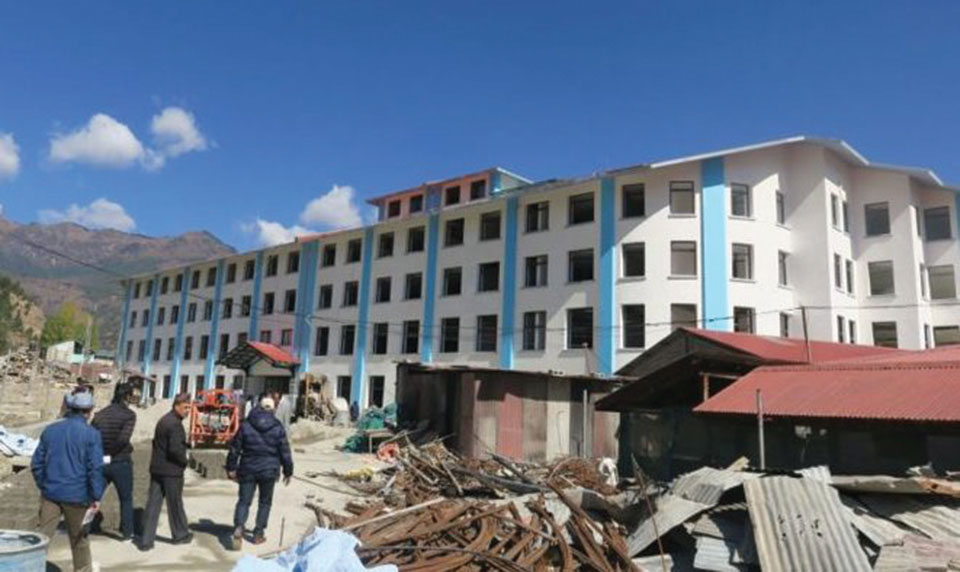 Visitors walk past construction materials on the premises of Karnali Academy of Health Sciences, Jumla in this recent picture. Photo: DB Budha/Republica

JUMLA, Nov 4: Until a few years ago, health facilities were the last thing Karnali region would offer. For small to big health issues, people here had to travel to the capital or other cities in the tarai region. Many would prefer going to India as well. However, things are changing now, thanks to the quality service provided by the Karnali Academy of Health Sciences (KAHS).

Nepali’s village is far away from the hospital. It is in Soru Rural Municipality of Mugu district. He had heard a lot about the hospital. People were full of praises for the hospital’s service. ‘Or else, he would take his father somewhere else’.

“It took three days to reach the hospital,” Nepali said. “One day of walk and two days of travel in bus.” According to the father, his stomach has a ‘mysterious’ problem. And local medicines did not work.

“Sometimes, it does not give me any trouble, sometimes, I feel severe pain inside. I came here for check up,” the father reported, while still lying on bed on Friday afternoon.

The old man, when he came to the hospital, was very fragile. He would have difficulty in having bowel movements. Indigestion always bothered him. Now, he is recovering.

“It was not a rumor that they cure you. They are making me feel far better,” the elderly man smiled. “He was about to take me to Nepalgunj hospital. But then, some of our relatives happen to come here and they suggested us to visit this hospital. It’s near and cheap for us,” he added.

Nepali stated that he was thinking to take father to either Surkhet or Nepalgunj. Both the destinations would require more time and money. “Coming here has helped us save a huge amount,” he said.

The patient is likely to be operated. For this, it may require around Rs 25,000. Had he taken father to other hospitals, the money would not suffice at all.

“When we get sick and have to go to hospital, the worry is not about the charges in hospital alone. What is even troublesome is the travel and living expenses. Now, if Rs 25,000 covers it, we are happy,” Nepali said.

Jayalaxmi Budha of Garjyangkot of Jumla is no less contended with the hospital’s services. She has also come to the hospital with her mother who has been diagnosed with chest infection. Doctors have said that lungs of the elderly lady have swollen.

“I am amazed. Really surprised,” she exclaimed.

When Budha herself had fallen sick earlier, she had gone to a hospital in Lucknow in India for treatment. That had cost her dearly. And now when her mother needed medical intervention, she was equally worried about expenses.

“I thought that I need to arrange a huge sum of money. I had no second thought than taking her to the same hospital in Lucknow,” Budha said. “But to my great joy, there is a good hospital here.”

People take Karnali hospital as a model hospital these days. Even complex cases are handled by the hospital as it has no dearth of staffs and specialists.

“As this hospital offers all types of treatments, people living in this region are releived of concerns. They don’t have to go bankrupt to pay for their medical treatment,” Budha noted.

Budha’s mother has already been treated. She said that a ‘team of doctors had taken her to surgery room for a while and when she came out of the surgery room, the disease was gone!’

“They did not take even an hour to operate. In just few minutes, they extracted out the liquid from her lungs, now she is fine,” Budha reported. “This is a mark of solid development of this region,” she added.

A huge number of patients and their caretakers of the same opinion. Last year alone, the hospital provided service to 48,530 patients.

Considering the growing number of patients the hopsital has been providing services to, it has expanded its services. It has become a popular referral hospital in the region. According to the Director of the KAHS, Dharmaraj Gosain, patients have been visiting the hospital even from India. It is because the service is good and charges are minimum.

“Our patients are mostly from this region including Humla, Mugu, Kalikot and other districts. But for some surgeries, people even from India visit us,” he said. “The charges are very low.”

Gosain said that the hospital has emergency doctors, gynecologists, general physicians, psychiatrists and as such have been able to provide quality medical services to the public.