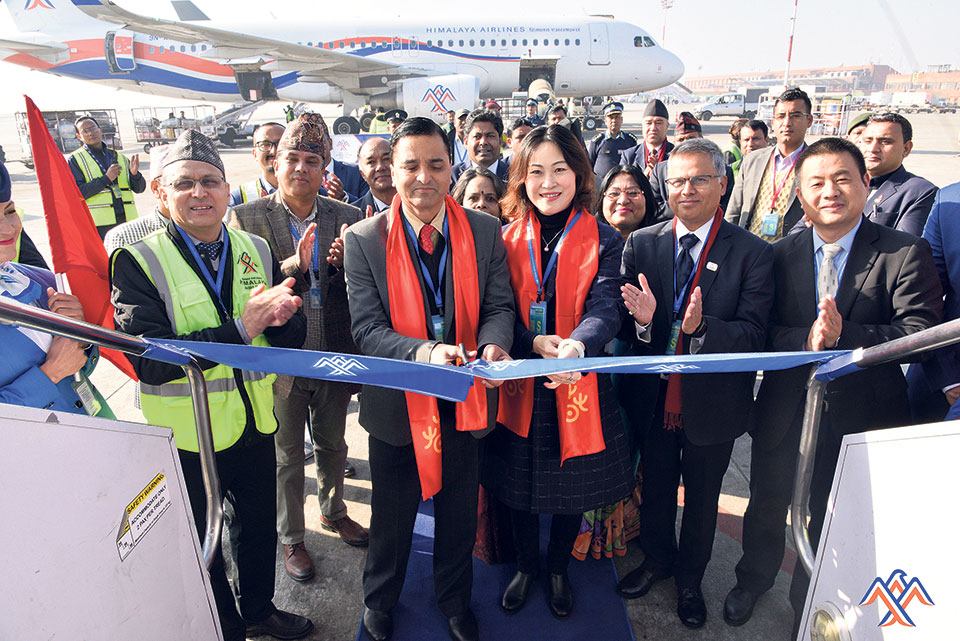 The early departure and afternoon arrival is expected to provide passengers with more flexibility to plan their itineraries, the airline said in a statement.

This is fifth direct flight of Himalaya Airlines to China after Beijing, Guiyang, Changsha, and Shenzhen. The new service is expected to provide greater options for both business and leisure travelers.

Zhou Enyong, president of Himalaya Airlines said: “As Nepal sets off for its global tourism campaign ‘Visit Nepal Year 2020’, the launch could not have got any better timing. With this connectivity, we aim at welcoming more Chinese tourists to Nepal, contributing our share to Nepal’s growing tourism.”

He added that the airline has already carried over 4,200 Chinese passengers to Nepal since it operated its maiden flight to Beijing in October, 2019.

Similarly, Ambassador Yanqi said that the Chinese embassy appreciates the continuous efforts of route expansion by Himalaya Airlines which is bringing the two countries closer day by day. “We extend all good wishes and support to Himalaya Airlines in its endeavor to introduce more routes to connect people and culture of both the countries,” she added.

Congratulating the airlines, Minister Bhattarai said Nepal-China is an important connectivity in terms of promoting bilateral relationships between both the countries.

“With Himalaya’s growing network, we look forward to strengthening the congruence of both the countries on all fronts especially in tourism sector. We wish a great success to the airline,” he added.

Himalaya is the only airline operating direct flights between the two cities. The airline has also plans to fly to Lhasa in the near future. The airline currently operates a fleet of three Airbus A320 aircraft. It also operates scheduled flights to Abu Dhabi, Dammam, Doha, Kuala Lumpur and Dhaka.

‘Who did the government sign a deal with to remove the 7-year system from the Citizenship Bill?’
23 hours ago

Price of gold declines
25 minutes ago