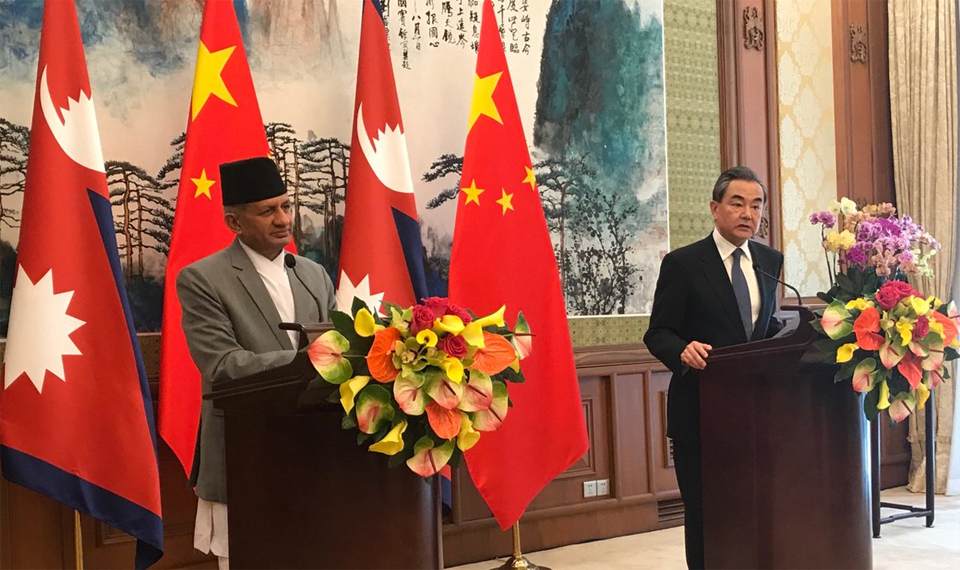 BEIJING, April 18: Nepal is a natural area for cooperation between China and India, the Chinese government’s top diplomat State Councillor Wang Yi said on Wednesday, as he invited India to participate in connectivity projects between the three nations.

The landlocked Himalayan nation has traditionally looked to India for economic support and trade, but Nepal has increasingly been courted by China with transport deals, to New Delhi’s unease.

In 2016 Nepal’s then prime minister, K.P. Sharma Oli, sealed deals with Beijing to use Chinese roads and ports, seeking to reduce Nepal’s dependence on India for trade and transit.

While relations between China and India have been strained in recent years, with spats over everything from their disputed border with Tibet, current Indian Prime Minister Narendra Modi has sought to re-set ties and will visit China in June for a regional summit.

Speaking to reporters after meeting Nepal Foreign Minister Pradeep Kumar Gyawali in Beijing, Wang dismissed the notion that Nepal had to carefully balance its relations with China and India.

“I believe that China, Nepal and India are natural friends and partners. We are neighbors connected by the same mountains and rivers,” Wang said. “As we say in China, family members and neighbors wish each other well.”

Support for Nepal’s development should be a common understanding between China and India, he added.

“Nepal stands as a natural beneficiary for cooperation and development from China and India. I think this is a logical desire that should be supported by both China and India,” Wang said.

China and Nepal have agreed to a long-term vision for a cross-Himalaya connectivity network, part of China’s Belt and Road Initiative, he added.

“We believe that such a network when well developed can also create conditions for an economic corridor connecting China, Nepal and India. We hope that such cooperation can contribute to the development and prosperity of all three countries.”

Gyawali, visiting Beijing about a week after Oli was in New Delhi, said he and Wang had agreed to start a feasibility study for a cross-border railway linking Nepal and China.

“Personally I have a dream, to travel to China from Nepal across the Himalayas in a modern train, enjoying the scenic beauty of the Himalayas,” he added.

KATHMANDU, April 20: Minister for Foreign Affairs Pradeep Kumar Gyawali has stated that it was a moment of pride for... Read More...

KATHMANDU, April 2: Newly-appointed Minister for Foreign Affairs, Pradeep Kumar Gyawali has said that there is no alternative to excellent bilateral... Read More...

The way Balen has come forward is positive: Dahal
31 minutes ago