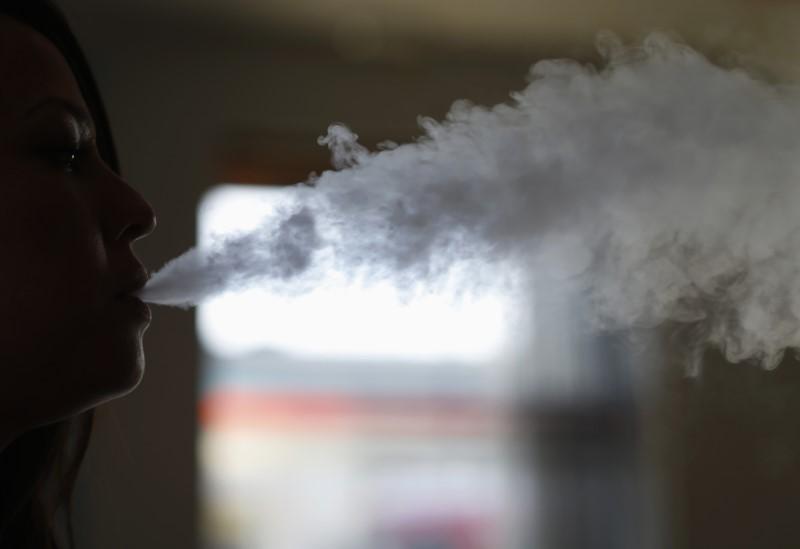 REUTERS. Oct 24: Teens who vape, or use e-cigarettes, may be more likely to develop a regular smoking habit when the liquid they use in their vaping devices has higher concentrations of nicotine, a U.S. study suggests.

The adolescents who started out using e-liquid with high nicotine levels were more than twice as likely to regularly smoke traditional cigarettes by the end of the study as vapers who used nicotine-free liquid, researchers report in JAMA Pediatrics.

High nicotine liquid in e-cigarettes was also associated with 65 percent higher odds that teens would develop a regular vaping habit.

“The results of this study suggest that nicotine in e-cigarettes may be responsible, at least in part, for the association between e-cigarette vaping and later smoking of conventional cigarettes in youth,” said study co-author Adam Leventhal, director of the University of Southern California’s Health, Emotion, and Addiction Laboratory in Los Angeles.

“Because nicotine may harm the developing adolescent brain and increase the risk of attention problems and depression, continuous exposure to nicotine, even through e-cigarettes, is a concern,” Leventhal said by email. “Teens should not start experimenting with nicotine and tobacco products in any form.”

Big tobacco companies, including Altria Group Inc, Lorillard Tobacco Co and Reynolds American Inc, are all developing e-cigarettes. The battery-powered devices feature a glowing tip and a heating element that turns e-liquid into a cloud of vapor that users inhale.

The liquid may contain nicotine, flavorings, and other ingredients.

For the current study, researchers examined data on 181 students from high schools in the Los Angeles area who were surveyed once during tenth grade and again in eleventh grade.

All of the participants had vaped at least once in the past 30 days when they were initially surveyed. They reported nicotine concentrations for their e-liquid, ranging from none to as high at least 18 milligrams per milliliter.

Beyond its small size, another limitation of the study is its reliance on youth to accurately recall and report on what was in their e-cigarettes and how often they vaped or smoked, the authors note. It’s also possible that factors not measured in the study might influence whether teens developed more regular vaping or smoking habits over time.

Still, this study adds to evidence that e-cigarettes are not risk-free, said Thomas Wills, a researcher at the University of Hawaii Cancer Center in Honolulu and the John A. Burns School of Medicine.

Many people who try e-cigarettes don’t go on to become heavy smokers, Wills, who wasn’t involved in the study, said by email.

“But even experimenting will increase your odds of becoming a smoker,” Wills added. “These studies show that if you start using e-cigarettes, even infrequently, you are stepping onto a slippery slope and it is hard to tell where you will end up.”

Smoking just a cigarette doubles the risks of sudden death for babies: Study

Smoking even one cigarette a day during pregnancy can double the chance of sudden unexpected death for your baby, according... Read More...