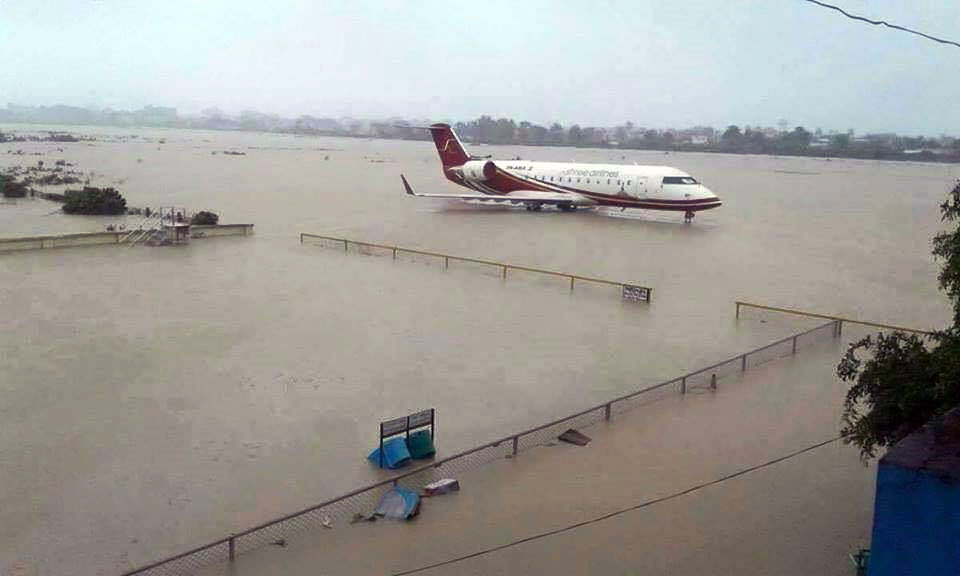 KATHMANDU, Aug 12: Flights to Biratnagar and Bhadrapur in the eastern Nepal from Kathmandu were halted Saturday due to heavy rainfall since the past few days. Incessant rains have completely inundated the airport of Biratnagar while there were no flights to Bhadrapur due to poor weather.

Several other flights to the eastern region were delayed or canceled due to downpour in the region.

Sending tweets, Nepal’s major domestic carrier Buddha Air has informed that all of its flights to Bhadrapur, Biratnagar and Tumlingtar were cancelled till Sunday.

Likewise, flights to Janakpur and Simara were delayed. All the flights to Bharatpur except the last flight were canceled due to heavy rainfall in Chitwan district in mid-Nepal as well. However, flights to Pokhara in western Nepal and Dhangadi in far-western Nepal took off on time.

Buddha Air has informed its passengers of the flights cancelation by posting messages on its Facebook and Twitter accounts: “After heavy rainfall, the Biratnagar runway has been disrupted by floods; so, all the flights to Biratnagar have been canceled till Sunday.”

Similarly, Yeti Airlines has also canceled all its flights to Biratnagar and Bhadrapur on Saturday. According to the airlines, one flight for Bharatpur flew off from Kathmandu after 12 pm.

As the runway of Biratnagar Airport has been submerged by floods, airlines companies have said that the flights may be affected on Sunday, and it might be extended for a few more days.  Another domestic carrier, Saurya Airlines, also cancelled its flights for Biratnagar and Bhadrapur. However, it has not taken a decision yet on when to resume those flights.

Likewise, Nepal Airlines Corporation (NAC) has canceled all its flights for Khanidada, Bhojpur and Biratnagar on Saturday. “Due to heavy rainfall, we cancelled flights to Khanidanda, Bhojpur and Biratnagar,” Sailendra Kansakar, joint spokesperson for NAC, said: “Biratnagar airport has been totally affected by rainfall. However, other flights might resume from Sunday depending upon the weather condition.”

According to him, NAC flights to Pokhara, Simara and Dhangadi were on time. According to Tribhuvan International Airport officials, only the domestic flights have been affected. The international flights operated on time.  An aircraft of Shree Airlines, used for crew member’s training, has been stuck in Biratnagar airport runway due to floods.

Domestic airlines cancel half of their flights from Pokhara

POKHARA, Dec 7: Domestic airline companies have canceled more than half of their flights scheduled for Thursday, citing provincial and parliamentary... Read More...