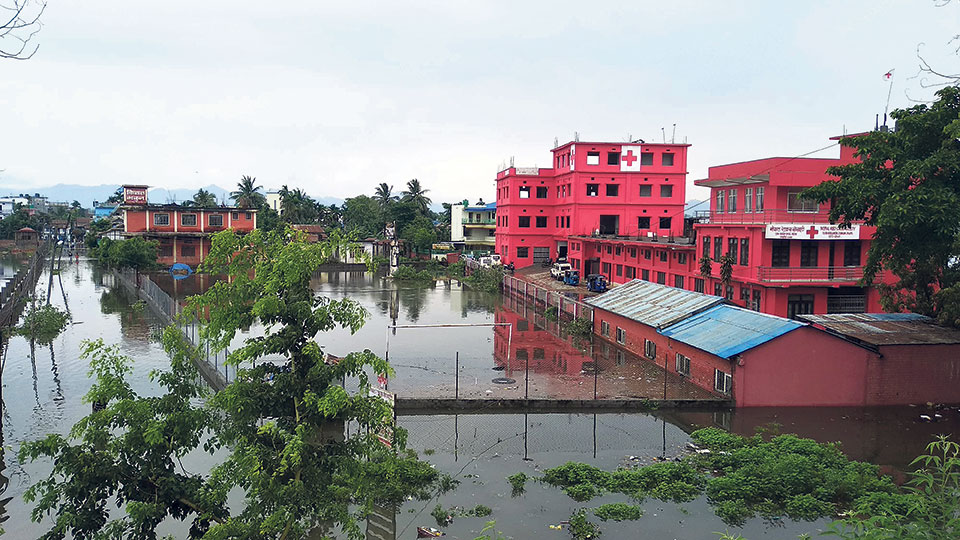 Damak Hospital which got inundated after heavy rainfall on Saturday. Photo: Republica

DAMAK, June 24: Incessant rainfall on Friday evening and Saturday morning has submerged the city area of Damak yet again. Lack of proper management of rain water in Damak often results in inundation.

The places like bus stations and Damak Hospital which are crowded with people have been submerged. Every monsoon, Damak Red Cross, Kirant Bhawan, Damak Chamber of Commerce and Industry among others get submerged due to rain water.

Encroachment of river, streams and sewer along with unmanaged settlements are the reasons behind the inundation, according to Santosh Dulal, a social activist of Damak.

“Despite drawing the attention of the responsible authorities time and again, this problem has not been addressed,” said Dulal.

Dipini River, which flows through the main market of Damak, leads to inundation every year. As the locals have made their houses by encroaching upon the river area, the flow of water has been affected. Especially, ward 5 and 9 of Damak have high risk of inundation. Indra Gurung, chief of Damak-5, informed that efforts will be taken by the municipality to remove families living in the riversides by encroaching upon the river. According to him, locals living along the riverside have been time and again told to vacate the area but still they always neglect the order.

“We can’t let the activities of those people inundate the whole market. So, we will have to remove them from the river banks within this year,” said Gurung.

Inundation led by heavy rainfall made it difficult for the people in Damak to come out of their houses. “If river encroachment is not controlled, we might have to deal with disaster in the near future,” said Rishiram Ghimire, a local.

In the absence of proper way for the flow of water, bus station of Damak was covered with 2 feet of water on Saturday. Patients kept at the emergency room of Damak Hospital were shifted after the hospital submerged with water.

Mercury on rise in Kathmandu, heavy rainfall expected in some places

KATHMANDU, July 19: The Weather Forecasting Division of the Department of Hydrology and Meteorology has predicated a possibility of heavy... Read More...

BIRGUNJ, July 2: The first rainfall at Birgunj has flooded main city area and other parts of the districts, including... Read More...

GAUSHALA, April 20: The torrential rainfall with strong wind has caused big damages in different villages of the district. ... Read More...