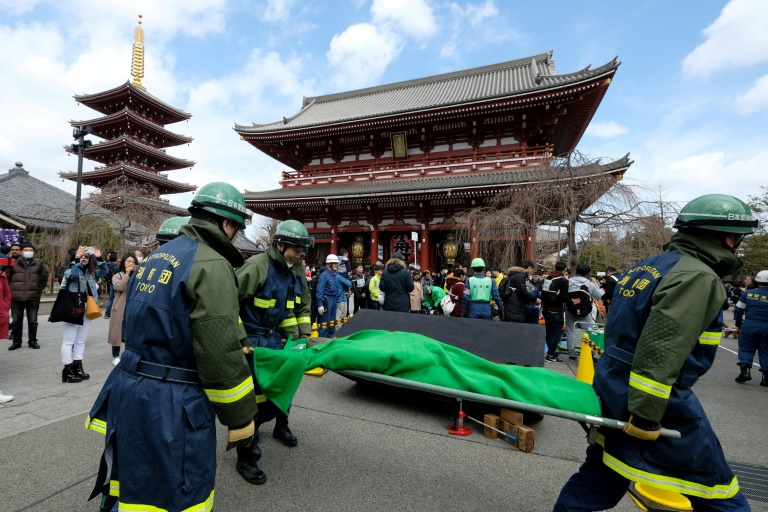 Cyberattacks, terrorism, earthquakes and heatwaves: Tokyo 2020 organisers are hoping for the best but bracing for the worst and making contingency plans for several possible catastrophes during the Games.

Clean, virtually crime-free Tokyo has been spared the terror attacks that have hit many Western cities in recent years, and is considered a relatively safe bet for the Games -- it is often ranked as low-risk by insurance and risk-management firms.

But that security goes out of the window when it comes to hosting the Greatest Show on Earth, says Shiro Kawamoto, counter-terrorism expert and professor of risk management at Nihon University.

"Tokyo's safeness in normal times cannot be taken for granted during the Olympics when the world's attention is on it," Kawamoto told AFP.

So Tokyo is pulling out all the technological stops to bolster safety -- for example, in an Olympic first, introducing a facial recognition system for volunteers.

Organisers are also bracing for a cyberattack similar to that which blighted the 2018 Pyeongchang Winter Olympics opening ceremony, where internet and wifi access were brought down.

"We are preparing on the assumption there will be a cyberattack," said Kenji Endo, a senior government official in charge of Tokyo 2020.

The government has set up an elite unit of police and defence ministry experts to counter a possible cyber threat.

For terrorist attacks, Tokyo has not experienced a large-scale atrocity since the Aum Shinrikyo doomsday cult released Sarin gas on the subway in 1995, killing 13 people and injuring dozens more.

But an attack on New Year's Eve -- where a man deliberately rammed a car up one of Tokyo's best-known streets and injured nine people -- jolted Tokyo out of its complacency.

Counter-terrorism drills are being conducted regularly and officials are urging the public to be vigilant.

With petty crime much lower than in other major capitals, people generally pay little attention to abandoned baggage, for example.

"To avoid a suspicious object in a train suddenly exploding, someone has to spot it and call police or station staff," Kawamoto said.

The ever-present threat of natural disasters is also keeping Olympics officials up at night, with Tokyo being one of the world's most seismically active capitals and Japan battered last year by typhoons and heatwaves.

"As for natural disasters, we think the biggest challenge is to prepare for a big quake that is impossible to predict," said Akio Sato, senior official at the Tokyo Metropolitan Government.

Rigid building codes mean even strong tremors often do little damage but the government estimates up to 23,000 could die if a magnitude seven quake hit Tokyo directly.

Panic and a lack of preparation could cause more unnecessary damage, experts warn.

Mindful that hundreds of thousands will be coming from overseas, the Japan Tourism Agency has upgraded its "safety tips" app with information on major disasters, evacuation shelters and medical organisations.

The 2020 Games will take place "during the most dangerous period -- in the middle of typhoon season," Nobuyuki Tsuchiya, head of a Tokyo environmental organisation, told AFP.

If similar typhoon-created high tides were to hit Tokyo, the water "will not be gone for about two weeks," said Tsuchiya.

Floodwater could drain into the city's massive subway system and inundate not only transport but also underground malls in other parts of the city, Tsuchiya warned.

In response, Tokyo Metro, the Japanese capital's largest subway operator, has been scrambling to set up watertight doors at some 400 subway entrances in case of flooding.

Organisers have had to take expensive measures to combat the heat during the Games, which are taking place at the height of the sweltering Tokyo summer.

The start time for the marathon has been moved to early morning and organisers plan heat-busting measures such as water-sprinklers along the route, swelling the event's budget.

Authorities should also study "contingency plans including a decision to suspend the event," said Toshitaka Katada, professor of disaster prevention at the University of Tokyo.

"That kind of decision-making tends to be delayed" if not discussed in advance, especially regarding who decides the cancellation and in which circumstances, he said.

Any such decision would be taken by the IOC, while "the Japanese government will give necessary advice over important security issues," said government official Endo.

Toyko 2020 official Kaho Akiyama said organisers were prepared to deal with a crisis if it arises.

"To help deal with any emergencies, we are preparing evacuation plans for each venue, and are considering the offer of multilingual support to facilitate prompt and smooth evacuation," she told AFP.

Earthquake causes Tokyo buildings to shake ahead of Trump visit