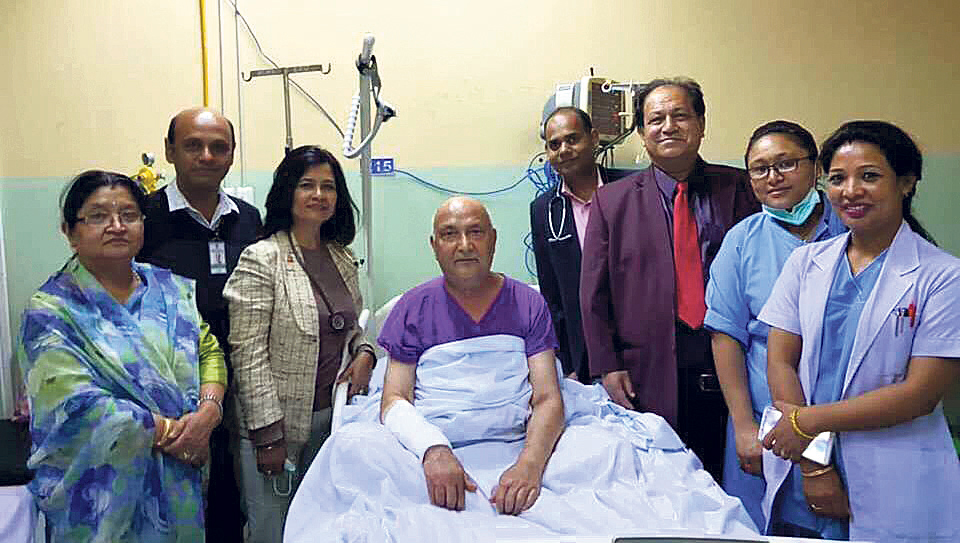 Isn’t it ironic that a resident of Rautahat dies due to lack of dialysis whereas a public hospital at the capital city performs international standard surgery?

Prime Minister KP Sharma Oli set a historic precedent by having his second kidney transplantation in Tribhuvan University Teaching Hospital, a public hospital, inside the country. According to the hospital, his operation was successful, and he is desperately waiting to join the office. Neglecting suggestions from his relatives and kitchen cabinet, he took a bold decision to receive treatment from public hospital and this decision can have great ramifications in the country’s health sector. For one it has discontinued an established trend of seeking medical care in foreign countries by the established politicians even in the case of minor medical conditions. Further, this unprecedented action by an executive head has given a strong message that Nepali doctors are capable of performing international level surgeries in low resource settings. It is a cornerstone event in Nepal’s medical system that has encouraged and will encourage doctors to excel in their knowledge and skills. Further, if this level of trust is maintained by other politicians in the upcoming days, the government can save a significant amount of money collected from the taxpayers.

But let me take you to the incident that occurred six months ago and that triggered strong public anger against the government. Ruplal Shah—a 35 years old patient having kidney failure who headed to Kathmandu from Rautahat for dialysis—died on the way due to traffic congestion. He was stuck in the traffic jam for 12 hours until he breathed his last. I don’t want to exaggerate the incident, but when we compare these two events, we can easily see that there is a huge disparity in the availability and accessibility of health care services between those in power and those on the ground. Isn’t it ironic that a resident of Rautahat dies due to lack of dialysis whereas a public hospital at the capital city performs international standard surgery? Although it is praiseworthy to observe world-class surgery in the capital city, it is equally distressing that sick people in the countryside are dying due to otherwise preventable and treatable illnesses.

This disproportionate advancement in the health care services within the country is disastrous for the needy people suffering from complicated illnesses who can’t have easy access to health care due to unavailability or who can’t afford health care due to exorbitant price. To simplify, there are three groups of people who suffer. First, the middle-class patients with complicated illnesses, who expect to afford the cost of private hospitals, and get health care services. But they have to bear with the catastrophic cost of care leading to gruesome ramifications in their subsistence. Second, the middle-class patients suffering from complex illnesses, who expect to get services from public hospitals of the cities. They have to stay there for a couple of weeks or even months eventually leading to the high cost of care. As a result, they also suffer from financial hardship due to high indirect costs. And third, the lower-class patients, who can’t think of both of the options, visit public health care facilities near them but which usually don’t have facilities to manage complicated illnesses. Either they get supportive care, or they should wait to die. This is a bitter truth of the middle and lower-class patients with complicated illnesses.

Existing efforts
To address affordability and accessibility issues of health care, the government has initiated various programs in recent years.  But these programs are politically famous but pragmatically ineffective. In 2007, the government of Nepal introduced Free Health Care Policy. Under the provision of this policy, all health posts and primary health care centers are rendering free health care services to all the users whereas the public hospitals are providing free health care to specific groups of people including poor, disadvantaged and marginalized populations. However, public health facilities usually lack essential medicines and health care equipment along with the shortage of human resources. As a result, people’s trust in public health facilities is declining.

Following the movement of Universal Health Coverage (UHC) endorsed by the United Nations in 2012, the Nepal government launched a national health insurance program in 2016 and is planning to expand it all over the country by the end of this fiscal year. However, this highly ambitious program is not gaining momentum. As of December 2, 2019, only 18 percent population of 49 districts have enrolled in the program. The main challenges are low enrollment, declining renewal-rate of existing beneficiaries, and increasing dependency over public health facilities without proper improvement in health care services. Further, there is an increasing gap between premium collection and total reimbursement indicating a great challenge toward the sustainability of the program.

What next?
The internationally accepted three main pillars of the health care reform are: access to care or health insurance, cost control, and quality of care. What we are doing at present is fragmented reform which means we are addressing only one dimension of reform. Even the reform in health insurance is highly fragmented. Therefore, we need comprehensive health care reform. Private hospitals are mushrooming along with the adoption of advanced technology which means the cost of care will obviously soar.

We have not even thought about the increasing cost of care. For that, the government should make a clear vision regarding the privatization of health care. It is imperative to decide to what extent private hospitals should be regulated in terms of their establishment, cost of care and quality of care. More importantly, it is essential to enhance the quality of care in public health facilities not only to gain public trust but also to save the lives of needy people. To plan such comprehensive reform, we need intensive research across all three dimensions because we severely lack data. At the same time, health reform should be data-driven rather than donor-driven or opinion-driven.

If we don’t formulate a long-term vision backed up by strategic short-term and medium-term programs, our health system will become highly complex, fragmented and inefficient. The people like Ruplal Shah who are in desperate need of health care but can’t afford and access appropriate care will suffer the most.

I wish prime minister would recover soon and join the office, but at the same time, I also wish he would take some bold steps toward health care reform similar to the decision of his second renal transplantation after he resumes work.

The author, Public Health Officer in the Ministry of Health and Population, is studying health policy at Yale University

KATHMANDU, Sept 24: The health condition of Dr Gobinda KC, who is on a fast-unto-death at Tribhuvan University Teaching Hospital,... Read More...