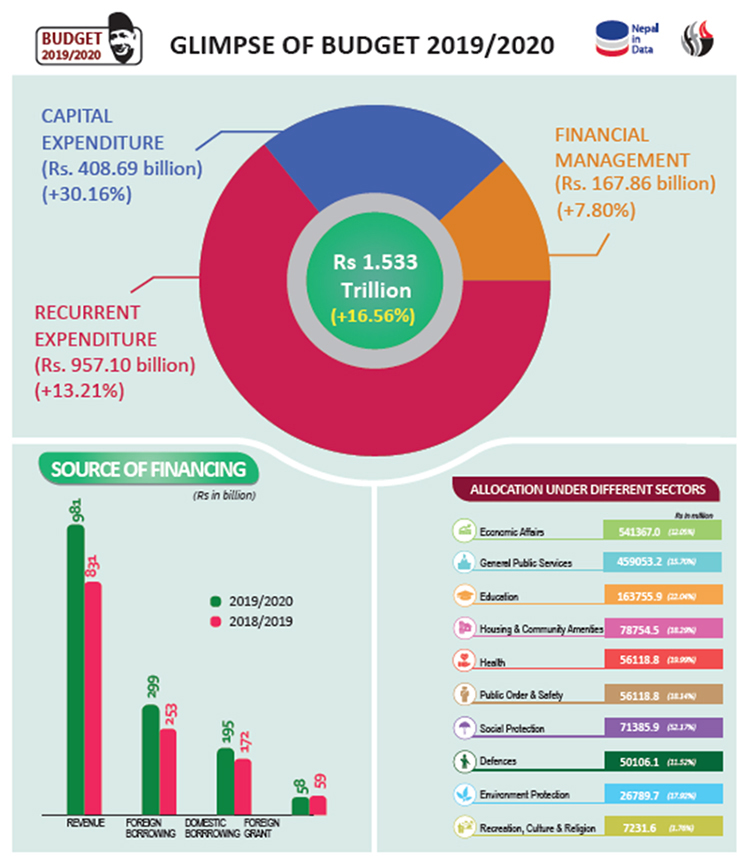 KATHMANDU, May 30: The government has unveiled a budget of Rs 1.53 trillion for the upcoming fiscal year 2019/20 without introducing any notable new development project while raising the rates of major taxes and increasing allocations for distributive programs.

However, the budget has raised the social security allowance for elderly citizens, hiked the salary of government staff and increased funds for parliamentarians for development work in their constituencies, with an aim to appease one and all. This has contributed to a surge in the budget size for the upcoming fiscal year by nearly 17 percent compared to the budget of the current fiscal year 2018/19.

Presenting the budget for fiscal year 2019/230, Minister for Finance Yuba Raj Khatiwada said that the government has allocated Rs 957.1 billion (62 percent)  for recurrent expenditure, Rs 408.59 billion (27 percent) for capital expenditure and Rs 167.8 billion (11 percent) for financing purposes for the implementation of its policy and program.

Upbeat over the growth momentum in the last few years, the government has set an economic growth target of 8.5 percent for the upcoming fiscal year 2019/20.

Economists say the revenue collection target set by the budget has been high given that the government struggled to meet the revenue target in the current fiscal year. While the foreign grant target has remained almost the same as in the current fiscal year, there are worries that the government’s plan to mobilize domestic debt to the tune of Rs 195 billion may put further pressure on interest rates amid a liquidity crunch in the market.

The government has decided to give continuity to most existing development projects. However, there has not been any announcement of new major ‘transformative’ projects that many had expected from a government that commands a two-thirds majority in  parliament.

“The finance minister looks tired, risk-averse and crowd-pleasing. He should have taken a bold and unpopular decision toward making the economy stronger,” said Swarnim Waglé, an economist who is also a former vice-chair of the National Planning Commission (NPC). “This budget shows that the political capital of the government with a two-thirds majority has weakened in its second year, not a good sign for the country,” he added.

The second budget introduced after the advent of federalism has also increased  fiscal transfers to sub-national governments.

According to the budget speech, the federal government plans to send Rs 55.3 billion to the provinces and Rs 89.95 billion to local units under fiscal equalization grants in the upcoming fiscal year. In addition to that, the provinces will receive Rs 44.55 billion while local units will receive Rs 123.87 billion in conditional grants, according to Finance Minister Khatiwada.

The current government has not been able to do anything substantive on governance and service delivery in the last three... Read More...