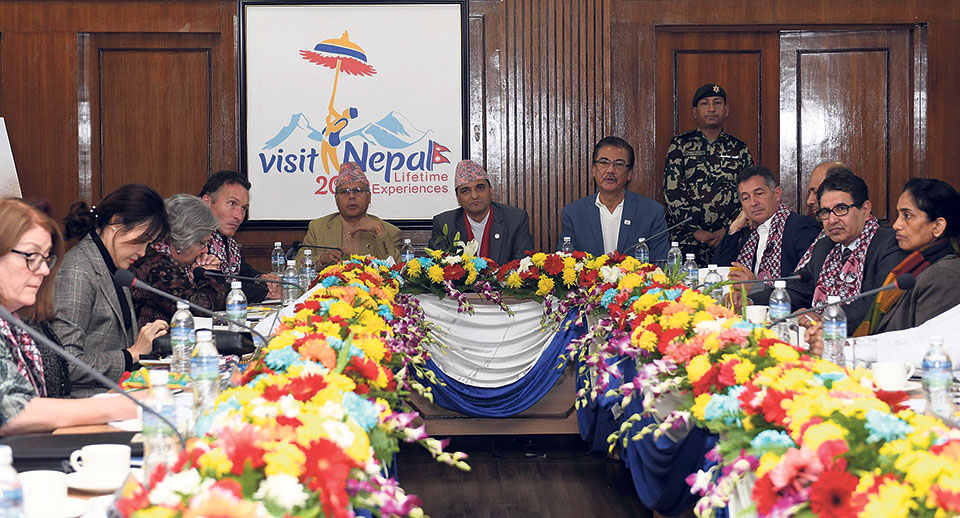 Speaking at meeting with ambassadors of 31 countries and heads of five bilateral and multilateral development partners at the ministry on Wednesday, Bhattarai urged them to help Nepal in promoting VNY 2020 in international markets.

“We want your help in disseminating the information and message of VNY 2020 in your countries,” a statement issued by the ministry after the meeting quoted Bhattarai as telling the diplomats and heads of development partners. “My request to you all is to celebrate your Christmas and New Year’s Day in Nepal to promote Nepal as a tourism destination,” said Bhattarai.

He said the government would make 'tourism diplomacy' as a part of bilateral ties with other countries. Bhattarai also sought the help of the ambassadors to bring their tourism minister in Nepal for the inaugural session of the VNY 2020.

The government has already sent invitation to tourism ministers of 40 countries to attend the inaugural ceremony of the VNY2020. By celebrating 2020 as Visit Nepal Year, the government has set a target to bring over 2 million tourists into the country.

During the meeting, Bhattarai also thanked the dignitaries for their supports in the aftermath the 2015 earthquakes. “We want your support in the same spirit for the Visit Nepal Year 2020,” he added.

Stating that tourism sector contributes 3% in the Gross Domestic Product (GDP) of the country, he shared the government's target to raise the share of tourism sector in the GDP to 10% as stated in the country's 15th Periodic Plan (Fiscal Year 2019/20-FY2023/24). Among others, the government has set a target of increase average tourist spending to US$ 80 from $44, and attract 3.5 million tourists annually over the period of five years.

AMBASSADORS VOW TO SUPPORT VNY2020
Speaking at the meeting, ambassadors expressed their commitment to help Nepal for the success of the year-long tourism promotion event, according to the statement issued by the ministry.

“We are always ready to help Nepal in making the Visit Nepal Year 2020 a success,” the statement quoted Hou Yanqi, the ambassador of China, as saying. Stating that China stands second in the list of source countries for tourists in Nepal, the Chinese Ambassador said that Chinese companies were constructing two international airports in Nepal.

Similarly, US ambassador to Nepal Randy Berry said the US embassy would help Nepal in sending promotional material to the US for distribution if the government made it available.

I have no involvement in making Hamal a minister: Chief Justice Rana
11 hours ago

Over 100,000 Pfizer vaccines to arrive in Nepal on Monday
11 hours ago

I have no involvement in making Hamal a minister: Chief Justice Rana
11 hours ago