Government moves to hand over Dharahara project to NT 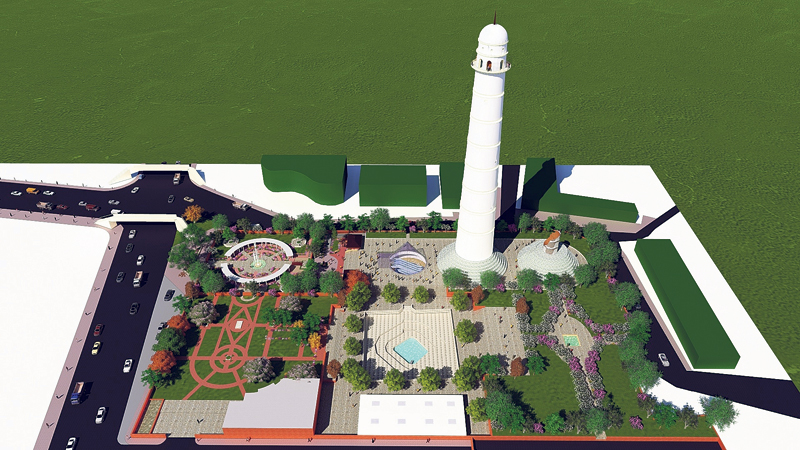 KATHMANDU, Aug 19: The government has started preparations to hand over construction of the new Darahara tower to Nepal Telecom (NT).

As per a cabinet decision of mid-July, government bodies have started preparations for signing a memorandum of understanding (MoU) with NT for the construction of the new tower. The cabinet had decided to accept NT's proposal for the tower construction.

The MoU will be signed after the Department of Archaeology (DoA) finalizes a detailed design. The DoA is all set to finalize the design soon, according to DoA officials.
The government decided to build a modern Dharahara right next to the ruins of the two centuries-old tower which collapsed in last year's devastating earthquake, killing over 50 people.

“We need a huge amount of money to construct a new Dharahara along modern architectural lines. And NT is ready to put up the money. So, we are signing the MoU soon,” said Prem Kumar Rai, secretary at the Ministry of Culture, Tourism and Civil Aviation (MoCTCA). NT has stated that it will spend Rs 3 billion on the tower.

The government had formed three different committees to make necessary preparations and hand over the construction task to NT. “The new tower will have a look similar to the old structure. NT will build it in consultation with  DoA and in keeping with archaeological values,” he added.

Under a six-month old campaign started by the Oli government, funds totalling Rs 22.5 million have been collected from the public for the new Dharhara. Those funds will be turned over to NT.

“The government has been raising funds from the public, but as this will not be enough for the purpose, NT will foot the rest of the construction  bill,” Rai said.

Dinesh Kumar Thapaliya, secretary at the Ministry of Information and Communications (MoIC) who is also NT chairman, said that NT is capable of constructing the new tower along modern design lines.

He said the MoU will set out clear construction criteria and the document will be signed by NT, MoIC and MoCTCA.

The DoA earlier this month unveiled the detailed design for the proposed 245 feet-high new Dharahara.

The new tower will have an  underground museum and a lift.

The nearby Mint Department will be turned  into a numismatic museum and there will be a two-storey underground parking facility where the post office is now located next to the historical Sundhara (Golden Water Spout).

Women work hand in hand to construct a bridge

BHOJPUR, July 23: Women of Okhre -9 at Bhojpur district have constructed a wooden bridge at Bantang River on their... Read More...