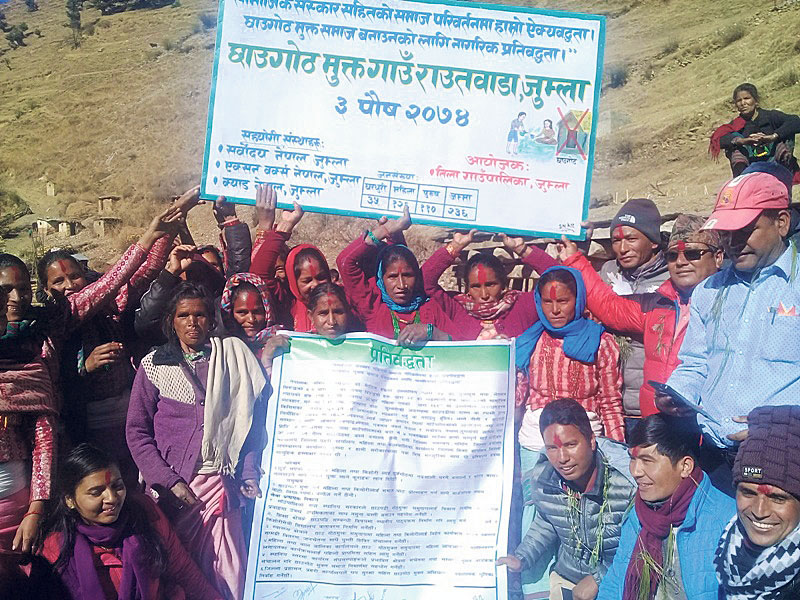 JUMLA, Dec 29: Laulunath Yogi of Tila-9, Rawatwada in Jumla is a renowned shaman of his village. Few months ago, he was someone who could not stand a menstruating woman even in the compound of his home. Like many other villagers, he believed that menstruating women are impure and their touch would make the god furious.

He often delivered long lectures to those who tried change the traditional malpractices associated with menstruation. The word 'menstruation' used to get on his nerves. However, Laulunath is a changed person now.

People find it hard to believe that the same person these days is found advocating about women's health and hygiene.

He now believes that women can stay at their home even during periods.
"I have now realized that 'Chhaupadi' is an ill practice introduced in the patriarchal society to repress women," Laulunath said, adding, "It's a natural process and I urge girls and women to rather concentrate on their health during periods."

According to him, empowerment of women is not possible unless such traditions are uprooted from our society.

Similarly, Singhanath Yogi is one of the most respected priests in the village. Not many had expected that a traditional priest like him would ever allow female members of his family to stay at home instead of sheds during menstruation. He now is aware that a menstruating woman might suffer from various kinds of infections and other health problems if banished in sheds.

Lalunath and Sighanath are just the representative cases as there are so many traditional-minded people like them, who, in the recent years, have accepted menstruation as a natural process.
There was a time when women in rural areas used to get frightened by the name of 'shamans'. But now, they no longer fear the shamans, who are now quite familiar with their problems.

Poonam Pandey, a local of the same village, informed that they have initiated a campaign to free women from Chaupadi sheds in the coordination with the shamans and priests.
Women's health has emerged as a major concern of late for the people here. Breaking the traditional stereotypes, many women like Poonam have not dared to go to the kitchen and cook meals for their family even during periods.

"Shamans don't have objection with it anymore and I don't think I have angered my gods either," said Poonam. These days, very less women stay in sheds during menstruation.

Menuka Yogi is said to be the first woman to rebel against the tradition and return to her home from the shed while her period was still running.

Her decision raised a lot of eyebrows at that time. Many of her neighbors started talking behind her back that her decision will eventually lead to the destruction of her dynasty. However, most of the shamans and priests supported her by remaining mum at that time.

"Patriarchy still rules in our society but I am glad that our age-old traditions are changing gradually," said Menuka.
There are altogether 35 households in Rawatwada. With the changing perspective, women of this village are no more compelled to live in sheds during menstruation. In fact, women along with men, have launched a campaign to abolish Chaupadi completely from the villages. Almost all the families have assured that they will not isolate the females in sheds and will also provide them with nutritional diet during menstruation. Locals have assured that the girls who refuse to live in sheds during periods will not be ostracized in schools or any public places.

Not just in Rawatwada but this campaign has been widely initiated in the only municipality and all eight local units of the district. Besides that, preparations are underway to include lessons against Chaupadi in course books of schools in addition to construction of girls-friendly schools, conducting awareness programs for women's health, and distribution of heath materials among others.

The District Administration Office (DAO) and District Police Office (DPO) have promised to play vital role in this campaign for the empowerment of women. As stated by Tek Bahadur Budha Thapa, acting chief of the DAO, Chaupadi has been criminalized by law. So, the locals have been told to abide by the law. He also appreciated and praised the initiative taken by the shamans and priests of the village.

Meanwhile, Ratannatah Yogi, chairperson of Tila Rural Municipality, expressed his happiness toward the society adopting equality. Women are expecting that they will no longer have to be ashamed or embarrassed for being women as the campaign has been supported by the DAO, DPO, District Coordination Committee (DCC) and various I/NGOs.

It is commendable that the shamans, who once regarded menstruating women as untouchables, are suggesting them to say 'no' to sheds during periods. Santake Rawat, 80, another shaman of Tila Rural Municipality-5, Dungri suggests women to adopt precautions and take special care of their health and diet during the seven days of menstruation.

As per the laws, no woman should be subjected to any kinds of violence, discrimination and inhuman treatment during pregnancy or menstruation. Any person violating women's rights and mistreating them during such times will be strictly punished.

Caption: Women along with shamans and priests of Rawatwada declaring their village 'Chaupadi free'.