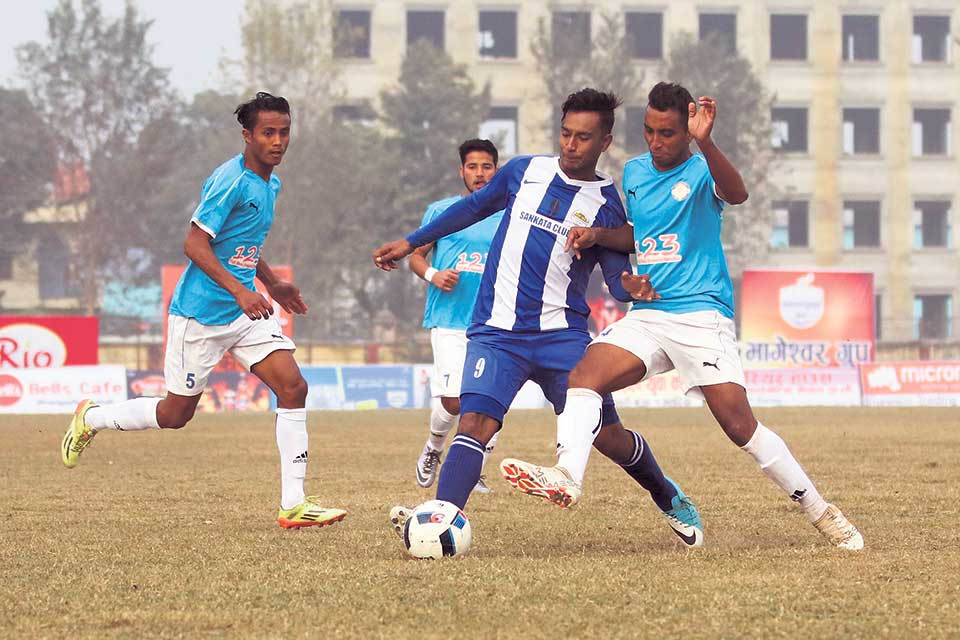 Players of CMG Sankata Club (center) and Dharan Football Club in action during a match of the Khaptad Gold Cup football tournament in Dhangadhi, Kailali on Sunday.

Sankata won in the seventh penalty attempt after the match was pushed to sudden death as full and extra time ended in goal-less draw. Dharan was knocked out of the tournament after they failed to convert a penalty chance in the first half of the match played at the Dhangadhi Stadium, Kailali. The shot of Dharan’s Prakash Budhathoki was stopped by Sankata goalie Binay Shrestha.

Dharan’s forwards remained wayward in front of the post missing out on no less than 12 chances throughout the match.  Binay Shrestha continued his heroics by saving three more penalties during shoot-out and sudden-death to deliver his team a victory. Shrestha won ‘Medical Studies and Health Sciences’ man-of-the-match for saving four penalties on the day. He received Rs 10,000 in cash prize.

Sankata’s coach Salyan Khadgi said that they were under pressure during the first half of the match. Players were tired due to the long ride, but they managed to perform better in the second half, Khadgi said.  On the other hand, Dharan’s coach Ashok Rai was satisfied with his team’s performance. He said that the team lacked knowledge about the pitch, which affected the match leading to their defeat.

Three Star returns
Ruslan Three Star Club and Jhapa XI will lock horns on Monday, in the former’s first appearance in a domestic event after a break of more than 18 months. Due to some mismanagement by All Nepal Football Association (ANFA), Three Star had stayed away from playing domestic football. ANFA’s negligence had deprived Three Star of the playoff round at the reputed Asian league, Asian Football Confederation (AFC) Cup, last year. ANFA had not registered the club’s name on time despite Three Star winning the first stage qualification round to feature in the AFC playoffs. That resulted in a stalemate between the club and the association. ANFA agreed to pay a compensation of Rs 15 million to the club, which prompted it to participate in the Khaptad Gold Cup.