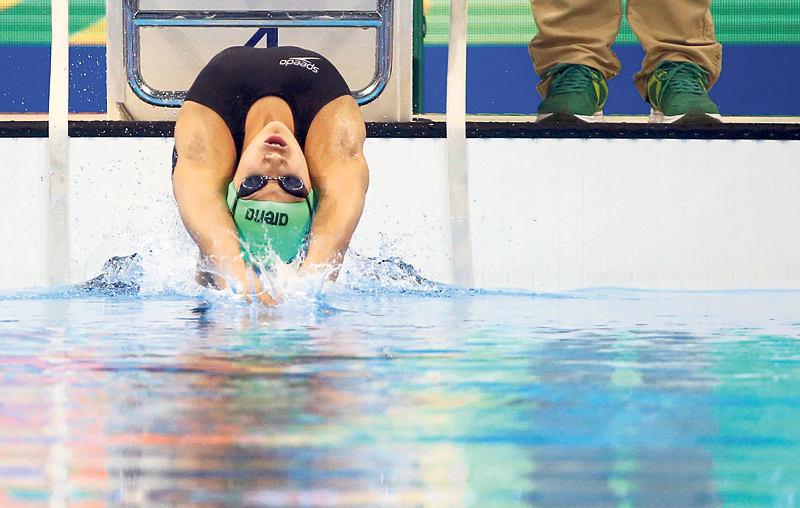 RIO DE JANEIRO, Aug 8: The youngest competitor at the Rio Olympics ripped her swimsuit minutes before her race on Sunday but still managed to beat her two rivals.

At 13 years and 255 days, Nepal’s Gaurika Singh is the youngest of more than 10,000 athletes taking part in the Games, so pre-race nerves were understandable.

To make things more stressful still, the London-based schoolgirl was unable to bring her regular coach, Rhys Gormley, to Rio, and had to confer with him by mobile phone on how to deal with the mishap.

‘’He’s been texting me and sending me instructions,’’ Singh explained to reporters during a round of interviews with the world’s press.

‘’Before my race I ripped my suit so I had to ask him whether or not I should change it. I was trying to pull it up and my nail went through the suit.’’

After switching to a different costume, she finished first of three swimmers in her heat, though with no chance of progressing further against an elite field in the women’s 100 metres backstroke.‘’It was amazing just looking up on that board and seeing my time,’’ she said.

Singh came to England at the age of two but discovered after taking up swimming that she was fast enough to represent her native country.

Last year she was in the Nepalese capital Kathmandu, on the fifth floor of a building, and was forced to shelter under a table when the Himalayan country was hit by a 7.8-magnitude earthquake that killed 9,000 people.

‘’I felt so grateful that I was able to survive that terrible earthquake. Just to be here and try and make my country proud is amazing,’’ she said.

Demand for resignation of CAN executive committee
3 hours ago
Two injured as a man tries to self-immolate in Pokhara, woman's condition critical
4 hours ago