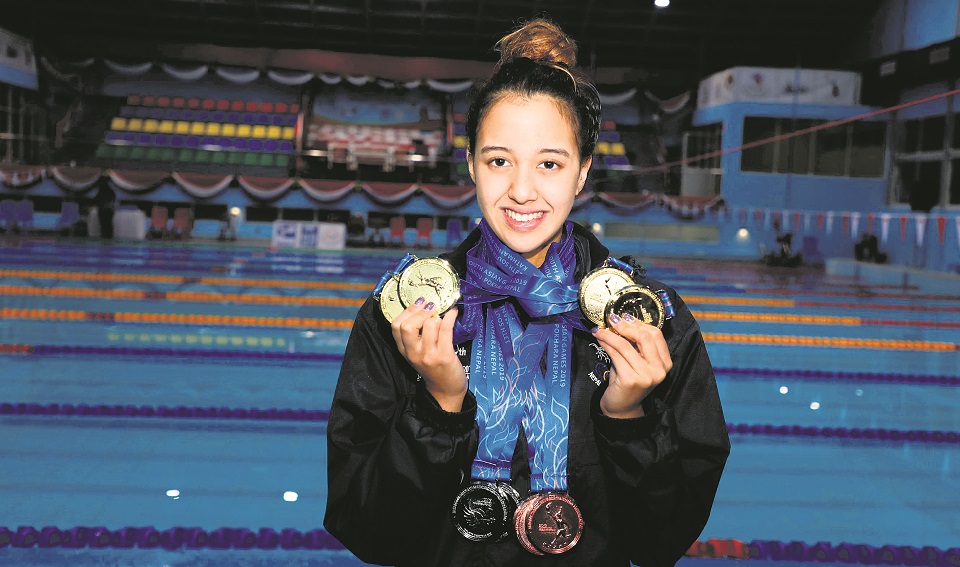 Gaurika Singh poses with her gold medals at the end of the women’s 100 meters freestyle event of the swimming competition during the 13th South Asian Games at the Satdobato Swimming Complex in Satdobato, Lalitpur on Monday. Photo: NSC

With this, she has become the only Nepali athlete to win four golds in a single Games. Only taekwondo’s Deepak Bista has won four SAG golds, but no athlete had achieved the feat in a single tournament.

Singh won her fourth gold medal in the women’s 100 meters freestyle event with a brilliant timing of 53.13 seconds, defeating her closest competitor of India’s Shivangi Sarma, who clocked 58.15 to win the silver.

In the category, the Nepali team timed 4:33.62 minutes to win the bronze, finishing behind India and Sri Lanka respectively. India won the gold clocking 4:21.28 minutes, while Sri Lanka covered the distance in 4:24.66.

Likewise, Shakya won the bronze medal with a timing of 2:33.01 minutes in the women’s 200 meters individual medley. In the category, India’s Richa Mishra won the gold clocking 2:25.11 minutes, while Pakistan’s Bisma Khan finished second completed the distance in 2:32.50.

India won a total of 27 golds, with the heavyweight team winning 19 silvers and six bronzes taking its total swimming gold tally to 52. Likewise, Sri Lanka finished on second with a total of 36 medals, seven golds, 11 silvers and 18 bronzes. Likewise, Nepal was third with four golds, four silvers and four bronzes. Bangladesh and Pakistan were goldless.

In men’s 200 meters individual medley, Sri Lanka claimed the gold medal with a timing of 2:01.66 minutes, while India duo Sridhar Suva and Srihari Nataraj clocked 2:02.42 and 2:09.49 minutes to claim the silver and the bronze respectively.

In men’s 50 meters butterfly, Sri Lankan duo Abeysinghe and Peiris won the gold and the bronze timing 24.00 and 24.51 respectively. Similarly, India’s Virdhawal Vikram Khade won the silver covering the distance in 24.02, while Nepal’s finished at the bottom clocking 26.56.