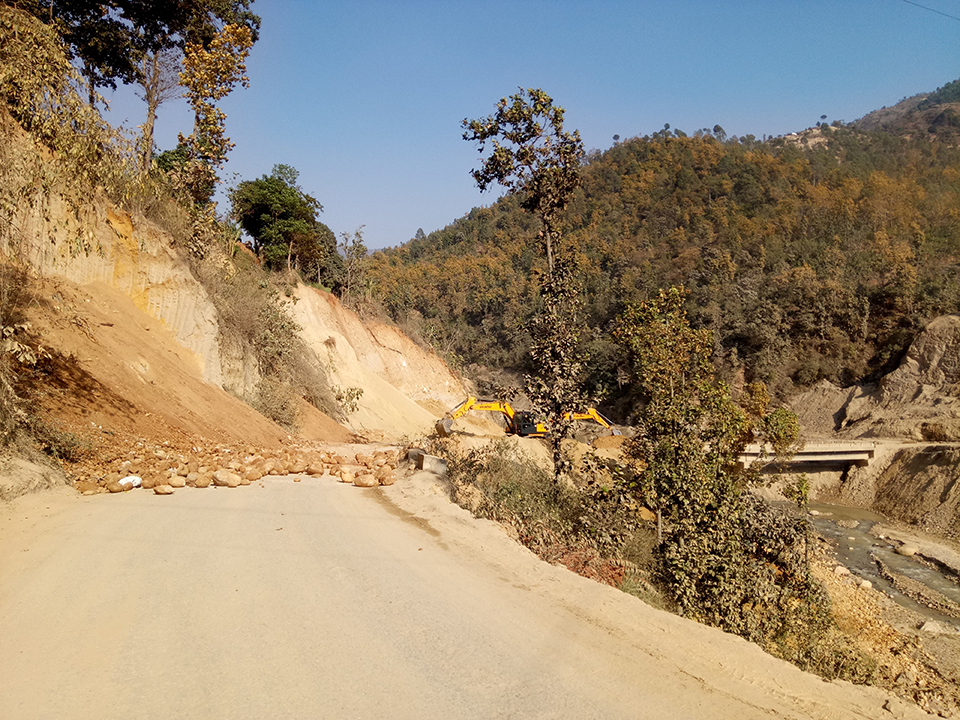 The project of high priority to miss yet another deadline

DHADING/RASUWA, June 13: The Galchi-Trishuli-Mailung-Rasuwagadhi road project, a national priority project, is set to miss yet another deadline of completion as its works are moving at a snail's pace.

Disputes on acquiring land and delay in shifting electricity poles have been claimed to be the key reasons behind the project delay. The project is set to miss the second extended deadline of mid-July 2019.

The road, when completed, will shorten the distance between Kathmandu and the Chinese border by at least 25 kilometers. Due to the shortened transportation time and relief from the existing winding road, cost of trading with China is expected to go down reasonably when the road comes into operation.

The work along a stretch of 46 kilometers out of the total 82 kilometers is undergoing at different sections, but extremely slowly.

The project contract was awarded in October 2016 with a deadline of 21 months to complete the construction work. Later, a six-month extension was given to the contractor with a new deadline of mid-March 2019. The deadline was extended for the second time by five months. Less than a month remains before the latest deadline ends.

"The project is sure to miss the new deadline," said Narayan Dutta Bhandari, project manager, adding that they had no other choice than to extend the deadline of the contract.

The work of blacktopping has started in few stretches but the delay in paying compensation to the affected households has affected the work, according to Bhandari.

The total project cost is Rs 9.5 billion. The road not only makes a trade link with China's Tibet but also serves as a crucial section of the road network connecting India and china.

About 45 percent of the work along Galchhi-Mailung section has completed, according to project officials. They cite different hurdles behind the delay.

Likewise, the work between Mailung and Syaphrubeshi, which is 18 kilometers long, is still uncertain. The track of the section was opened by Nepal Army, but the construction contract is yet to be awarded. The project has proposed building a tunnel, which has extended the road by one kilometer, to skip traveling under a cliff prone to landslide.

The project was started with a high national priority when the country was facing Indian blockade. The strategic connection the road would provide with China's Tibet was expected to promote trade diversity and reduce dependence on India. But after the end of Indian blockade, the road project seems to be out of the government's priority.

Meanwhile, a total of 400,595 houses damaged in the 2015 earthquake have been rebuilt, while another 228,885 are under construction. Accordingly, 52 percent of the reconstruction has been completed and 30 percent is under-completion. Sharing this information at the meeting of the National Assembly Sustainable Development and Good Governance Committee today, Chief Executive Officer of National Reconstruction Authority Sushil Gyawali said 767,248 beneficiaries have signed the private home reconstruction agreement. Of them, 99 percent have taken the first installment of housing grant while 76 have taken the second and 57 the third installment. The government has been providing a total of Rs. 300,000 as housing grant in three installments.