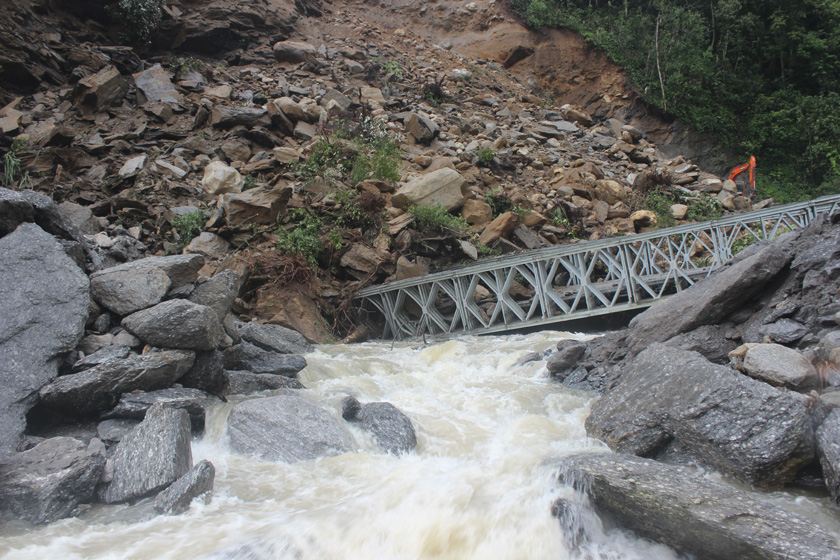 The site where huge mass of earth caved in on a tunnel of Arun III hydropower project on Friday.

SANKHUWASABHA, June 17: The four workers who were buried on Friday while digging a tunnel after a mould of earth caved in at Sankhuwasabha district have been rescued alive after 39 excruciating hours.

They were rescued from the incident site at Numko Fyakisanda tunnel site, Faksind, of the Arun III Hydropower Project, on Sunday morning at around 11 am. Locals and security personnel rescued them with the help of a dozer. The incident had taken place on Friday night at 8:40 pm.

Security personnel had started removing the debris of the landslides soon after it had occurred and buried the workers inside the tunnel. However, successive rains and landslides had hindered the progress of the rescue works. They had to blast explosives and create an alternative route to carry out the rescue mission.

After failing to make any breakthrough on Saturday, they were finally able to remove the landslides debris the next day. An excavator managed to remove debris of the landslides, enabling them to find trace of the tunnel. After that, they led the stranded survivors out of the tunnel by guiding them through ropes.

“Despite difficulties and hindrances, we sped up the rescue operation to the best of our abilities in hopes that we could rescue them alive,” said Deputy Superintendent of Police (DSP) Shyam Saru Magar, who is also the chief of the District Police Office (DPO), Sankhuwasabha.

According to him, health worker were kept standby at the incident site and necessary oxygen and medicines were kept ready. “After we penetrated the tunnel, to our great relief, we found all of them alive.”

The two Nepalis are being taken to the district hospital at Khadbari as they are in need of further treatment, informed Chief District Officer Ganesh Bahadur Adhikari.

Our hope grew as all four were together: Survivor

Given the stressful scenario, few media had announced the likelihood of not finding any survivors. Message of condolence also poured in on social media. However, the rescuers held on to their hopes and remained optimistic. They proved to be right.

“After the rescue, I felt like being born again,” said Budhan Munda, one of the victims, who was tasked with operating drilling machines to dig the tunnel. “As all four of us were together inside the tunnel, it increased our hope of survival. We tried to assure each other that we would be rescued and that assurance helped a lot.”

They had no food. Their survival was heavily reliant on water only.

After suffocating since being trapped inside, which seemed endless, they heard sound outside the tunnel, giving them hope of rescue. “We noticed they had dug a small hole. It let light in and also eased our breathing as we were suffocating inside,” added Munda.

According to the locals, insufficient measures have been adopted for the safety of workers. They say all they have for safety are the helmets on their heads. Locals blamed poor safety measures for the incident that almost killed the four workers.

Sailendra Guragain, chairman of Independent Power Producers' Association – Nepal, said that inadequate security measures in such a big project like Arun III is a matter of shame.

“Not only is it a big project, but also a bilateral one. Security measures for workers are clearly mentioned in the Project Development Agreement. The negligence that led to the incident is really sad,” he said.