Fire in Bhatbhateni put out after four hours 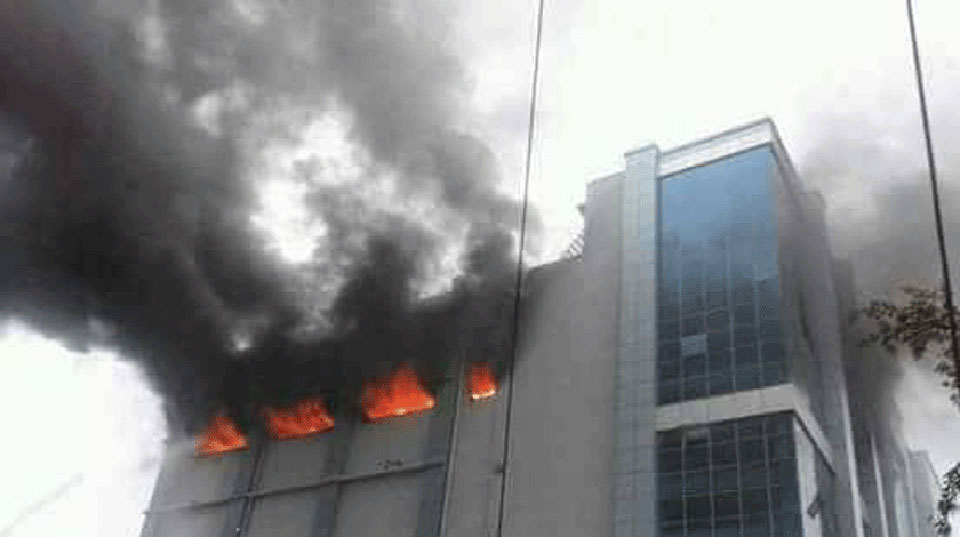 BUTWAL, April 8: The fire that broke out in the Bhatbhateni supermarket in ward no. 8 of Butwal Sub-metropolis has come under control after an effort of around four hours.

The fire began from the fifth floor of the supermarket building at around 3:00 this early morning and was put out with the help of fire tenders from the Sub-metropolis, Siddharthanagar, Ramgram, Kapilvastu and Tansen municipalities, according to DSP at the Area Police Office, Butwal Keshav Kumar Bhattarai. Nepali Army, Nepal Police and Armed Police Force persons were also mobilized in bringing the fire under control.

The damage incurred in the incident is not yet known. However, the electronic goods in the fourth and fifth floors of the building have been completely gutted. "As I am not in Butwal, it is hard to estimate the damage caused by the fire and also the reason behind the fire," Bhatbhateni supermarket proprietor Min Bahadur Gurung said over the phone.

The supermarket had come into operation last year with the investment of Rs. 950 million. It had been a commercial success within a short span of time.

Following the incident, Chief Minister of Province No. 5 Shanker Pokharel, Minister for Internal Affairs and Law Kul Prasad KC, Mayor of Butwal Shiva Raj Subedi and deputy Mayor Gomadevi Acharya and other officials had reached the supermarket premises to take stock of the situation. RSS

United Airlines under fire after passenger dragged from plane; officer put on leave

NEW YORK,April 11: United Airlines (UAL.N) sparked outrage on Monday for the treatment of a passenger who was physically dragged off... Read More...

Narayangadh-Muglin road to disrupt for four hours from today

CHITWAN, Dec 22: The Narayangadh-Muglin road section will be disrupted four hours a day from today due to ongoing construction... Read More...

No one should die in search of hospitals, says lawmaker Lingden
17 hours ago