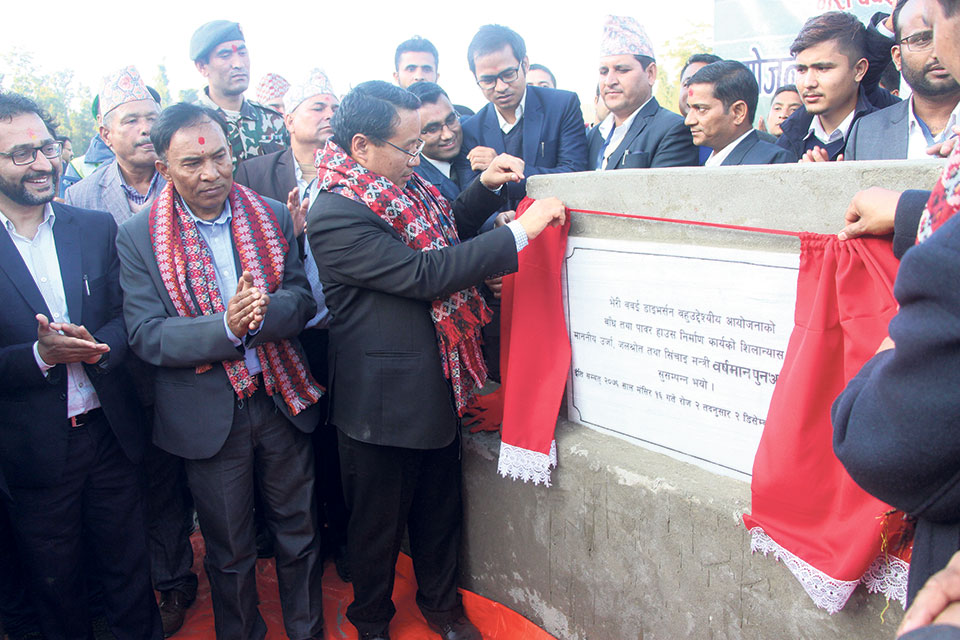 SURKHET, Dec 4: After seven months of construction of a tunnel, Bheri-Babai Diversion Multipurpose Project has finally laid the foundation stone for construction of the dam and the powerhouse of a hydropower project to be built under second package of the national pride project.

Minister for Energy, Water Resources and Irrigation Barshaman Pun laid the foundation at Chiple of Bheriganga Municipality on Monday. The Department of Irrigation awarded the contract for construction of the dam and the powerhouse to Raman-Guangdon JV. The contract agreement was signed on August 1.

The project aims at diverting the waters of Bheri River to Babai River for irrigation purpose through a 12.2-kilometer tunnel. Tunnel digging work has already been completed by using a tunnel boring machine (TBM). China Overseas Engineering Group (COVEC) had completed the tunnel one year before the scheduled date.

Speaking at the event, Pun said support and cooperation from every concerned stakeholder was needed to complete the national-pride project on time. He also assured that the project would provide different benefits to project-affected locals.

Speaking at the event, Sanjiv Baral, chief of Bheri-Babai Diversion Multipurpose Project, said hydromechanical and electromechanical work of the hydropower project will start soon to ensure that the project is completed within the stipulated timeframe.

According to Baral, a 15-meter dam having six barrages will be built at Chiple. The project is expected to be completed within 2023. It is estimated to cost Rs 33.19 billion. It is expected to give returns of Rs 3.1 billion from increased agricultural yields and Rs 4 billion from hydropower annually.

Submitting a memorandum to Pun, representatives of Gurvakot, Lekbeshi and Bheriganga municipalities said the project most honor past commitments made to the people of the affected areas.

"The project area has been downsized. There is a need to resurvey the area and revisit compensation rate to be provided to the locals," Bhupendra Chand, the mayor of Bheriganga Municipality, told the minister.

Similarly, Hasta Pun, the mayor of Gurvakot Municipality, said that the federal government should implement the project by giving ownership to locals of the affected areas.

How hydro companies are cheating shareholders

KATHMANDU, June 24: Minister for Energy, Water Resources and Irrigation Barsha Man Pun has clarified that the government has not... Read More...

MYAGDI, Nov. 28: The construction works of Ghalemdikhola Hydropower Project have progressed around 90 percent of the total physical infrastructure.... Read More...