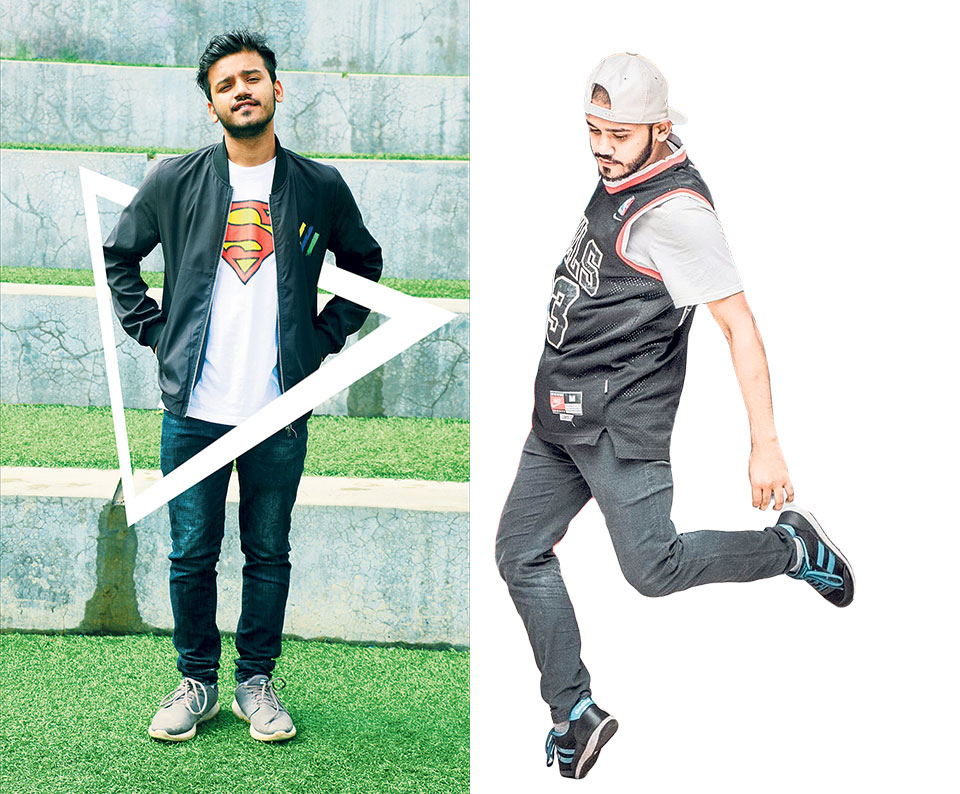 Mukesh Dhakal is your typical college boy. He goes to college, has a great time with his friends, studies when he has to, and sleeps whenever he can. Nothing about him will strike you as extraordinary at first glance. But when you see him on stage, all notions of regularity you associated with him will be washed off before he steps off it. For there is nothing ordinary in the way he moves his body, and the way rhythm and music seem to course through him.

Mukesh started dancing about five years ago, just after his class 10 exams. He loved dancing, loved the precision with which his body moved and the liberation he felt when submitting to the music. Music became him and he a manifestation of all that laid buried in him. But everything he learnt was limited to only what he learnt through videos on YouTube.

He wished to learn professionally but there were hardly any qualified teachers he could train under. And like many dancers of this age he did what has now become the norm, he made YouTube his teacher. And it was here that he learnt popping, a form of dance that is based on the technique of contracting and relaxing muscles to cause a jerk in the dancer’s body in great quickness. Popping, incidentally, has steadily been gaining popularity among the Nepali crowd these days.

Although Mukesh has done dancing stints as a solo artist, his most notable work has been his involvement with the dance group “Mongolian Namja.” The group is comprised of former solo artists who, as a team, were the first Nepali dance group to represent Nepal in the Kpop World Festival (KW) in the year 2016. The group has since disbanded but, with reorganization and inclusion of more members, they are better than they have ever been and are making waves in the underground dance scene.

The group participates in dance battles that see various dance groups of the nation competing for the spotlight and recognition they have yet to receive.

Dance battles were quite the norm early on in Nepal, when the dance scene in the country was in its early infancy. However, the battles got scant recognition from the public and was limited to only the dancing circle. This has changed in recent years.

The dance battles take place on saturdays and various groups of dancers with all kinds of dance styles – locking, breaking, popping and b-boying – flock the venues in the heat of midday and face off against one another. An audience comprising of dance enthusiasts and general spectators crowd around the dancers as each dance group takes solo turns at a face off.

These events are usually heavily influenced by the hip-hop genre. An emcee, a panel of judges, a DJ and dancers make up the event. The dancers are kept in the blind regarding the beat they will be performing to and as the music croons from the speakers, the groups dance freestyle. The judges evaluate the performances and accordingly groups progress to further rounds.

The dance group that clears the finals is awarded a cash prize. But Mukesh says that the cash prize barely covers the expenses incurred by the dancers during preparation. “The financial rewards are limited. Even though dancers never dance with the intent of earning, it’s hard to keep going with what we earn,” he says. Nepali investors are reluctant to sponsor winners or events and, in cases such as these, even the winners get the shorter end of the stick.

“It’s demoralizing, knowing that dancing in Nepal is so wholly ignored, when in fact it is so rooted in our culture,” says Mukesh. Adding on to that he elaborates that most dancers are frustrated by the lack of platform. “Dancers are no less than the artists in the west. We too deserve the very best of stages and the dance battles we participate in make an attempt at giving us opportunities,” he adds.

A few years back the dancing scene was dominated by b-boying. However, that’s no longer the case as more up and coming dancers are taking over and popularizing other genres of dance as well.

In Nepal the dance industry is mainly divided into two levels, the underground and mainstream. While mainstream dance has somewhat of a following and recognition among the general public, what with commercial dance numbers garnering millions of views on YouTube, the underground scene has yet to catch up. Freestyling isn’t a people’s favorite but many dancers, such as Mukesh himself, hope that the day will soon come when the underground scene too will get to be on the forefront.

“I hope for the dancing community to unite among themselves. This is an age of change and if we stay divided and only among our own groups we will be left behind,” he explains. He hopes for Nepali people to open up to the prospect of dancing as a career and view it in a favorable light.

“We need international hip hop instructors to guide and mentor us. We might have fallen behind if you see the international level but we know what we need to do in order to catch up and also have what it takes,” he says adding that dancing is the only love he has ever known and he’s never going to give up on it.

An artist on the rise

Sarana Shrestha is a 20-year-old artist based in Kathmandu. Unlike many artists who seem to have a knack for drawing... Read More...

The common belief is that to experience enlightenment one must sit motionless and be completely still. Dance seems antithetical to... Read More...

She has a degree in environmental law but you will also find her instructing zumba or piloxing classes at various... Read More...

Number of people dying of coronavirus in Nepal rises to eight
10 hours ago
Tax rise on electric vehicles will hit govt plan of making country self-reliant in energy use: Lawmakers
13 hours ago
Supreme Court orders govt to provide goods to needy for preventing COVID-19 pandemic
6 hours ago
Hong Kong to evacuate its 330 people stranded in Nepal on Monday: report
7 hours ago