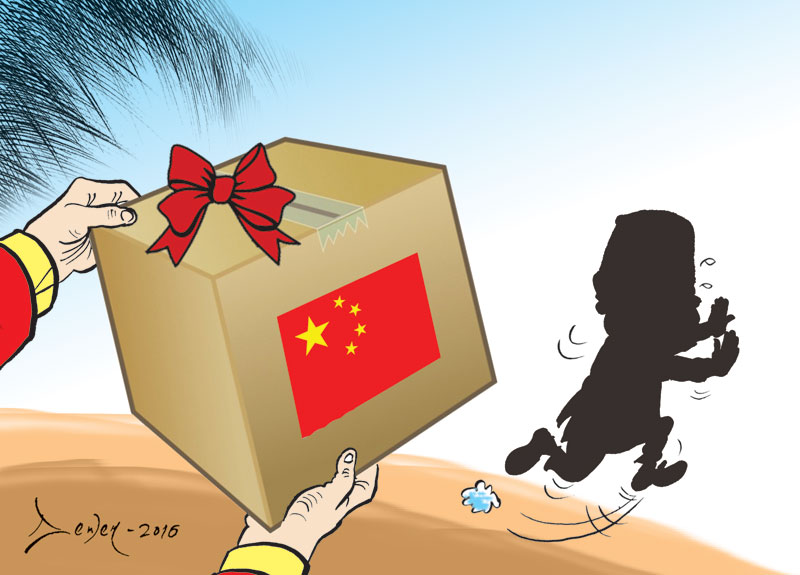 Dahal government hasn’t been able to handle the sensitivities of our northern neighbor with the seriousness the issue deserves
Chinese President Xi Jinping visited Bangladesh on his way to the BRICS-BIMSTEC Outreach Summit in Goa—the first Chinese head of the state to do so in past 30 years—in October of this year and signed agreements worth over US $20 billion. Bangladesh has been courting both India and China to come invest in its much-needed mega infrastructures like rail networks, ports and power plants. And then there was news from Goa two days later: the accidental meeting of Nepali PM Dahal, Indian PM Modi and Chinese President Xi on the sidelines of BRICS-BIMSTEC summit. There were plenty of platitudes: that India and China want to support Nepal in its developmental aspirations and that Nepal should not think itself as a small nation and so on and so forth. However, a number of recent missteps by our top leaders have thrown Nepal-China relations off-kilter of late.

While PM Dahal was busy celebrating the Goa meeting as “historic,” Bangladesh looked forward to using billions of pledged aid from China to meet its infrastructure needs. A few weeks after the Goa meeting, PM Dahal told a group of editors at Baluwatar that it was unlikely that Chinese President Xi will be visiting Nepal anytime soon. No one is bothered about the lost billions of dollars of Chinese investment in Nepal had President Xi visited Kathmandu, either before or after the Goa summit.

Then a month later, Nepali Congress president Sher Bahadur Deuba was in the news for sharing a stage with Lobsang Sangay, Tibetan PM-in-exile, again in Goa. He was in complete denial until the photos surfaced. To make things worse, Foreign Minister Prakash Sharan Mahat said the images were photo-shopped. To dismiss such a blunder by Deuba so lightly is refusing to understand China’s sensitivities on Tibet.

Fast forward to December 2016. Liu Qibao, a powerful member of the Political Bureau of the Communist Party of China (CPC), wrapped up his three-day official visit to Nepal last week without meeting former prime ministers Deuba and KP Sharma Oli. It is understood that Deuba’s (mis)adventure in Goa played a role in cancellation of the planned meeting with Liu in Kathmandu, just an hour after Liu met PM Dahal for 45 minutes. Foreign policy experts in Kathmandu say that Liu has conveyed his government’s displeasure with recent adventures of Nepali leaders that had made China somewhat suspicious.

The Dahal government hasn’t been able to handle the sensitivities of our northern neighbor with the seriousness the issue deserves. The cabinet decided to grant a public holiday during the state visit of Indian President Pranab Mukherjee. But it also decided to do the same (in advance) if and when Chinese president also visits Nepal. The Chinese government was not happy with the decision.

When the dates for President Xi Jinping’s visit were yet to be finalized, the move was a sign of Dahal government’s insecurity and immaturity in dealing with our two powerful neighbors.

Last week, during Liu’s visit, Nepal also welcomed Tsend Munkh-Orgil, the Mongolian Minister for Foreign Affairs. The visit of the Mongolian Minister coinciding with that of Liu is not accidental. China imposed blockade on Mongolia last week after a six-day visit of Dalai Lama to the country. Of other things, Foreign Minister Orgil was in Kathmandu to gather support from Nepal to resolve the blockade. China said Dalai Lama’s visit hampered the core interest of China. Munkh-Orgil, in an effort to reconcile with China, had to publicly apologize and vow to never allow Dalai Lama in Mongolia even for religious purpose.

Today’s China is straightforward and confident. China has taken serious reservations with some moves of Donald Trump, the president-elect of the United States. Trump’s phone call with Taiwanese president and the appointment of China trade critic as his trade czar has Beijing warning against any use of “One China” policy as a bargaining chip. Beijing has stated in absolute terms that “One China” is non-negotiable.

According to Hari Sharma, an advisor to former president Ram Baran Yadav, if we analyze Nepal’s voting behavior at the United Nations, we either vote with China or India. China today is about more than rhetoric. Sharma believes powers like China think there should be automatic compliance from its neighbors. Dahal, Deuba and a host of other leaders in Kathmandu either fail to understand the nuances of China’s global might or are willfully ignorant of the regional balance of power.

China’s role in Asia and the world continues to grow. We will see more active and engaged China in international forums. While we continuously struggle to balance India and China, recent moves by the government and former PM Deuba have put our relations with China in jeopardy, with as yet unimaginable consequences.

Rajan Bhattarai, a member of the Eminent Persons’ Group (EPG) and UML lawmaker, sees the timing of Mongolia’s Foreign Minister’s visit as a blunder. He questions the current government’s motive in inviting Mongolia’s top diplomat at a time the Chinese delegation was visiting. Deuba’s attempt to normalize the ‘Goa incident’ is troubling and that its ramification is deeper than it appears. Liu’s ‘illness’ just before he was to meet Deuba should alarm everyone in Nepal.

In a recent visit to China’s fortune 500 companies, I found that many are eager to invest in Nepal. However, they fear Nepal’s political volatility and opaque governance. We are ignoring active interest of global companies that want to invest in Nepal. Nor do our leaders seem interested in improving business climate in Nepal. Yet we are ready to jeopardize our long-term relations with China.

If Bangladesh can maintain healthy and productive relations with both India and China, why can’t we? Why is it that our leadership never tries to bring investment from willing partners like China? Our geographical reality forces us to be sensitive to concerns of both India and China. Unlike bigger powers, we do not have the luxury of flirting with the ideas that are contrary to our neighbors’ concerns, be it on Tibet or Kashmir. Sadly, our time-honored tradition of working with the two giant neighbors for Nepal’s greater interest seems to have been put on the back-burner, at least for now.

Mukesh Dhakal is your typical college boy. He goes to college, has a great time with his friends, studies when... Read More...

Leader Khanal slams govt for dancing to the tune of foreigners