For or against child marriage? Green flag tells it all in Baitadi 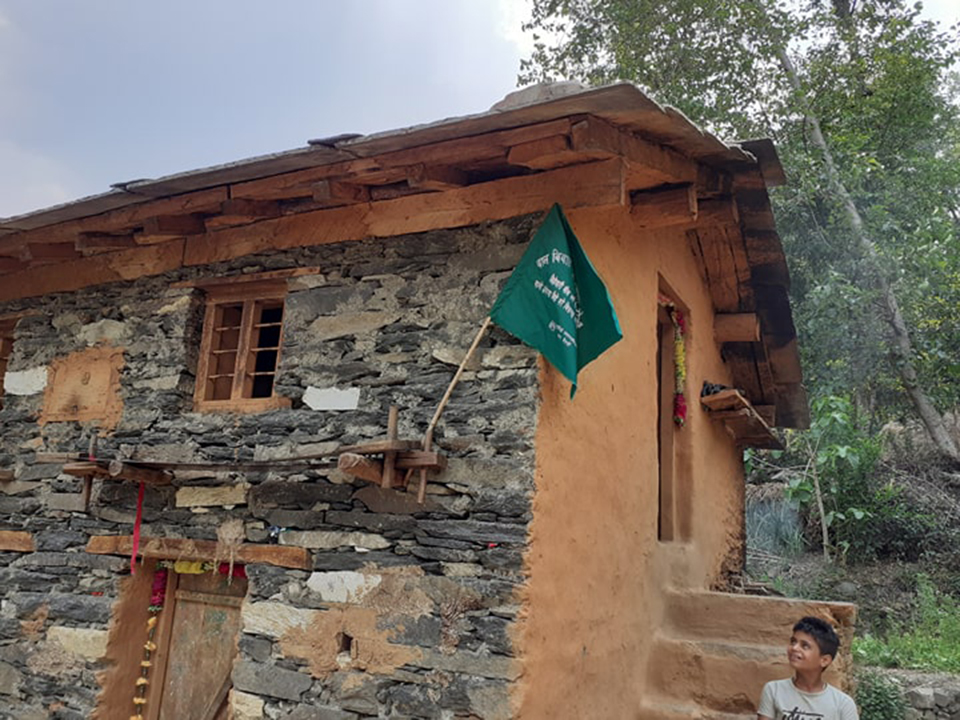 A green flag kept at the house Sunita Bhatta of Purchaudi Municipality-4.

Baitadi is among the five districts of the country where child marriage is widely prevalent. A survey conducted by a national network called 'Balika Dulahi hoinan' showed that 59.4 girls in Baitadi tied the knot before reaching the age of 17.

BAITADI, May 13: In a bid to curb child marriage, Purchaudi Municipality of Baitadi has started a campaign to keep green flags at the homes of all girls who are below 20 years in the local unit.

Altogether 1,000 houses in all 10 wards of the local unit have been provided with such flags. The flag has various messages written in it like child marriage is a crime and no girl should be married before 20. According to the municipality, the green flags will serve as a reminder to the parents and others that their daughters are still not eligible for marriage.

The municipality has launched this program to stop child marriage. The municipality believes that stopping child marriage will reduce the number of divorce cases, and also avoid reproductive health problems and mental pressure among young girls. Not just that, the municipality is also conducting various awareness programs for abolishing this ill practice, according to Sarita Awasthi, chief of the Women and Children Department of Purchaudi Municipality.

A group of girls have been formed in each ward to spread awareness against child marriage. Janaki Bam, deputy mayor of the municipality, informed Republic that these girls will be provided a three-day training in the beginning. Activists argue that it is not possible to curb child marriage until the parents and girls themselves don't stand against it.

Still a large number of people are unaware about the punishment that they may be subjected to for practicing and promoting child marriage. Ganesh Bahadur Gadal, chief of ward no 1, stated that this program will not be effective unless such flags are hoisted at all households of the local unit.

“The municipality has provided only 100 flags to our ward,” said Gadal, adding, “It would have been effective if we had flags for all the houses.” Apart from informing the people about the legal provisions, the municipality will also be making villagers aware about the consequences of child marriage.

The municipality had earlier provided training and awareness to shamans and priests hoping that they would play a pivotal role in minimizing cases of child marriage. Baitadi is among the five districts of the country where child marriage is widely prevalent. A survey conducted by a national network called 'Balika Dulahi hoinan' showed that 59.4 girls in Baitadi tied the knot before reaching the age of 17.

KATHMANDU, April 13: The Ministry of Education, Science and Technology has directed all local levels for making the school enrollment... Read More...