Food you will love

Given the growing fascination of the Korean culture among Nepalis it’s no surprise that Korean restaurants these days get a lot of visitors. If the aisles of supermarket stores packed with ramen and other instant Korean snacks are any indication, Korean food is the new ‘it’. Hangkook Sarang in Naxal, Kathmandu, is catering to this Korean food loving crowd and how

A short walk from Bhatbhateni in Naxal, Hangkook Sarang is tucked in a quiet alley away from the dust and the noise of the main streets.With its curved arches for rooftops, wood paneled interiors, and wooden frames on the wall, the restaurant itself is made to resemble a traditional Korean monastery. At the center is a working wooden wheel, modeled in the likeness of the standard water pumps in ancient Korea. The build is to emulate a typical Korean building and it is achieved with some remarkable success.

Chijman Gurung is the man behind the conceptualization of the restaurant. Gurung went to South Korea decades ago for foreign employment and fell in love with the country’s culture and especially the food. “What fascinated me was the balance in Korean food. They are quite the drinkers but they accompany their drinks with fresh greens, pickled radishes and other such natural digestives,” he explains. He believes that eating in this manner is so rooted in the Korean culture that the people themselves never realize the balance in their food.

Korean food also strongly makes use of spice so Gurung could see a possibility for Korean food in Nepal. So he opened the first Hangkook Sarang in Pokhara nearly a decade ago. Since then he has launched a chain in Biratnagar and Thamel, among other parts of Nepal. But the one in Naxal is separate and exists independently.

Hangkook Sarang directly translates to “one country love” and Gurung only hopes that his customers come to love the food as much as he does himself. The logo to Hangkook Sarang (designed by Gurung’s wife) is a reference to food culture, Buddhism and his perceived vision to unite people through good food.

The layout is designed to offer a choice for seating arrangements. From glass panels to outdoor seating arrangements and interiors completely done in wood, the feel is robust. Rather than fluorescent lights, the focus is on natural lighting and the first light isn’t lit until the sun sets. Each table is equipped with a center grill pan/stove that can be used to grill meat or heat broth. The menu too is similar to that of a typical restaurant and this, Gurung explains is so that Nepali people first develop a taste for Korean food. “There are some dishes that may be too strange for our palates so we’re going slow. We also have a new menu in the works where we’ve added a few specials,” he says.

Gurung himself leads the team in the kitchen. “None of our staffs are trained cooks but they learn from experience. Often he takes his staff to the restaurants run by native Koreans to develop a feel for the food. The side dishes change daily with the singular exception of yangbaechu kimchi (a staple for any kind of Korean food). From radish kimchi to grilled spinach, seasoned fried tofu, the sides are somehow little feasts on their own. The bar menu boasts a range of drinks. They have soju too, if one wishes to try that.

With a good ambience and soul food that it promises, Hangook Sarang is definitely a great stop for either a heavy lunch or dinner.

Although not a part of the official menu, this smoothie can be specially requested for. The smoothie is essentially a blend of mashed avocados, honey, yoghurt and some milk. It’s a refreshing drink, one that feels dense, cool, and slightly sweet. The lightness and the frothiness of the drink is a welcome intrusion especially when you are washing down the spices and grease of Korean food. All in all, it’s a good drink to go along with your heavy lunch.

Named after thinly sliced boiled pork belly on a traditional hotpot, this Shabu Shabu salad is a great way of getting some greens into your system with some meat. The salad consists of large leaves of iceberg lettuce, carrots, chopped red and yellow bell peppers and some onions. The dressing is homemade sesame based shabu shabu. This gives the salad a slightly sweet, slightly tart taste. The chewiness of the pork belly, the crunch of the veggies, and the tang of the dressing all make the Shabu Shabu salad a dish you can’t go wrong with.

Ramen and tteokbokki are two of Korea’s most popular street snack. So rather than serving them individually, Hangkook Sarang chooses to serve the two as a single dish. “Tteok” is the rice cake that makes for the main ingredient of the dish and it’s very hard to dislike. It is chewy (milk chocolate chewy) and has an understated sweetness to it. Then there’s the sauce: equal measures of spice and sweet. The thick sauce coats the rice cakes and ramen noodles, it’s sticky and hot. Do finish the noodles while they are still warm.

You can choose if you want your maeuntang soup with catfish or trout, we went with the catfish. Maeuntang is what can be called soul food, the fish and soup is akin to the fish curries we make at home, so the flavors hit on all the familiar spots. The soup is runny and is both hot and spicy.You also get some large chunks of dropwort and radish, both of which have been soaked in the broth. It’s best to share this with four people. Take some rice with your broth and eat it with the tender fish. You will definitely be reminded of home. 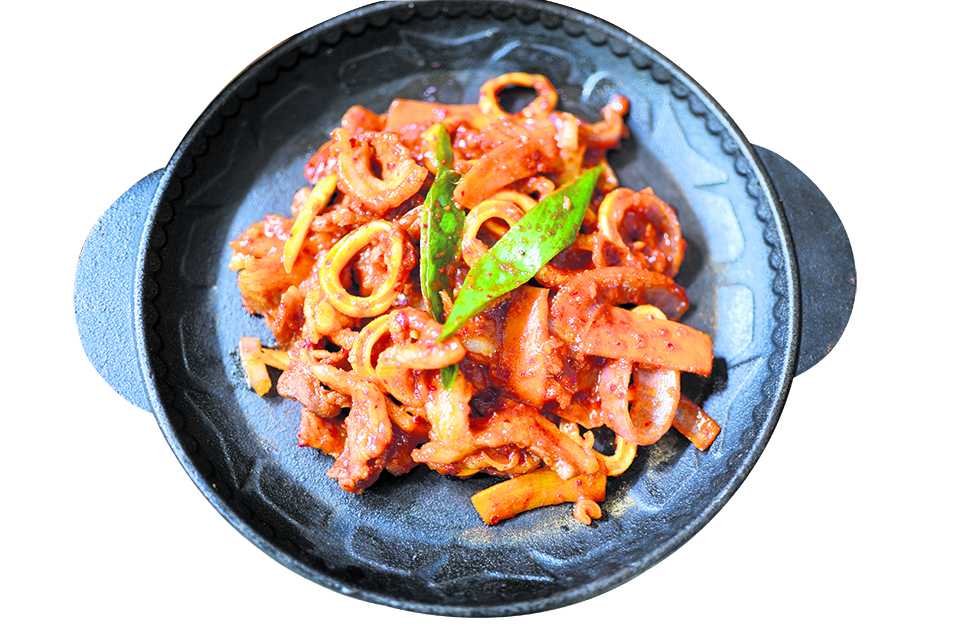 Oshan is Hangkook Sarang’s own unique creation: Fried squid and samgyeopsal with a thick sauce that has the zing of umami and is spicy. The sauce is also strongly sweet, but not in the sense that it takes over the entire flavor of the dish. This works well because Oshan is a dish most favored with some strong alcoholic drinks, traditionally soju. The squid itself has a rubbery texture but it’s the good kind of rubbery and it doesn’t necessarily soak in the sauce. Samgyeopsal is pork belly with three layers of meat and it is this nicely grilled samgyeopsal that soaks in the sauce. You’ll be sorry when this dish finishes. And, if at the end, you have some of the sauce remaining, you can ask for some more rice and make your own fried rice.

A little suggestion before trying Gamjatang, if you’re not one for putting too many ingredients in a single dish, maybe pass on ordering Gamjatang. Gamjatang is served over the flame and is typically shared among three to four people. The soup is boiled with pork neck bones, boiled potatoes, some onions and perilla leaves. These ingredients make the broth thick and meaty. The taste almost clings to your tongue. The broth goes well with a bowl of rice (that comes with the dish) and some side dishes. Stuck to the crevices of the bone are bits of pork neck meat that is both succulent and tender. The people of Korea consider gamjatang to be a hangover soup and with the heavy flavors we could definitely see why.

KATHMANDU, Nov 25: There is no doubt that Nepalis are highly influenced by Indian food and culture. There are a... Read More...

The Embassy of the Republic of Korea saw the opening ceremony of Korean Culture Week on Friday at Heritage Garden.... Read More...

A traitor like Madhav Nepal has no space in the party: UML Chairman Oli
17 hours ago
Only 16 percent of construction of Kathmandu-Terai expressway completed in past four years
16 hours ago

Study: Vaccinated people can carry as much virus as others
1 hour ago