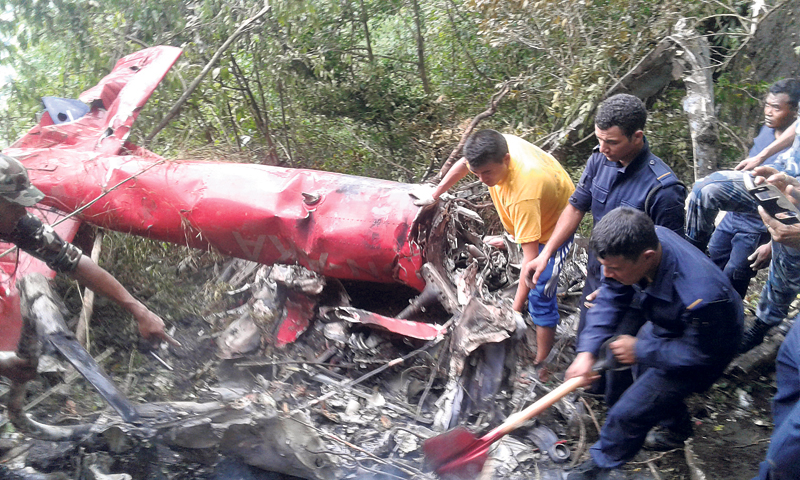 Police and army personnel carrying out salvage work at the site of the Fishtail Air helicopter crash at Betini in Belkot VDC of Nuwakot on Monday afternoon. (Nirajan Paudel/Republica)

NUWAKOT, Aug 8: A helicopter belonging to Fishtail Air crashed at Betini, Belkot VDC-8 of Nuwakot district on Monday, killing all seven on board, including the pilot and a new-born baby.

The ill-fated chopper, call sign 9N AKA, was bound for Kathmandu from Sirdibas VDC in Gorkha district, carrying a 19-year-old woman facing medical complications after childbirth, and her five-day-old baby.

The woman's father-in-law Kitman Gurung, 65 and his wife Agyani Gurung, 56 were also in the chopper.

Similarly, Laxmi Gurung of the same village and health worker Nisha Tamanag of Itahari, Sunsari district, who were accompanying the sick party, perished in the incident.

Two teams of security personnel - one from District Police Office, Nuwakot and the other from the Armed Police Force Training Center at Kakani - have been deployed to the incident site.

"Priti was very sick even prior to her delivery. She had high fever and a terrible cough and cold. After giving birth, there was bleeding which didn't stop," said Sujan Gurung, a relative.

"We took her to a local health post where she stayed for three days. As there was no sign of improvement, we decided to charter a helicopter and take her to Kathmandu," he added.

The family had to take out a loan of Rs 120,000 for chartering the helicopter.

Weather conditions are  suspected to  be the reason for the fatal crash.

Bad weather is suspected to be the main cause of the Fistail Air helicopter crash on Monday.

The chopper was flying at an altitude of 6,700 feet at the time of the crash, according to Bikash Rana, chairperson of Fistail Air and himself an experienced helicopter pilot.

Details of the accident will emerge once the investigations are complete, Rana added.

[Keshab Thoker/Republica]
In the pictures, above, bodies of Nuwakot helicopter crash victims arrive at the Tribhuvan International Airport on Monday evening. The bodies were sent to TU Teaching Hospital for post mortem. The picture below, shows relatives of the chopper crash victims wailing in grief as the bodies arrive at Tribhuvan International Airport Monday afternoon.

KATHMANDU, Sept 14: The phone rang. The receiver was greeted with a frantic message from the other end. “Call your... Read More...

DHADING/ NUWAKOT, Sept 9: Six people died while one was injured after an Altitude Air helicopter crashed into the dense forest of... Read More...

Universities should focus on producing manpower that can compete internationally: Prime Minister
48 minutes ago