Fines not a deterrent to road accidents 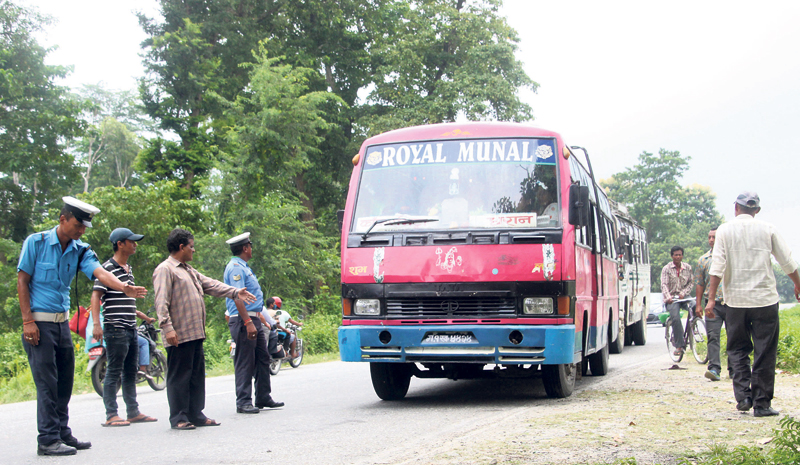 Traffic police personnel and transport operators checking vehicles and alerting the drivers to traffic discipline at Panipiya section of Dharan-Itahari section of the Koshi Highway on Friday. Rohit Rai/Republica

Superintendent of Police (SP) Giri said that charging fines to arrogant drivers has not helped since 'many carry fake license while some others are seen driving without any license and have no sense of responsibility '. SP Giri cites a number of loopholes in transport safety mechanism and says expecting better road safety without addressing those underlying issues is impractical.

Road accidents in Jhapa have become a common occurrence. There were 198 accidents in the last fiscal year. Hundreds of people were injured and 79 lost their lives in the accidents.

While the number casualties is high among two-wheeler riders, police report indicates that they died due to the undisciplined driving of others rather than due to their own mistakes.

“Drivers of heavy vehicles, who are too desperate to overtake others, have killed many people,” said Dhundaraj Adhikari, Traffic Police Chief of Jhapa. He admitted that the fine slapped on drivers has not really served the purpose.

After they pay the amount to the traffic police and get a 'chit', drivers seem even more at ease to drive as they please, according to passengers. Passengers in Jhapa urged for ending the practice of reckless driving of public vehicles at any cost.

“Drivers are not disciplined. They have zero knowledge of the rules and regulations and charging them fine is certainly not making any difference. Rather they pay fine and feel as if they have been freed,” said SP Giri.

In the last fiscal year, Jhapa police took action against 42,260 drivers in the district alone.

They were fined for driving without license, not carrying necessary documents, consuming alcohol while driving and so on. However, police records show few cases of drivers being booked for overtaking, carrying overloaded passengers and driving in excessive speed.
According to Giri, road accidents are more common in hilly roads mainly because of 'haphazard distribution of license'.

“Everyone is getting license. They call themselves drivers, but have no idea of driving,” Giri said. “Then, aren't accidents natural?” Giri asked.

Rule breakers are fined. They are charged again and again if they break rules repeatedly. Rather than taking action against them, the wrongdoers are allowed to walk free after paying fine, said a traffic police in Jhapa. He added that such trend only increases accidents. “And when they are allowed to go after paying fine, they do not feel the need to listen to anything we say either,” he added.

In the last fiscal year, Jhapa district contributed Rs 17.6 million in revenue through fines collected from traffic rules violators. “But until and unless the traffic police sets its priority, road accidents are not going to be minimized,” said Buddhinath Ghimire, who is associated with driving line since the last 40 years. “Or else, pay fine, and break rule; that's what the government wants,” he added.

Age not a deterrent for elderly voters