Iceland and Croatia face off in Rostov-on-Don as Group D of the 2018 FIFA World Cup Russia reaches an exciting conclusion.

The Croatians made the best possible start to their campaign with victory over Nigeria and a particularly impressive win over Argentina. With their place in the Round of 16 now secure, they have the incentive of trying to emulate the nation's magical run at France 1998. Before they set about that task, they can have a say in who joins them in the next round. Should they beat or draw with the Icelanders, they will send them home.

Even a win may not be enough for Iceland, as they will need to keep an eye on Argentina’s meeting with Nigeria in Saint Petersburg. If Nigeria win, Iceland will go out. If Argentina draw or win, it will all come down to goal difference.

Heimir Hallgrimsson’s men have one happy memory of past meetings with Croatia: the 1-0 win in the qualifiers for Russia 2018. Three of their players will also feel right at home: Sverrir Ingason, Ragnar Sigurdsson and Bjorn Sigurdarson all play for Rostov.

Team reporter analysis
Iceland have a habit of bouncing back from defeats such as the one they suffered against Nigeria. After employing a 4-4-2 formation against the African side, they look likely to revert to the 4-5-1 used against Argentina and in that victory over the Croatians a little over a year ago. Emil Hallfredsson starred in that match and is expected to return to the starting XI along with Johann Gudmundsson, who is close to being fully fit again. - Petur Hreinsson with Iceland

Croatia have achieved their first objective of reaching the last 16, giving them the perfect opportunity to rest some of their players following the superb win over the Argentinians. Coach Zlatko Dalic is well aware of Iceland’s strengths and will put out a midfield that he hopes will build the play, score goals and help the side top the group with a perfect nine points. - Vjekoslav Paun with Croatia

Did you know?
Croatia could become the fifth team in the history of the World Cup to win all three of their group games without conceding a goal, a feat previously achieved by Brazil at Mexico 1986, Italy on home soil in 1990, Argentina at France 1998 and Uruguay here at Russia 2018. 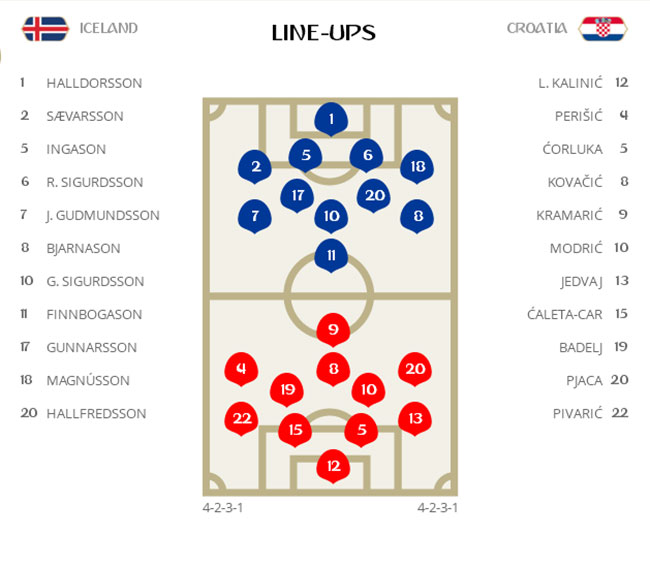 Indonesia police chief, others removed over soccer disaster
10 minutes ago