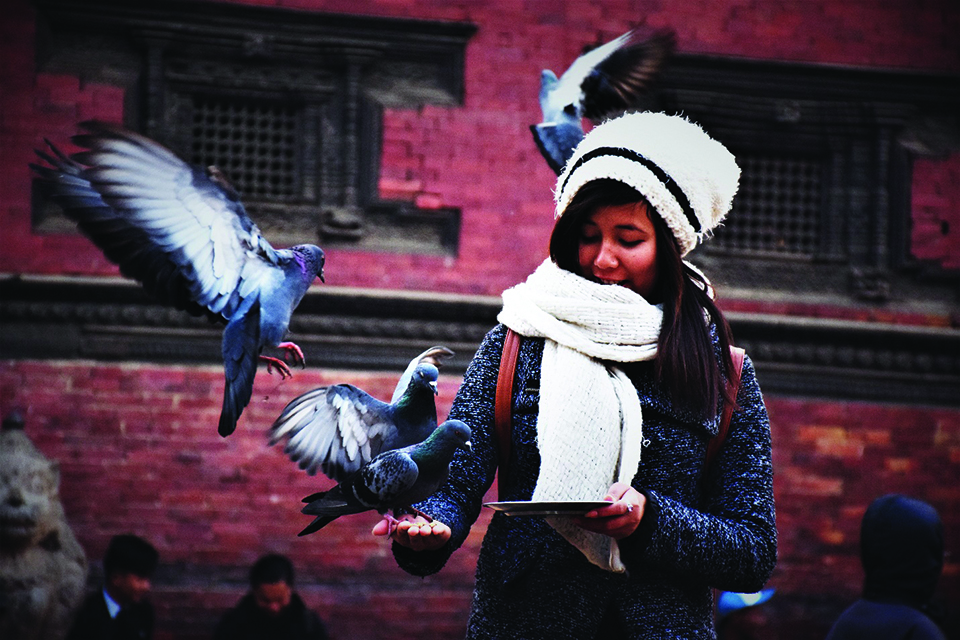 The author has a Master’s Degree in Environment Science and works as a freelance researcher
bhatt.v.d@outlook.com

Let the birds search food on their own. Mother Nature has given them skills to do so

Have you ever been to Patan Durbar Square during morning hours? If you have, you must have noticed huge flocks of pigeons enjoying seeds offered by denizens of Patan and visitors. There are several positive aspects to it but more recently it is increasingly becoming an issue of public health, a nuisance and something that seriously warrants our attention. In this article I’m going to analyze pigeon feeding from different aspects. Analyzing something that is closely related to human behavior and recommending changes to such behaviors could be controversial but it is always rational to analyze and come up with a conclusion to contribute to wellbeing of the city, its landscape and people.

Feeding birds has become a routine practice to many people in Nepal, especially in Kathmandu Valley. This behavior is inspired by culture and religion, mostly Hinduism and Buddhism that has altruism at its center and driven by the notion that human beings are most superior and hence caretaker of planet and its beings. Thus the practice is connected with different customs in Nepali culture. It is a dedicated routine of visitors in different temples like Krishna temple, Sankata, Mahankal, Indrayani, Kal Bharav and several other holy places.

Feeding birds has great psychological advantage. You feel connected to nature and it makes you feel happy. It is like a psychotherapy session for feeder and it helps them relieve stress. There is no specific data to quantify this, but it has definitely helped in maintaining a healthy psychological demeanor in people.

There are several public health related issues that need to be carefully analyzed. The droppings of pigeon are connected to several zoonosis that mostly affect people with weak immunity and patients suffering from HIV/AIDS, cancer and pneumonia. Three major diseases are associated with pigeon feces: histoplasmosis (an illness caused by fungus that grows on pigeon droppings), psittacosiss (caused by bacteria found in droppings of pigeon and other birds) and cryptococcosis (a respiratory ailment caused by a fungus that grows and is found in pigeon droppings). Since most of these diseases afflict a small fraction of people (the ones with very weak immunity), it remains overlooked. Although there are no researches on number of pigeons in Kathmandu Valley, there has been noticeable increment in their population in the recent times.

In many countries pigeons in urban settings are considered as feral and source of health hazards. Several cities have banned bird feeding.  Singapore, for example, fines whooping 500$ if you are found guilty of feeding birds. One of the major reasons for taking legal action against bird feeders is that it is very difficult to control birds since they are air borne the only way we can control their movements is by modifying our behavior.

Kathmandu valley is known for its ancient architectures but they are not well taken care of. Apart from earthquakes that caused severe damage to historical structures and buildings, the feces of pigeons are reducing the beauty of these artifacts. Pigeon droppings are acidic in nature and our ancient monuments that are mostly built of stones are subject to some serious and irreversible damage from this. It is also accelerating process of soiling (accumulation of soil) in the very complex artistic stone carvings, which in turn support vegetation on the top of the monuments. All this will cause severe damage to these monuments.

It is our duty to help make city more habitable. Limiting bird population is in hands of people of Kathmandu valley. We should start feeding them less often and feed lesser amount. Let them search their food on their own. Mother Nature has given them skills to do so. The abundance of food and shelter are major reason behind increment in their number. They can breed year round and hence their population keeps increasing.
While designing house we should not leave enough platforms and spaces where these birds can reside and breed. We can also use spikes or other means to avoid them in certain areas. Reducing the amount of food and removing shelter ground for these birds can help limit their population. Durbar Square management committees and temple management committees can also play an important role. Feeding pigeons is part of our culture but it warrants serious attention from people of Kathmandu Valley.

145 species of birds found in Bhaisegauda

SYANGJA, Jan 8: One hundred fifteen species of birds have been found at Bhaisegauda of Putalibazar municipality in Syangja district... Read More...

CHITWAN, Jan14: During winter, different species of birds migrate to Nepal. Among them most of the species are winter water birds... Read More...