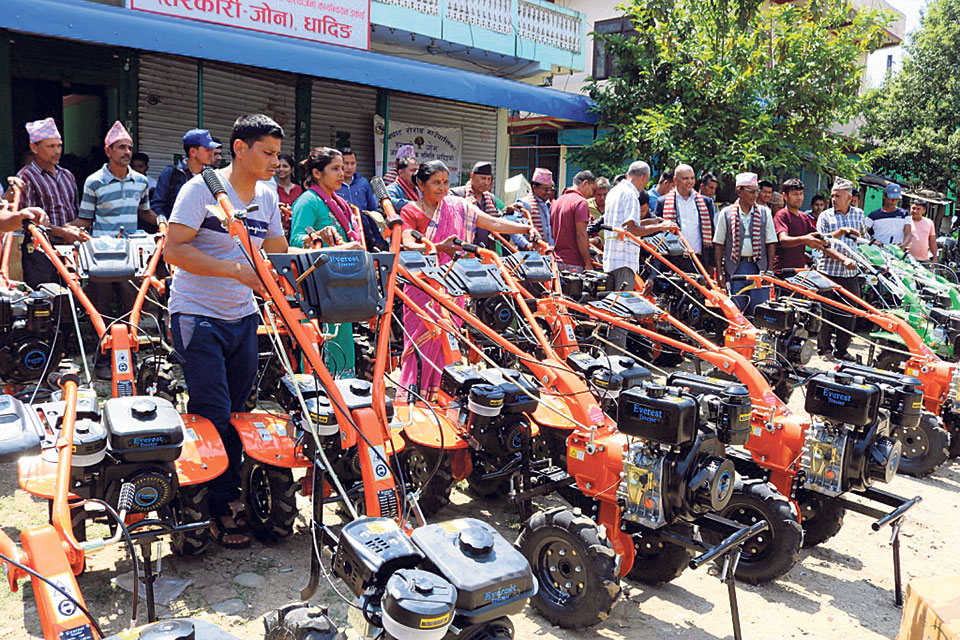 DHADING, April 22: Ram Sharan Tripathi of Siddhalek Rural Municipality Ward-4 in Dhading has been involved in farming for the past 25 years. Farmers like him had to wait for their turn to use oxen for plowing as there were limited number of oxen in the village. He has now bought a mini tiller which has made things lot easier for him.

Tomatoes, beans, cucumber and gourds are among some of the vegetables grown in Tripathi’s farm. He also produces crops like rice, wheat and maize.

Stating that farm equipment are making things lot easier, he encourages farmers to adopt modern technology to keep up with modern times and changing production and consumption patterns.

“Through mechanization, we can increase production with limited investment. So, many farmers are buying modern farming equipment,” he added.

Dhading district is considered a pocket area for vegetables production. Salang, Jogimara, Benighat, Dhusha, Gajuri, Naubise and Kewalpur are major farming areas in the district. Vegetables produced in these areas are sent to markets in Kathmandu, Pokhara and Narayanghat, among others.

After production started declining due to shortage of oxen and laborers, local units have launched mechanization drive. Many local units in the district are providing grants to local farmers to buy equipment like tillers.

Hari Bahadur Chepang of Krishnabhir in Benighat Rorang Municipality received has received 50 percent subsidy to buy a tiller. “I can now plow a field, which would otherwise need four pair of oxen, in just an hour by using tiller. These equipment are faster and more efficient than oxen,” added Chepang.

Local units are encouraging farmers to embrace modern technology as per the government’s policy of prioritizing use of modern farming tool and equipment. The policy was issued five years ago.

Along with Gandaki Rural Municipality in Gorkha, Benighat Rorang and Siddhalek rural municipalities of Dhading have opened Vegetable Zone Office. The office has been providing farmers with equipment and seeds. Over 200 farmers have received various kinds of equipment on grants from the office so far. This office has also providing training to farmers on use of modern equipment.

Senior Officer of Vegetables Zone Dhading Keshav Raj Kafle said that local farmers are giving up traditional farming equipment and turning to modern equipment like tillers. “We are providing 50 percent subsidy to farmers for purchase of mini tiller, digital weighing scale, plastic ponds and water pump, among others,” he added.

Cardamom farming on the rise in northern Dhading

DHADING, May 29: Narshingh Tamang of Khaniyabas Rural Municipality-2 has grown cardamom saplings all over his fields. In fact, this has... Read More...

Nepal records highest single-day spike in last one and half months with 3,421 new COVID-19 cases
23 hours ago

Karan Chaudhary announces his candidacy for NADA president
4 hours ago

Storm buffets venues but Tokyo Games go on
6 hours ago