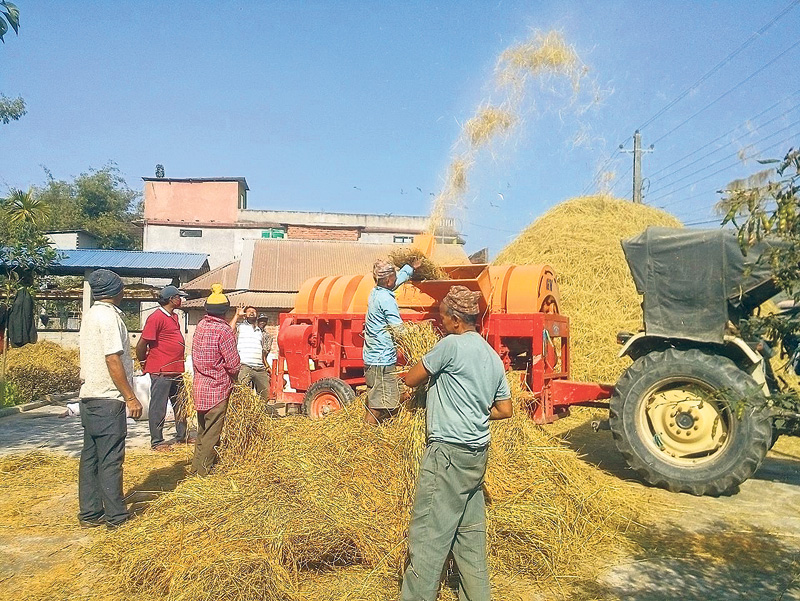 JHAPA, Dec 21: Food products prices in the market are ever increasing. Because of soaring prices of rice, pulse and vegetables, managing two meals a day has become a challenge for the poor. On the other hand farmers are forced to sell their produce at cheaper rates. Paddy farmers in Jhapa lament that due to the gross negligence of government bodies, every year they are deprived of returns from their produce.

“This is not a new story. Government is not concerned about securing our interest. As it has not fixed market prices for the paddy we are selling them at cheaper rates while the traders are selling the same at higher prices to the consumers,” Prithivi Bikram Rai, of Mechinagar Jhapa said. “On the one hand, consumers pay very high prices for rice, and on the other hand, farmers like us get very low price for the paddy. This makes the middlemen rich.”

Rai accused the government turning dumb and deaf when it comes to securing the farmer's interests. Even though they have been facing loss, year after year, because of the sluggishness of concerned authorities, the government remains indifferent, he said.

Farmers like Rai have been left in the lurch due to the inability of concerned authorities to fix inter-ministerial row. Two months ago the Ministry of Agriculture (MoA) had fixed price for paddy. Though the prices were not as they expected, it was somewhat close to the farmer's expectation. “The prices proposed by the ministry were not actually what we expected. But still they were better and we were really hopeful of getting better prices for our produce this year, than last year,” Rai said.

However, their hopes were dashed after the Ministry of Supply rejected the proposed prices. Since then both ministries have failed to reach consensus on a new set of prices. This has infuriated farmers who feel that the government is trying to discourage farmers. “Instead of encouraging farmers, the government is hell bent on discouraging us. It seems that we are not going to get appropriate price of our sweat and blood even this year also,” he said. “What's the use of working so hard in the farms if it does not pay off?”

It seems that we are not going to get appropriate price of our sweat and blood even this year also. What's the use of working so hard in the farms if it does not pay off?

A senior official at the MoA said that the ministry had proposed better prices for paddy this year by considering the long-held grievances of the farmers. However, the MoS rejected the proposed prices claiming that traders would not accept them.

“Officials at the MoS claimed that it would be of no use if the prices are not accepted by traders for purchasing paddy from farmers and government. In such a condition, the government would also be not able to buy paddy from the farmers,” he said elaborating on the unresolved standoff.

In its proposal MoA had proposed to provide Rs 828 for 40 kg of paddy, with slight variations depending on the quality of the rice. As the proposal was rejected and new prices have not been agreed, farmers are presently selling 40 kg of paddy at Rs 650.

Ranjit, a paddy which sells at expensive rates in the market, is fetching no more than Rs 700 per 40 kg, farmers say stating that price does not even return their investment.

District Agriculture Office informed that paddy was planted in 87,500 hectors in the district this year. Only half of this land has irrigation facility.

“Yield in farms without irrigation facility is very poor. This affects the earning of a farmer,” said Madeni Prasad Baral, a farmer from Birtamod. “We are given neither fertilizer, nor saplings nor irrigation facilities by the government. And on top of all these woes, the government does not even fix the minimum price benchmark for selling our produce,” he lamented.

He informed that for the past few years he has been continuously bearing loss from the paddy sales. “I was hopeful that this year the government would address our concerns. But this year also they have been excusing themselves on various pretexts, while farmers like me are forced to bear loss.”

Baral said that paddy production is very costly and takes lot of efforts adding that tractors charge steep prices to plough even a small farm. “If we add labor, tractor, seed, fertilizer and sapling costs, there is huge investment in paddy farming from plantation to harvest. But the government does not see this.”

KATHMANDU, Nov 17: The Ministry of Energy (MoE) has taken initiative to set land prices to acquire land needed for the... Read More...