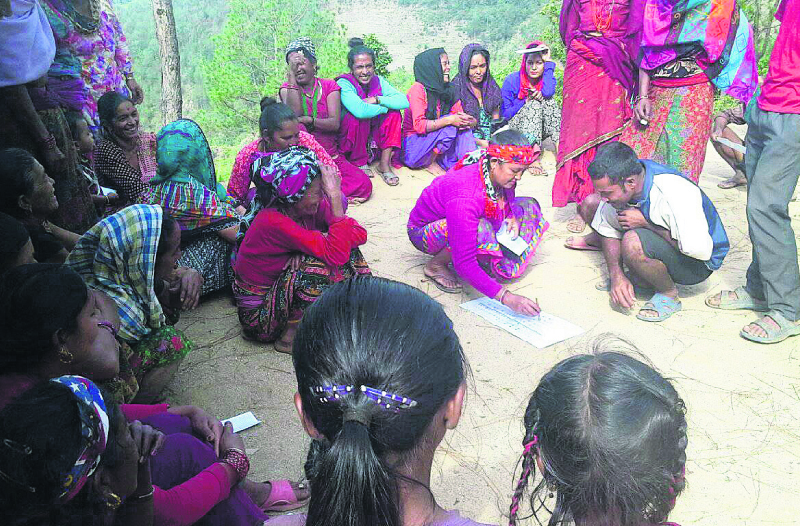 KHOTANG, June 3: On February 20 when the Pushpa Kamal Dahal led government announced local elections after a hiatus of nearly 20 years, the whole nation sprang up in joy. Like many others, locals of Khotang district too could not wait to exercise their voting rights in the polls originally scheduled for May 14. To their disappointment, the government then decided to hold polls in two phases - on May 14 and June 14, with Khotang also falling in the second phase.

After severe objection from the Madhes-based parties, the government, on April 23, again postponed the polls date for the second round in an apparent bid to bring the agitating parties on board. According to the latest schedule the polls are now slated for June 28. But locals of Khotang are disappointed with the date as it falls during peak paddy plantation season.

Voicing his disappointment, Sangram Rai, a youth farmer of Sakela Rural Municipality-1, said many farmers in his area would not be able to exercise their voting right - an integral part of democracy. “Most of us will not be able to cast votes as we cannot skip our agricultural works, on which our livelihoods depend,” said a displeased Rai, who is also operator of Dadakharka Multi-purpose Agriculture Center.

“Although some might manage to caste their votes, many of us won’t be able to do so,” he added.

Khotang district is a part of the Province-1 and falls in the eastern region. Many parts of the district are not connected to road networks. Due to its rural setting, voters of many areas will have to walk over two hours to reach their nearest polling centers.

The time of traveling to the polling center, waiting in queue to cast vote, and returning home could take many hours of their highly busy day. As many locals in the rural district depend on agriculture to make their living, political parties are concerned that participation of farmers in local elections might be very low.

Faudansi Kari, a local of Bahunidada in Tuwachung Municipality-1, agreed with Rai’s statements. Stating that mid July is the time when farmers have to dedicate their time to their farms; Kari said that holding polls during the time frame will prevent many farmers from exercising their voting rights.

Kari is also operator of the Jista Agriculture Firm. Although the government’s announcement to hold the local elections excited him, the constant deferrals, which is the third time now, has upset him. “Even more discouraging is the fact that the government rescheduled the elections for a date which falls during peak farming season,” he said.
“We could have easily participated if the government had held the elections on the originally scheduled date. Even the second date after the first deferral was viable for us. However, in the name of forging consensus among disgruntled political parties, the government is deliberately preventing us from exercising our voting rights,” added Kari.
Not just the inappropriate date for elections, many local farmers said they might not participate in the elections because many of the previous election winners whom they had voted failed to live up to their promises. Even if they can dedicate some time for the elections, failure of the previous election winners have also discouraged them from participating in the historic event.

“As the previous elections did not bring any changes in the lives of farmers, many will definitely prioritize agricultural works over voting,” Kari opined.
Khotang has a total of 15,202 hectors of arable land for paddy farming. Majority of the farmers are not happy with the government’s decision to hold the elections by ignoring the season and time.

In many villages of the district, farmers schedule date to use irrigation canal for their farms. Farmer families whose turn to use irrigation canal on the day of elections will be affected the most. If they opt to vote and irrigate their farms, they will have to wait as long as one week or even more for their turn to use canal again. Not just that, many farmers get involved in farming activities by utilizing rain.

And if it rains heavily, voters need to walk through slippery paths on the edge of dangerous cliffs to reach the voting stations, not to mention the risks from looming water-induced disasters like landslides and floods.

JHAPA, Dec 21: Food products prices in the market are ever increasing. Because of soaring prices of rice, pulse and vegetables,... Read More...

GORKHA, Sept 13: Acute shortage of fertilizers during the peak season of farming has put farmers in Gorkha district in dilemma.... Read More...

Six contractors including Pappu Construction in govt blacklist
10 hours ago

Technical education is the basis for prosperity of country: Minister Pokharel
8 hours ago

Nepalgunj airport to be developed as hub airport: Minister Bhattarai
8 hours ago

Local administration in Kathmandu urges people not to participate in rallies, protests
15 hours ago