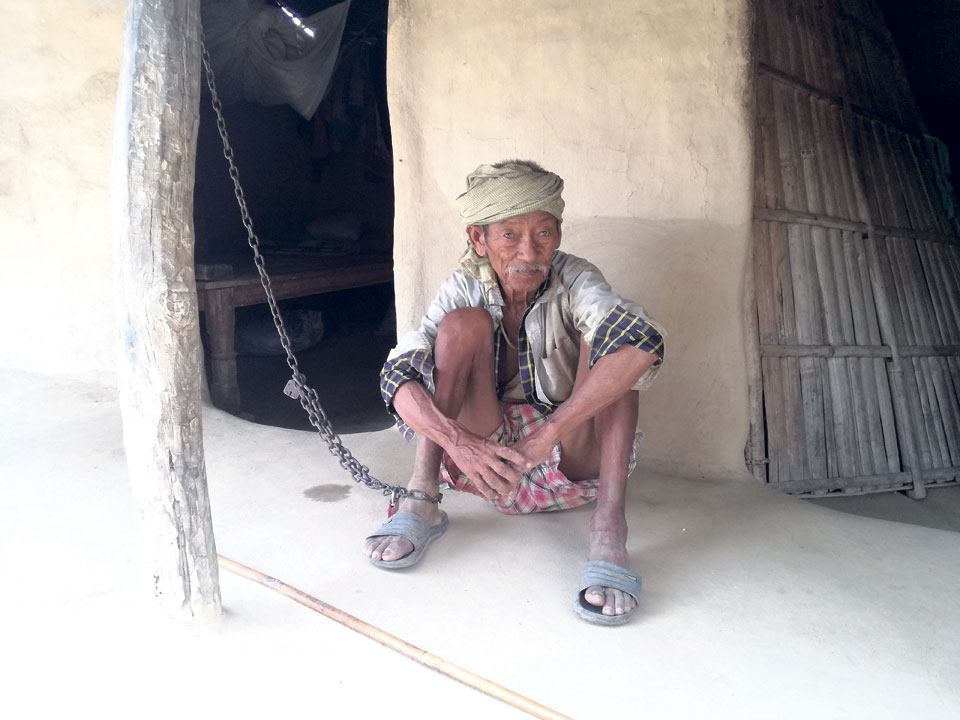 Mentally ill Mati Waiba, 70, of Bateshwar Rural Municipality-1, Dhanusha is tied to a wooden pole of his house through an iron chain for the past four months. Photo: Suresh Yadav/Republica

JANAKPUR, July 29: Seventy-year-old Mati Waiba of Bateshwar Rural Municipality-1, Dhanusha, has been in iron chains for the past four months. The mentally ill person's family says he has been chained because he runs away from home.

Four months ago, Waiba disappeared from his home. His family and neighbors spent hours searching for him. According to his family members, they had to undergo lots of trouble to find him. Even when he is home, he mutters that he is late for home and needs to go home immediately. That is why they are left with no choice but to keep him in chains so as not to prevent him from leaving home again.

Waiba has three sons and one daughter. However, due to extreme poverty, he only has his wife Afali Maya, 68, to take care of him. His eldest son is employed at the Sindhuli-based district court and does not care about family matters. His other two sons work as daily wage laborers in Kathmandu and visit home about three times a year. On the other hand, the married daughter is busy with her own family and cannot give time to her parents.

“The earning of the two sons is hardly sufficient for livelihood. Our two sons are also not married because we do not have the financial capacity to take care of additional family members,” said Waiba's wife Afali.

Waiba has not been able to get treatment due to the extreme poverty of the family. “We have not even thought of taking him for treatment. We do not have sufficient money and could not afford treatment at all,” she added.

DAMAK, July 5: He had an option to live a comfortable life as a royal physician in the Bhutanese capital,... Read More...

ILAM, Mar 12: Suryodaya Municipality of Ilam has announced that it will pay for the medical treatment of a nine-year-old mentally... Read More...

KHOTANG, Aug 14: Police have arrested a person on the charge of raping a mentally retarded teenage girl. ... Read More...

Two killed in mini truck accident in Dhading
46 minutes ago

One killed, four injured in Kavre jeep accident
4 hours ago