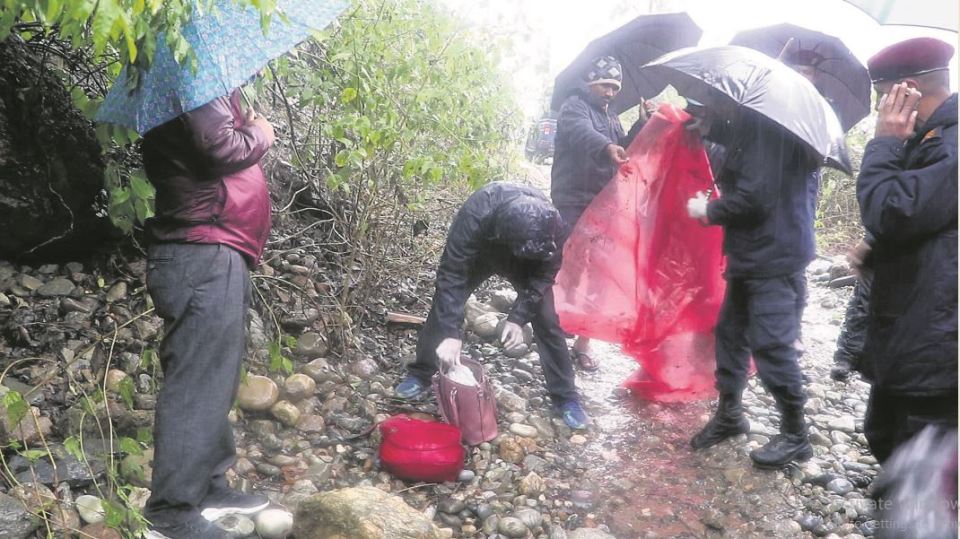 DHADING, Jan 18: On Friday, it was the rice feeding ceremony of the six-month old youngest son of Binaya Lamichhane and Jamuna Regmi Lamichhane. The Lamichhane couple - locals of Thankot, Chandragiri Municipality of Kathmandu - had another son, aged two. The two children are missing after the couple attempted suicide along with them on Thursday evening by diving into the Trishuli River at Benighat area of Dhading district. While Jamuna's dead body has been recovered, Binaya was saved by the locals.

According to relatives, the family was heading to Dhading to observe the rice feeding ceremony of the baby at the parental house of Jamuna. However, instead of reaching the destination, they got off 50 kilometers away at Badarmode, Benighat. Police have recovered new clothes and other baby stuffs needed for rice feeding ceremony.

At Badarmode, the couple met Badan Kumari Shrestha who runs a small hotel there. She reported that the husband and wife seemed to discuss some matter while carrying their children. "Here they warmed the milk for their younger child and fed him, which was brought by them only. Then they crossed the suspension bridge and went to the other side," Shrestha said.

"I suddenly heard people crying for help. I then took along some locals and rushed to the site, I realized it was the same couple," Shrestha stated.

According to the police, the couple took the sad decision as they were heavily indebted. A suicide note recovered by police, other details, and statement of the survivor confirm that the couple had made investment in an online business. In the suicide note dated 16 January and left at home, many persons have been mentioned as their debtors and the details of transactions. On her facebook page on 4 January, deceased Jamuna has been found to have vented anger and frustrations against 'high interest rate torture'.

"Binaya has reported that the decision was taken due to heavy loans. He is in police custody and the matter is under investigation," said SP Rabindra Regmi.

The search for the babies is underway. Police say they are preparing to file a case against Binaya for encouraging suicide.

Lack of school compelling students to leave their loved ones

DHADING, Nov 19: Shuvamaya Tamang of Benighat Rural Municipality-1, Jarung, has six children but only one stays with her. One... Read More...

DHADING, May 3: The sex composition of the candidates belong to different political parties who on Tuesday filed their nominations... Read More...