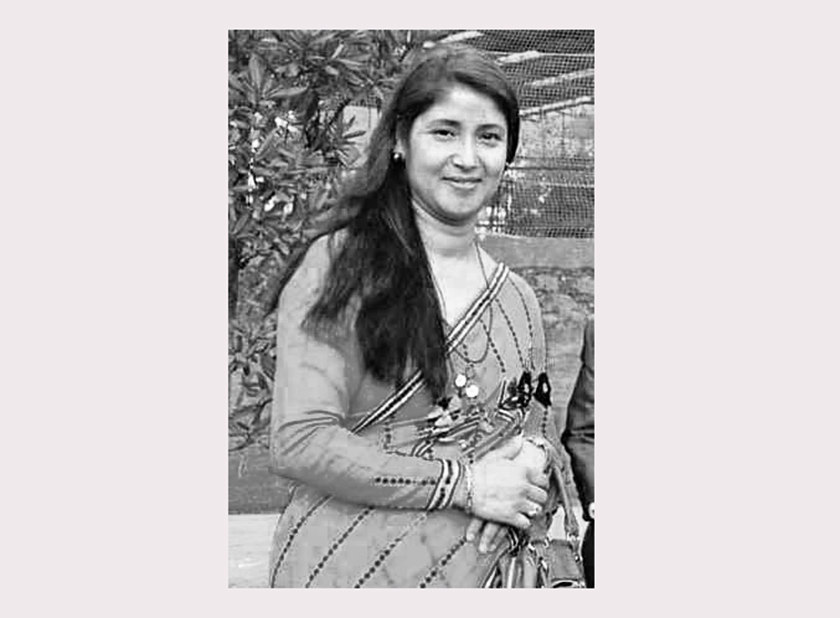 KATHMANDU, Feb 11: Muna Karki, the wife of former government secretary Arjun Karki, who was seriously injured after an attack inside their house, died on Monday afternoon. Their domestic help was also found dead inside the house.

According to police, Karki was found in a critical condition inside the kitchen of her Sanepa-based house, before being pronounced dead at the Star Hospital. “It looks like she [Karki] was attacked with a sharp weapon by the domestic help,” police said.

When former secretary Karki returned home from Pasupatinath at around 11 in the morning, he reportedly witnessed the domestic help Bijay Chaudhary hanging by a rope from the staircase of the house while the wife was in a critical condition in the kitchen.

Karki often visits the Pashupatinath temple on Mondays with his wife. But this Monday, Karki went to the temple alone. His wife had stayed home to drop their 11-year-old son to school at 7 am.

According to Karki, upon returning home from Pashupati, he rang the door bell multiple times. He also called his wife, but no one answered the door. Sensing something was wrong, Karki went to the kitchen window and peeked inside. He saw the help, Chaudhary, hanging by a rope from the staircase. Petrified Karki started screaming. Then the neighbors came and police were informed.

After entering the house, police saw blood flowing out of the kitchen door. Muna, seriously injured in the head, was lying unconscious on a pool of blood on the floor. She was rushed to the nearby Star Hospital. But, after reaching the hospital, the doctors pronounced her dead.

A joint team of police from the Metropolitan Police Range, Lalitpur and Metropolitan Crime Division, Kathmandu are investigating the case.

According to police, a CCTV camera installed in the house compound shows that 49-year-old Muna was brutally attacked by the 22-year-old domestic help Bijay Chaudhary and he later hanged himself. Karki had installed the CCTV camera on the house premises two years ago following a theft incident. The CCTV camera could see a little bit through the kitchen window.

“We saw the CCTV footages. There is no doubt that Chaudhary hanged himself after brutally attacking Muna,” said DSP Santosh Tamang, who is also the spokesperson of the Metropolitan Police Range, Lalitpur.

DSP Tamang also said that broken pieces of a plastic stool were found on the kitchen floor. Police suspect that Muna’s head was smashed on the floor several times.

Two arrested on charge of murder