Rapid Assessment of Socio-Economic Impact of COVID-19 in Nepal 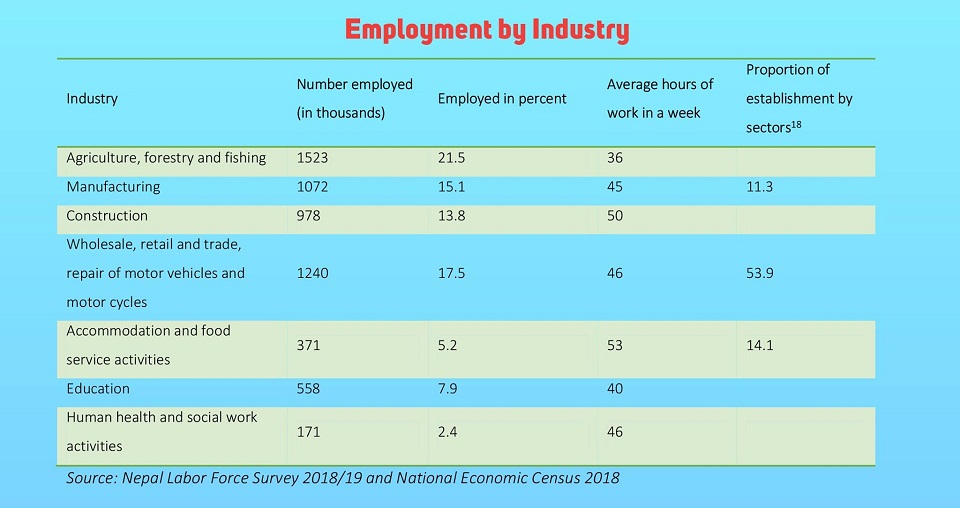 * Fall in remittance is likely to range between 15 to 20 percent this fiscal year.

KATHMANDU, May 17: Three in every five employees of both formal and informal micro, small and medium enterprises (MSMEs) in Nepal have lost their jobs as a result of coronavirus (COVID-19) pandemic, according to a study commissioned by the United Nations Development Program (UNDP) in Nepal.

The study  - ‘Rapid Assessment of Socio-Economic Impact of COVID-19 in Nepal’ -  conducted by the Institute for Integrated Development Studies (IIDS) has revealed that the MSMEs across Nepal have witnessed a fall of 95 percent in average monthly revenue and that they can sustain barely for around two months in the absence of external support measures if the ongoing nationwide lockdown enforced to contain the spread of the COVID-19 is extended further.

Stating that the impact on labor differs by the nature of their job contract, the study revealed that permanent workers have faced either pay cuts or unpaid hiatus, backed by strong labor laws that discourage layoffs. Similarly, seasonal and informal workers who represent 60 percent of the labor force in Nepal have faced job cuts and losses after the outbreak of COVID-19 in Nepal some two months ago.

These findings are based on a survey of 700 businesses and 400 individuals and consultations with over 30 private sector organizations and government agencies. Most of the MSMEs have sought cash subsidies from the government as a part of economic stimulus, followed by subsidy on interest rate, concessional loan, and rental waiver by landlords to sustain their business enterprises.

The study concludes that the impact of COVID-19 pandemic on Nepal's socio-economy could magnify largely on the basis of how events will unfold in tourism, trade and foreign employment and if or when the spread of the pandemic overwhelms a grossly inadequate health infrastructures in the country. It also concludes that Nepal’s heavy geo-economic reliance on India and China, and the nature of contagion originating in those countries could equally magnify the socio-economic impact of this global pandemic in Nepal.

The study predicts that tourism receipts in Nepal are likely to fall by 60 percent in 2020 resulting in a loss of foreign currency earnings worth $400 million as the direct consequences of international travel restrictions and the fall in the discretionary incomes among people worldwide.  Similarly, the fall in remittance is likely to range between 15 to 20 percent this fiscal year. The cumulative impact of trade, tourism and remittance shocks – as well as the negative economic externalities they trigger in allied sectors --  Nepal’s projected pre-COVID GDP growth rate of 8.5 percent will decline to well below 2.5 percent in 2019-2020, and severely constrain a rebound in 2020-2021.

The COVID-19 crisis has rendered temporary workers, internal migrants, day laborers the most vulnerable based on income, and their ability to sustain through the slowdown. Not being able to find an alternative source of income is judged to be the main impact of the crisis on those already vulnerable or otherwise engaged in precarious work. Similarly, the study showed that the crisis has affected women, especially from lower income groups, differently from men as women typically work in industries which are comparatively less tele-commutable such as hospitality, wholesale and retail, keeping them out of work. The survey results indicated that 28 percent of men lost their jobs during the lockdown, compared to 41 percent of females.

The study says that the path to recovery is largely based on how well all three tiers of the governments are able to redirect the existing fiscal allocations; free up resources through efficiency and austerity and explore new borrowing and partnerships. These efforts must be synchronized with a judicious combination of public expenditures and monetary stimuli to help address the urgent development objectives of re-investing in health, providing social protection and saving jobs, easing access to concessional finance for firms and boosting sectors with future potential in job-creating growth.

293 new cases of coronavirus recorded in the past 24 hours: Health Ministry

How sustainable is hydropower development in Nepal?
59 minutes ago