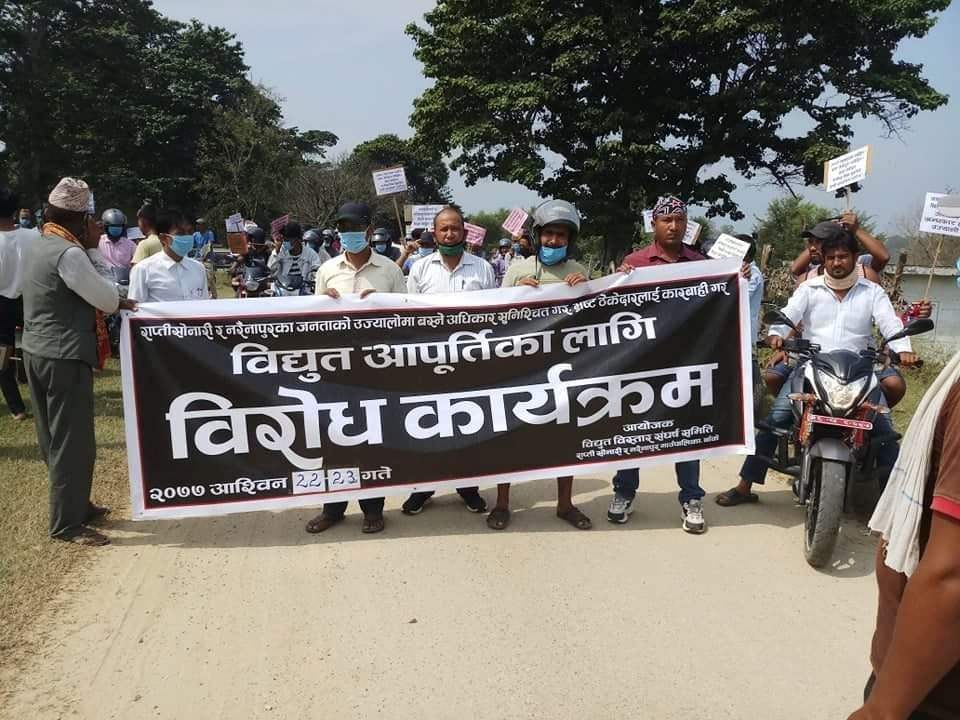 NEPALGUNJ, Sept 9: Tens of thousands of households in several parts of Nepalgunj have been deprived of power supply as the ongoing electrification projects have not yet been completed.

Demanding quick response to their grievances, the locals of Banke and Rapti recently hit the streets. The protestors blocked several parts of major roads including the East-West Highway on Wednesday to draw the government’s attention to their problems. They organized a rally and chanted slogans for two hours in the afternoon.

The electrification project is in limbo as some contractors have fled, while a few others have filed cases against NEA instead. For instance, 'Ushma/Gauri Parbati JV' company was supposed to complete electrification works in three wards of Raptisonari and Narainapur rural municipalities long ago. It had received the contract from Nepal Electricity Authority (NEA) seven years back. As the contractor could not meet the deadline, NEA canceled the deal recently and took hold of the project. Dissatisfied, the company has filed a case against NEA at Nepalgunj High Court.

"They blame each other. Worse still, contractors who failed to complete the task within the given deadline have filed cases against NEA. Thus, they simply stopped working. When will we get justice?" fumed Pattu Tharu, a former lawmaker and coordinator of power extension struggle committee, Nepalgunj. "We took to the streets in the hope of being able to draw the attention of the authority concerned. We will intensify our protests if we are not heard.”

The struggle committee had earlier submitted a memorandum to several ward offices as well as the NEA office. However, the recent developments have only disappointed the locals further.

Same is the case of another project related to the Kohalpur–Dhampur KV transmission line. “The contractor has filed a case against NEA there as well. Users’ group has filed a case against the contractor. When there are cases after cases and they are not sorted out through fast track, we can not expect a solution of the problem anytime soon," said Tharu. "Something like power supply should have been the utmost priority of the government. But this has not been the case," he added.

PASHUPATINAGAR, Sept 13: Power supply in the hilly districts of eastern region has been disrupted for past 24 due to... Read More...

NEA trade unions up in arms against Ghising

KATHMANDU, Nov 12: At a time when Nepal Electricity Authority (NEA) is chalking out plans to eradicate load-shedding altogether under the... Read More...

How Hukam derailed Nepal’s vaccine procurement: a story of power, greed and commission
16 hours ago