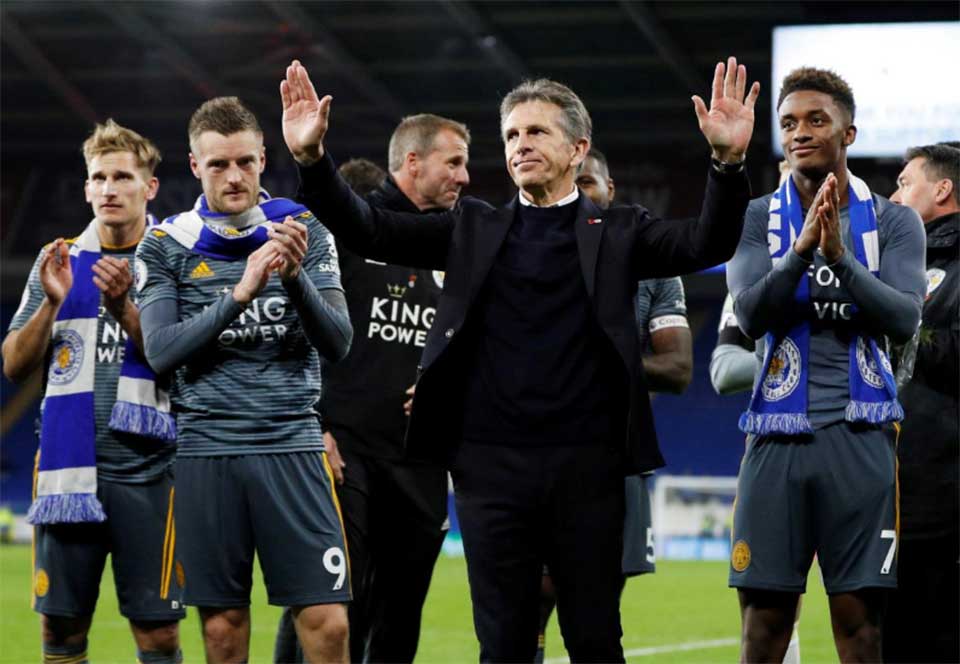 LONDON, Nov 4: Leicester City’s traumatic week ended with a 1-0 win at Cardiff City although the result was never the chief concern on a day when the tributes flowed for the Midlands club’s late owner Vichai Srivaddhanaprabha who died in a helicopter crash.

Several Leicester players were due to fly to Thailand later on Saturday for his funeral and a minute’s silence was held at all Premier League grounds to mark last week’s tragedy outside Leicester’s stadium in which four other people also died.

TV requirements saw Saturday’s games staggered over four separate kickoff times with Liverpool moving top of the Premier League — at least until Manchester City entertain Southampton on Sunday — after their 1-1 draw at Arsenal.

Manchester United recovered to win 2-1 at Bournemouth to move seventh, Newcastle United recorded their first league victory of the season, 1-0 over Watford, while Everton and West Ham United also won.

The final game of the day was arguably the most dramatic as Tottenham Hotspur almost threw away a three-goal lead against Wolverhampton Wanderers but held on to win 3-2.

Most attention was inevitably focused on the Cardiff City Stadium where tributes included a wreath brought on to the pitch before the game and the unfurling of a huge flag among the crowd in memory of the 60-year-old Thai billionaire.

A second-half goal from Demarai Gray sparked jubilation amongst Leicester’s players and fans, although referee Lee Probert will face criticism for booking the forward after he took his shirt off in celebration to reveal a T-shirt with the words “For Khun Vichai” across the front.

“I feel proud, it’s been a really tough week for everyone,” said Leicester keeper Kasper Schmeichel.

“The way everyone at the club handles themselves is a testament to the family Vichai built.”

At the Emirates, a superb late strike from Alexandre Lacazette gave Arsenal a point after James Milner, who later broke his nose in a freak clash with team mate Joe Gomez, had given Liverpool a second-half lead.

A richly-entertaining game threw up chances for both sides as Liverpool manager Juergen Klopp maintained his record of never losing to the Gunners in six encounters.

Arsenal dropped to fifth after being overtaken by Spurs who climbed back into the top four after their win at Wolves.

They looked comfortable leading 3-0 at Molineux after quickfire goals from Erik Lamela and Lucas Moura and then a second-half strike from Harry Kane.

However, Premier League debutant Juan Foyth gave away two penalties which were converted by Wolves’ Ruben Neves and Raul Jimenez to leave Spurs clinging on until the final whistle.

On the south coast, Manchester United’s late win, via a Marcus Rashford strike, failed to alleviate Jose Mourinho’s disappointment at another below-par performance.

“I said at halftime I was the luckiest manager in the Premier League,” said Mourinho who added that he thought Bournemouth should have been 5-2 or 6-2 up by then.

The win moved United level on points with sixth-placed Bournemouth.

Newcastle fans finally had something to celebrate as Rafa Benitez’s side won at the 11th attempt after Ayoze Perez flicked home a 65th-minute header from a Ki Sung-yeung free kick.

The win took Rafa Benitez’s side out of the relegation zone at Cardiff’s expense, with West Ham, who beat Burnley 4-2, also edging further clear of the scrap at the bottom.

The Hammers’ deserved win was their first in the league since September and owed much to two goals from Felipe Anderson.