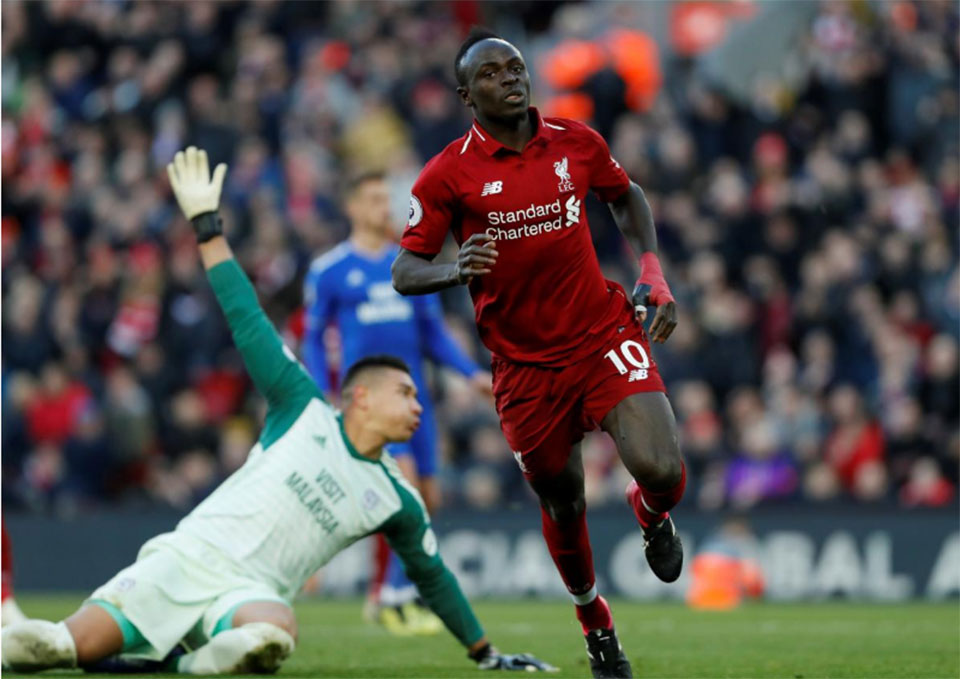 LONDON, Oct 28: Sadio Mane scored twice and Mohamed Salah continued his return to form as Liverpool eased to a 4-1 win against lowly Cardiff City to move top of the Premier League at Anfield on Saturday.

Mane scored two fine second-half goals while Salah ended any suggestion that he was suffering from a ‘goal drought’ with his fourth strike in three matches to go alongside two assists.

Xherdan Shaqiri was also on target for the hosts while Callum Paterson netted for a struggling Cardiff side who remain 17th with five points from their opening 10 matches.

Liverpool, still unbeaten and winners of eight of their 10 league matches, have 26 points — three clear of champions Manchester City who will reclaim top spot if they beat fifth-placed Tottenham Hotspur at Wembley on Monday.

“Happy for the result and the performance of the team,” Mane told the BBC. “A little tight in the second half but at the end we controlled the game, tried to push on and scored twice to make it easier.

“I was very happy of course to score but most important is the three points.”

Bournemouth also continued their fine start to the season with Callum Wilson scoring twice and talented youngster David Brooks on target in a 3-0 victory at struggling Fulham.

Eddie Howe’s side, who are sixth with 20 points, are enjoying their fourth season in the top flight.

“We are flourishing and took the three points,” forward Wilson said. “We are getting better at counter-attacking teams as you saw with the second goal. Being clinical is the main thing.”

In the late game, Leicester City fought back for a 1-1 draw at home to 10-man West Ham United but that was overshadowed by reports in British media that a helicopter belonging to the Midlands club’s owner Vichai Srivaddhanaprabha had crashed in the car park on Saturday evening.

After Salah poked Liverpool ahead in the 10th minute, the Reds enjoyed 86 percent possession and had 12 shots in a commanding first half, the only surprise being that Juergen Klopp’s side did not add a second goal before the break.

It took until the 66th minute for Liverpool to add a second, with Mane wriggling through a couple of challenges before unleashing a fierce drive into the corner with his left foot.

Cardiff City set up a potentially nervy finish when Paterson scored in the 77th, but Shaqiri and Mane converted Salah passes within three minutes of each other to seal victory.

“We are a top team. To be successful we have to win these games,” Shaqiri said. “They are tough, not always nice to play.

“It is the beginning of the season, so we have to keep going like this, if we do we are going to have a successful year.”

Like Bournemouth, Watford have been one of the early-season surprise packages and they too claimed their sixth victory in 10 games against a toothless Huddersfield side.

“Defensively this was not the performance we wanted. We didn’t look solid, stable or compact,” Terriers manager David Wagner said.

“In open play we were not aggressive enough to make them uncomfortable. I am disappointed because in recent weeks we had defended better, but it was our worst performance defensively for a while.

“Next week against Fulham is a belter and an opportunity that we have to use.”

Glenn Murray scored his 100th Brighton goal as the south-coast side beat Wolverhampton Wanderers to maintain their encouraging start, but rivals Southampton extended their league goal drought to five games when they drew with Newcastle.

LIVERPOOL, ENGLAND, Sept 14: Liverpool came from behind to earn a 3-1 home win over Newcastle United thanks to Sadio... Read More...

No decision on home ministry leadership until full text of SC’s verdict on Rabi Lamichhane is out: PM Dahal
2 minutes ago

Pokhara-Baglung Highway to be closed for upgrading
19 minutes ago