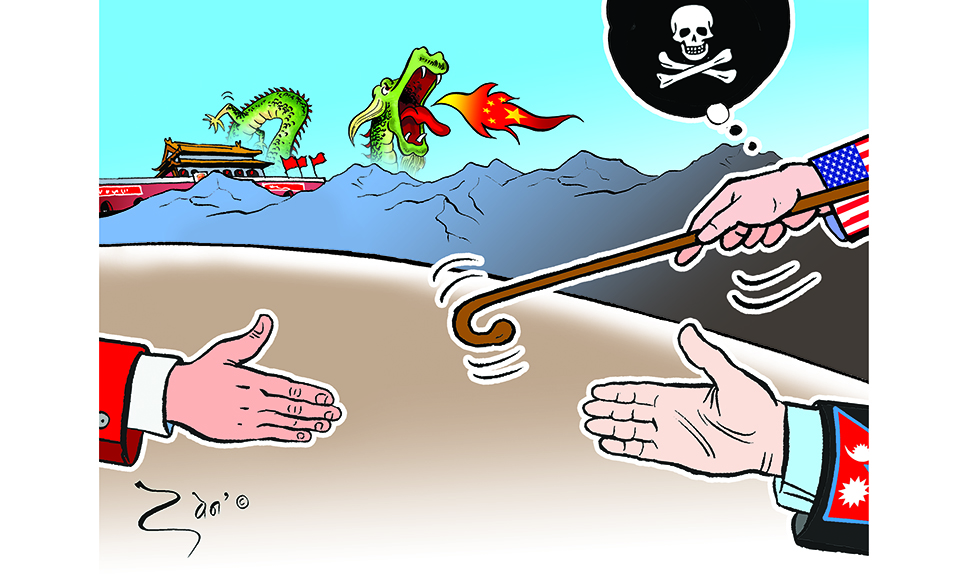 As Nepal respects sensitivities of its neighbors and friends, they must also respect Nepal’s priority to safeguard its independence, right to make decisions for its security and live with dignity

Nepal’s land mass represents ‘stair steps to the sky’ ranging from 62 meters in the south to 8,848 meters elevations of Mount Everest in the north within a distance of 184 kilometers.  Abundant water resources with potential of 83,000 Megawatts stand to be converted into hydropower.  Rich deposits of minerals in the diverse landscape are yet to be surveyed systemically.  Nepal lives in scarcity amidst such abundance but over six million Nepali youths are abroad in search of work opportunities.

Nepal is uniquely rich in diversity with over 125 ethnic communities and equal number of languages. The country is a melting pot of multi-ethnic, multi-religious and multilingual groups. Cultural pluralism remains a unifying factor.  Nepal’s culture of tolerance, harmony and respect for all remains firmly woven into the social fabric of its national life. But lately, under different pretexts in this strategically sensitive country, attempts are being made to weaken, break apart this social cohesion of lasting unity, draw divisions and create fault lines. The most and major challenging task now is how to firmly tie this diversity to unity in universal values of democracy, and rule of law.

When there was enough democratic space to work and shape things from within, Nepal’s communists under the cover of Maoism started armed struggle against nascent democracy from  1996, which took the tolls of over 17000 lives and destruction of physical infrastructures.  Peace process that was led by Nepali Congress mainstreamed the armed rebels into peaceful constitutional democratic politics and set in motion the historic path of democratic transformation.  In 2015, Nepal had its democratic constitution written by people’s representatives abolishing the 240-year-old institution of monarchy and becoming federal, secular democratic republic.  The peaceful transformation of armed conflict in Nepal is a rare example in contemporary world history. Under the new constitution, elections to local, provincial and federal levels were held in 2017.  The two communist parties that shared bitter and acrimonious past formed an electoral alliance to merge into Nepal Communist Party and won two-thirds majority to form the government.

Government started with the goal of “Prosperous Nepal, Happy Nepalis.” One year on, the euphoria has faded.  At a time when the pressing priority for Nepal should be to further consolidate and institutionalize democratic process and ensure stability for rule of law, Prime Minister is seen to be centralizing powers. This shows he does not trust the system he presides over. NCP chair Pushpa Kamal Dahal lamented before the Parliament on December 26, 2018:  “Work could have been done on a war footing if we had a traditional communist government because every piece of work takes time in democratic systems.” This raises question mark on their intentions.

State institutions including civil service are grossly politicized. The overreach in constitutional and judicial bodies has blurred the lines of separation of powers.  Latest Transparency International ranks Nepal among the most corrupt countries. Subordination of democratic values and ideals threatens democratic pluralism and leads to authoritarianism, emboldening radical and centrifugal elements with immediate and imminent costs to the nation. A global geopolitical analyst Robert Kaplan warns in his book The Revenge of Geography: “If the Nepalese government cannot increase state capacity, the state itself could gradually dissolve.”

Foreign policy has become globally oriented with the diversification of diplomatic relations with over 163 countries. Nepal’s geographic challenge is to maintain the best of relations with immediate neighbors—India and China—and remain constructively engaged with the wider international community and multilateral organizations.  India has been the most important partner and player in Nepal’s democratic and economic transformation. However, repeated economic blockades imposed by India on Nepal—the latest one being in 2015—have offended Nepal’s national pride and undermined Nepal’s independence and sovereignty.

On the other hand, China has risen in prominence in recent years through strategic investments. Beijing’s economic power has expanded its geopolitical ambitions.  It is no secret that neighbors are competing for influence and to remain a factor in Nepal’s internal politics. Nepal borders the Tibet Autonomous Region of China which constitutes the “core security interest” of China.

In a recent letter to Prime Minister K P Sharma Oli on his completion of one year in office, US Secretary of State showed increased interests on issue of Tibetan refugees in Nepal. Washington wants Nepal’s central role in a “free and open Indo-Pacific region; and global issues, including North Korea.”  A European Union report calls China an “economic competitor” and “systemic rival promoting alternative models of governance.”  Recently, The Wall Street Journal talked about “a united front … to force China to play by the rules or pay an economic and political price.”

After inauguration of new premises last month in Kathmandu, the EU expressed its wish to “address global challenges together with its partners including the wider security challenges,” to make Nepal a political partner by intensifying and deepening the political dialogue and broadening common agenda.

Given its location, and economic dynamism in the neighborhood, there are enormous opportunities for Nepal to benefit from. With global power politics focused on Nepal’s neighbors, there are also a complex set of interrelated challenges at its doorsteps.  Nepal must stay better prepared to make an objective assessment of emerging trends, understand the gravity of changing geopolitics and its possible implications on Nepal, and wisely judge every issue on its merits not to let the challenges of changing geopolitics overwhelm opportunities.

Nepal’s friends and well-wishers must understand that Nepal cannot antagonize neighbors and side with one at the cost of others. Nepal’s relations with neighbors are of highest priority, and the US and EU nations are valuable partners for democracy and development.  While Nepal fully knows and respects the sensitivities of its neighbors and friends, they must also respect Nepal’s priority to safeguard its independence, right to make decisions for its own security, survive in dignity and expedite the development.

Crossing these lines will create big troubles for Nepal making it a springboard but not without profound consequences for global peace, security and prosperity. There seems to be a growing disconnect between “facts on the ground” and populist rhetoric of ruling leaders. Amnesia seems to have become the state of mind of leadership in the conduct of foreign policy. Undermining sense of history and geography might pave the path for foreign intrigues and conspiracies making Nepal a laboratory for interminable conflict.

KP Oli is the leader of a small faction: Madhav Kumar Nepal
15 hours ago
Road expansion drive along Koteshwor-Jadibuti section  starts
13 hours ago

Two arrested on charge of online fraud
15 hours ago