Elderly people left alone in villages to fend for themselves 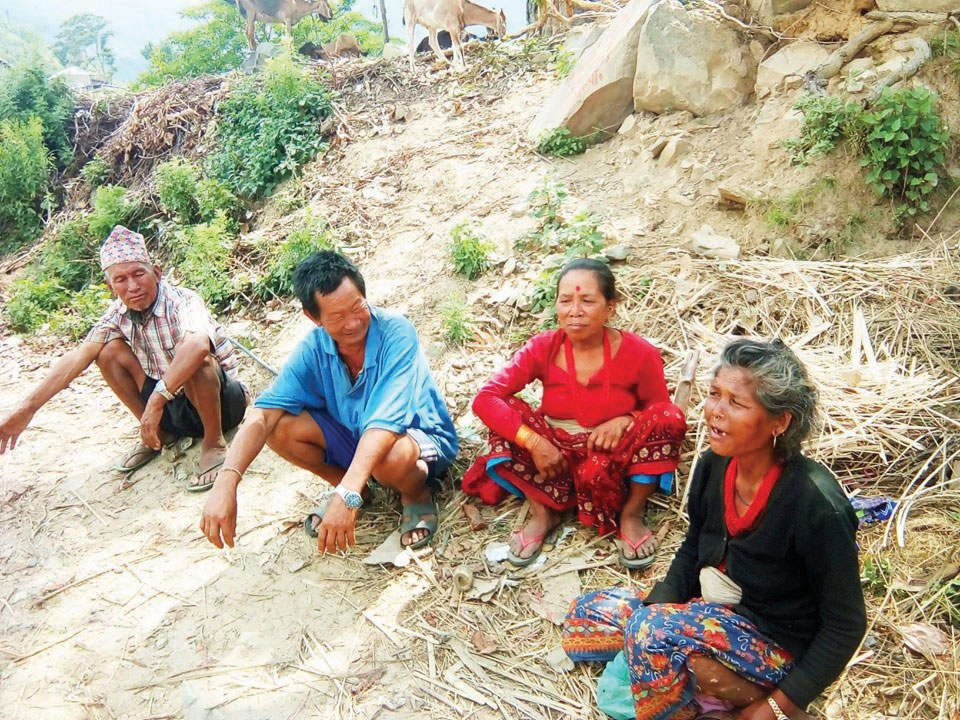 SINDHULI, June 29: When Nara Bahadur Pulami, 72, of Otrekot village in Sindhuli was young, he had two daughters and four sons living with him. Five years ago, his youngest son died. Three other sons are away from home either for foreign employment or for a better life in Kathmandu. His daughters are married off and they rarely visit Pulami and his wife.

The lonely couple’s life is pathetic without children. But none of his children want to return and spend the rest of their lives in the remote village.

“During this old age, we need love, care, support from our children. But such luck was not written in the stars,” laments the elderly man. “All clever people left the village. Only the old people remain here,” he added.

Pulami and his wife have some health issues. When they are attacked by muscle pain, fever or sometimes diarrhea, they feel miserable. What worries the couple is the lack of health facilities nearby and no one to take them to hospital in case of emergency.

“Sometimes, there could be emergency, but here we have nobody to take us to hospital,” Pulami said. “It’s a very scary situation sometimes.”

The problem of loneliness among the elderly people was seen only in the cities and towns until some time back. But this is growingly becoming a reality of rural areas in the country. Pulami’s family is just a representative case as almost every family in his village have their grown up children elsewhere.

“If it was a matter of a day or two, it could be taken easily. But you have to spend the remaining days of your life without children, it gives you deep pain,” said Pulami. “Our children do not show up these days even during festivals.”

Craze for the foreign employment has almost emptied Pulami’s village of youth population. Some young men have also been to India for job. Young women, if they are married, either leave the village with their husbands or migrate to cities for better facilities and education for their children. Thus, the elderly people are the only ones left in the villages.

“I had five children. But now, nobody is with me. They live in Kathmandu. One has gone abroad,” said Keshab Kumar Sunuwar, 73, Pulami’s neighbor. “When we cook delicacies, I vividly remember my children. But there is nothing I can do.”

According to him, it is not a good trend to leave village for cities and other countries. “When your close ones are not together what is the meaning of life?” he questioned.

Sunuwar however understands why the youths are not choosing to remain in the village. Agriculture is not something they would love to do. There is no other job opportunity here. “They do not want to make their hand dirty in the field. They want to remain neat and clean all the time,” he said. “We could not instill in them the value of working in the field,” he added.

Sunuwar argues that a pathetic life in one or two rented room in the city is worse than a poor life in the village. Villages offer bigger space, better food and vegetables and fresh air.

“But I do not understand why cities are in the priority of even those who earn too little to survive. Life would be far better in village instead,” he said. He added that there are lots of facilities in villages as well, and ‘people should return home’.

Chandra Maya Pulami laments that she is not able to see the faces of her grandchildren even once a year. Similarly, Dala Bahadur Jargha, 62, says that the bond between grandchildren and grandparents is fading with time.

“From my five children, I have over a dozen grandchildren. But they do not care about me. They don’t come here that often, they might not even remember my face, “ Chandra Maya says.

“And the children are so calculative. They neither meet their parents frequently, nor provide financial support,” says Jargha.

KATHMANDU, May 7: The Department of Foreign Employment (DoFE) has filed cases against a number of individuals and consultancies which have... Read More...

Renewal of labor permit to be made online starting Friday

KATHMANDU, Dec 31: Labor permit for foreign employment will be made available online starting Friday (January 1, 2021), according to... Read More...

BAITADI, Jan 16: With India being the nearest and one of the most popular destinations for foreign employment for Nepalis,... Read More...

Commercial paragliding flights from Mansangkot in Syangja to begin
54 minutes ago
As mercury dips, MFD urges people to take necessary precautions to avoid cold
1 hour ago