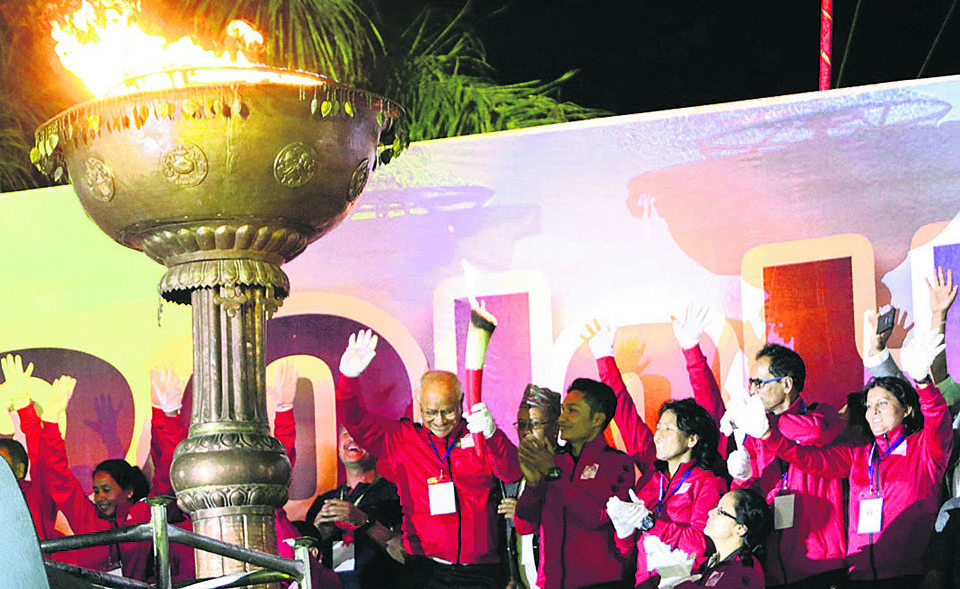 Olympian Surendra Hamal lights the Olympic flame during the inauguration ceremony of the Eighth National Games at the Nepalgunj Stadium in Nepalgunj on Thursday.

BANKE, April 19: The Eighth National Games has officially kicked off at the Nepalgunj Stadium, Banke. President Bidya Devi Bhandari inaugurated the Games amid a huge enthusiasm and fanfare on Thursday.

With the inauguration, National Games, held every two year, also formally entered into the federal set up as the tournament saw participation of 5,211 athletes and players from seven provinces, three departmental teams and NRN. The previous editions of the sporting event featured five development regions and the departmental teams.

The tournament first started in 1981 with an aim to hunt the talented players from different parts of the country including level units. The first three editions of the Games were held every two year. However, the fourth edition of the tournament, held in Nepalgunj, had to wait for more than a decade owing to various reasons. The third edition was held in Birgunj in 1985.

In the beginning, 14 zones used to participate in the national tournament. Five development regions started participating from the fourth edition. The NRN team is participating in the tournament for the first time.

Despite the best efforts to make the inauguration program memorable amid soaring heat, many sports infrastructures have yet to complete. The roads were blacktopped and saplings were planted prior to the inauguration. 16 of the 35 events were started eight days earlier in different venues across the country.

Inaugurating the tournament, President Bhandari said that the government has placed sports as the top priority. “The state is focused in the development of sports as per the available resources,” she said.

Thirteen Olympians carried an Olympic torch around the stadium. Surendra Hamal, a Province 5 lawmaker and an Olympian had lit the torch, which was journeyed to all seven provinces.
Of the total 35, 14 events have already completed. The tournament will conclude on April 24.

DANG, Feb 28: The National Sports Council has allocated Rs 340 million for the construction of a stadium at Beljhundi,... Read More...

59 shelters caught fire in Banke in past 10 months

KOHALPUR, April 27: In the past ten months, as many as 59 houses and sheds caught fire in Banke district, shows... Read More...