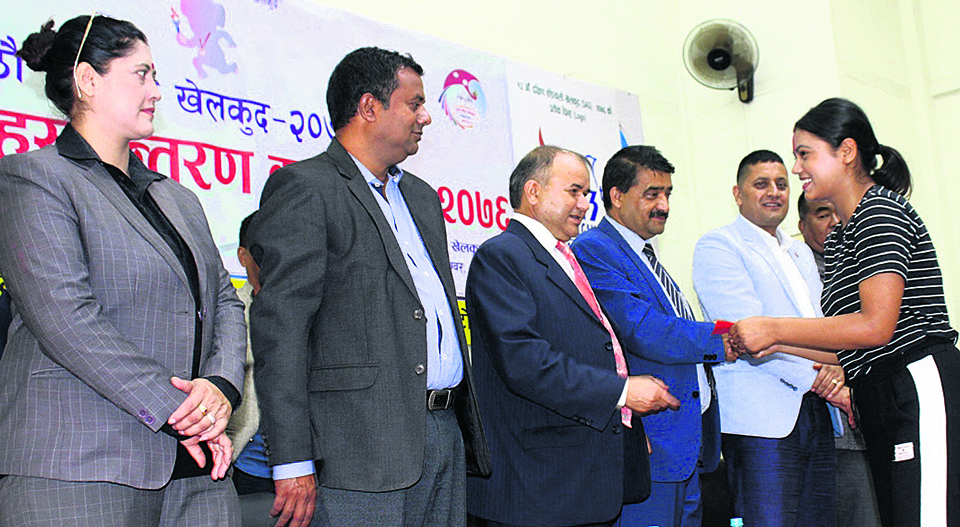 KATHMANDU, Aug 7: The National Sports Council (NSC) felicitated gold medal winners of 35 different games played in the Eighth National Games with cash prizes on July 6. However, the council excluded 13 gold medalists of three other games of the same tournament.

Due to exclusion by the NSC, concerned sports authorities have requested the NSC to provide them with the prize money as well.

Earlier, in the felicitation event organized at the International Sports Complex in Satdobato, a total of 696 players and teams were rewarded with cash prizes for winning gold medals. The NSC gave Rs 15,000 each to the individual gold winners, while the teams to win gold were provided Rs 7,000 each.

Likewise, the NSC also gave Rs 25,000 each to the 16 players who were able to create 26 new national records for every record they created. It spent total Rs 7.7 million for the awards.
In the Eighth National Games, Chandrakala Lamgade of the athletics created two national records, while Krishna Chaudhary, Tulasa Khatri, Sangeeta Meche and Saraswati Bhattarai (relay) created one record each.

But, the 13 winners of bodybuilding, golf, and triathlon have not yet received cash prizes from the council. After the Body Building Association wrote to NSC to provide the prizes to the gold medal winners, the training and coaching department of the council has written to the financial administration department to give the winning players the prize money they were promised.

“The Body Building Association has written us to release the felicitation money to the gold medal winners,” department chief Arjun Bahadur Giri said. “We have already informed the financial administration about the letter. The halted money will be released in a few days.”
Body Building’s Vice-President Dinesh Rajbhandari said that the gold medal winners of the body building game have not yet been rewarded.

“The NSC has said that the other gold medal winners are not rewarded citing problems with the division,” he added, “We have already written to the NSC to provide them the money they were promised. We are hopeful that the money will be given soon.”

In body building event played in Nepalgunj, Saroj Singh won the gold medal in 55 kg weight category, Aawaj Pyakurel in 60 kg, Chandra Laxman Limbu in 65 kg, Anil Lal Shrestha in 70 kg, Ramesh Karki in 75 kg, Chandra Man Shrestha in 80 kg, and Naresh Malakar in over 50 kg.
Likewise, Archery Association’s Ramesh Shiwakoti said that this situation has come up because of the carelessness of the NSC staff.

“When the secretariat chief of the Eighth National Games Indra Karki and Technical Committee’s Rim Ranabhat presented the list of gold medal winners to the former member secretary of the NSC
Keshav Kumar Bista, archery was left out. Bista had directed to mention archery in the list,” Shiwakoti said.

“But, they ignored Bista’s direction. On the day prior to the prize distribution, we warned them that if we did not get the prize, we will stage protest on the venue. Only then the secretary of the Ministry of Youth and Sports Krishna Prasad Devkota directed them to include archery players.”

NEPALGUNJ, Aug 2: National Sports Council (NSC) has failed to release the details of the expenses and progress report of... Read More...