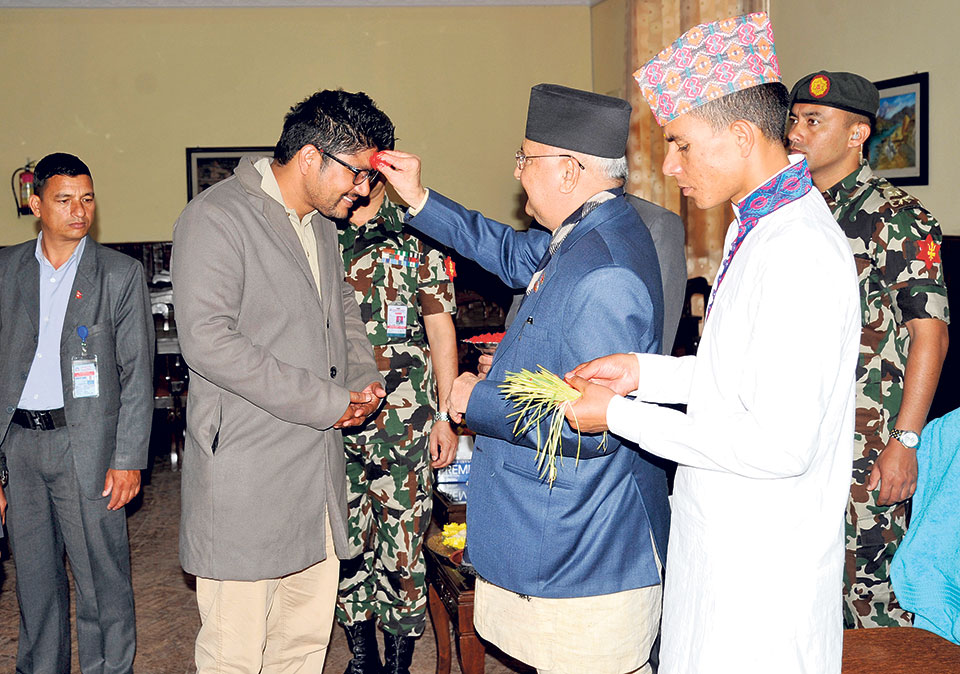 KATHMANDU, Oct 23: When the chairman of the erstwhile CPN-UML, KP Oli, got elected as prime minister in February, many were hoping that he would steer Nepal into an era of peace, prosperity and equality.

Eight months on, the much-hyped ‘Oli wave’ has given way to widespread discontent as the government falls awfully short of keeping up with the tall promises the communist leaders made during the elections.

Oli, who steered the left alliance to a landslide victory with promises of economic prosperity, has not been able to do much different from his immediate predecessors who lacked the electoral support he enjoys.

The government has not been able to deliver on basic expectations of the public, let alone fulfill big development promises made in the run-up to the parliamentary and provincial elections. It has fared miserably on several fronts, especially in upholding the rule of law, combating corruption and maintaining law and order.

Despite the support he enjoys in parliament, Oli appears reluctant to take on the corrupt and the powerful as was evident the way the government stood up to the transport mafia, and big contractors like Kalika Construction and Pappu Construction.

There is even bigger reluctance in concluding the remaining work of truth and reconciliation, the final work of the peace process.

It has been almost three months since Nirmala Panta was raped and killed in Kanchanpur but the government has not been able to nab the culprit and give justice to the victims.

The mega projects like Budhigandaki and the Nijgadh International Airport remain mired in wrangling of various interest groups, while the ongoing projects like Tamakoshi Hydropower Project and Melamchi Drinking Water Project continue to be plagued with the same old woes. For example, the prolonged delays in the completion of Tamakoshi project have led to a twofold increase in the construction cost from Rs 75 million per megawatt to Rs 150 million per megawatt.

Questions have also been raised on the sincerity of the government in upholding human rights and rights to dissent. After futile attempts to restrict protesters from using key venues of the capital including the Maitighar Mandala, the government in August barred Lenin Bista, a former child soldier, from visiting Thailand to attend a conference on child combatants.

Oli government appears apathetic in accommodating Madhesi, Tharu and Janajati who have long been voicing dissatisfaction over the constitution. This has raised fears of fresh conflicts in the country that just came out of a decade of armed conflict and another decade of protracted political transition.

Notwithstanding the historic responsibility of institutionalizing the federalism, Oli government has done precious little to ensure the smooth functioning of the provinces.

Regardless of its failure in domestic fronts, Oli’s performance on international fronts has been satisfactory. He has had considerable success in restoring the relationship with India that was at its historic low after Nepal promulgated constitution in 2015. Many believe that the signing of the transit treaty with China was another important achievement of Oli government, something that could lessen Nepal’s dependence on India on a long run.

The mediocre performance of the government has put Oli on the back foot, with an increasing number of supporters from within the ruling party raising questions on his ability to run the government. Party seniors like Madhav Kumar Nepal and Jhalnath Khanal have openly criticized PM Oli for doing little. Some MPs from his own party has challenged Oli to fulfill the promises made by himself during the election campaign.

The prime minister does not even appear ready to admit failures. Instead, he has reportedly come up with a plan to reshuffle the cabinet which he hopes would turn his vision for “new and prosperous Nepal” into reality. Will it make any difference?  It’s too early to tell. However, one thing is clear: Oli’s failure will push the country into yet another cycle of political uncertainty.