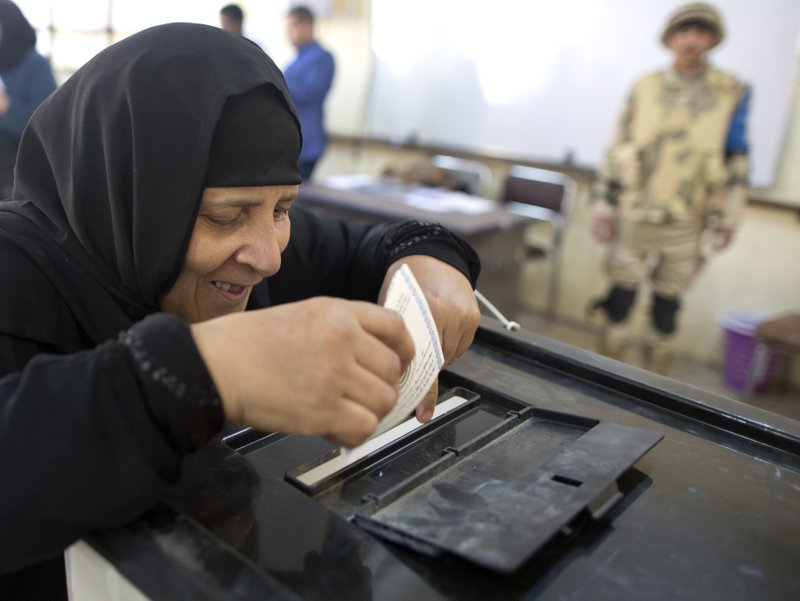 CAIRO, March 26: Polls opened on Monday in Egypt’s presidential election with the outcome — a second, four-year term for President Abdel-Fattah el-Sissi — a foregone conclusion in a vote critics see as a sign the country is sliding back to the authoritarian rule that had prevailed since the 1950s.

A general-turned-president, el-Sissi is challenged by Moussa Mustafa Moussa, a little-known politician who joined the race in the last minute to spare the government the embarrassment of a one-candidate election after several hopefuls were forced out or arrested.

Moussa has made no effort to challenge el-Sissi, who never mentioned his challenger once in public.

Authorities hope enough people — there are nearly 60 million eligible voters — will vote in the three-day balloting to give the election legitimacy. The powerful pro-government media have in past weeks relentlessly portrayed voting as a national duty, required to protect the country against foreign conspiracies.

Some of the presidential hopefuls who had stepped forward might have attracted a sizable protest vote but they were all either arrested or intimidated out of the race, making this the least competitive election since the 2011 uprising ousted longtime autocrat Hosni Mubarak and raised hopes of democratic change.

El-Sissi cast his ballot as soon as the polls opened at 9 a.m. at a girls’ school in the Cairo suburb of Heliopolis. He made no comments, only shook hands with election workers before he left.

There were no long lines of voters waiting in several Cairo districts, but past elections have shown many prefer to wait until the afternoon or evening to vote. Footage aired by local television networks showed women dominating the early voters. They also showed festive scenes outside polling centers, with women and school children singing.

Tens of thousands of policemen and soldiers have been deployed to protect polling centers as well as key state installations during the election.

“I’m not lazy or apathetic, I’m intentionally skipping this one,” said Ahmed, a young man smoking a water pipe at a café near the Khidiwayah high school for boys in central Cairo. He would not give his family name, fearing reprisals.

According to an Interior Ministry statement late Sunday, police killed six militants believed to be involved in a weekend bombing in the coastal city of Alexandria that killed two policemen. The statement said they belonged to a Muslim Brotherhood-linked group and that they were killed in a raid on their hideout north of Cairo.

Mohammed Ibrahim Ali, a retired engineer, patiently waited for the polls to open at Cairo’s bustling Sayda Zeinab middle-class neighborhood that is home to a much revered Islamic shrine.

“Even if there are 1,000 candidates, we will vote for el-Sissi,” he said, struggling to be heard over the patriotic songs blaring from nearby giant speakers. “He is the one who makes life great here.”

Ahmed Abdel-Atti, a 58-year-old doorman in the same neighborhood, voiced skepticism. “Do you see any other candidates?” he asked.

During the official campaign period, instead of addressing any of the scores of rallies held by his supporters or appearing in TV ads, el-Sissi has opted for carefully scripted and televised functions. The former general donned military fatigues on recent occasions, highlighting the war on Islamic extremists and perhaps reminding voters that he led the military overthrow of a divisive Islamist president in the summer of 2013.

Many Egyptians welcomed the overthrow of Mohammed Morsi and the crackdown on his Muslim Brotherhood group. For a time, el-Sissi enjoyed a wave of popular support bordering on hysteria, with downtown shops selling chocolates with his portrait on them.

But that aura faded over the last four years, which could explain a clampdown ahead of the election on the media and critics.

In the Sinai Peninsula, an insurgency that gained strength after Morsi’s overthrow and is now led by the Islamic State group has only grown more ferocious, with regular attacks on security forces and deadly church bombings. An assault on a mosque in November killed more than 300 people — the worst terror attack in Egypt’s modern history.

The government has meanwhile enacted a series of long-overdue economic reforms — including painful subsidy cuts and the floatation of the currency. That improved the investment climate and earned Egypt a $12 billion bailout loan from the International Monetary Fund. But the austerity measures sent prices soaring, exacting a heavy toll on ordinary Egyptians, especially the more than 25 percent living below the poverty line.

If there have been few public signs of discontent, it is likely because of a massive crackdown on dissent.

But on Monday, some risked voicing criticism about the fallout from el-Sissi’s ambitious economic reforms.

“I was a wholehearted supporter, but not anymore,” said Abu Ali, who recently lost his job in a telecommunications company and now works at a Cairo gas station. “Yes, there are big projects but he (el-Sissi) takes from us, the poor, not from them, the rich. We are the people who are living day to day.”

Thousands of Islamists and several leading secular activists have been jailed, and unauthorized protests have been outlawed. The media is dominated by virulently pro-government commentators and hundreds of websites have been blocked. Independent journalists have been arrested or deported.

In late February, authorities expelled The Times of London correspondent Bel Trew, arresting her after she conducted an interview in Cairo’s central Shoubra district, saying she did not have valid accreditation and was filming without a permit.

El-Sissi, meanwhile, has worked to cultivate the image of a folksy populist, going on at length about his devotion to God, reverence for his late mother, and love for Egypt. In a one-hour puff piece TV interview, he said he wished he had one or two trillion dollars of his own money that he could spend on modernizing the country.

In the interview, el-Sissi insisted that the lack of candidates was “completely not my fault.”

“Really, I swear, I wish there were one or two or even 10 of the best people and you would get to choose whoever you want,” he said. “We are just not ready.”

President not to cast vote in local elections

KATHMANDU, May 4: President Bidya Devi Bhandari will not be casting her vote in the local-level elections scheduled for May... Read More...