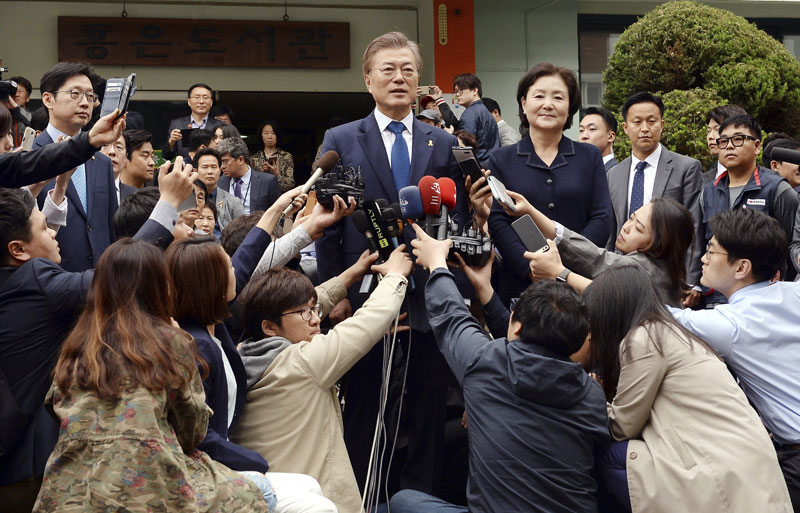 SEOUL, May 9: South Koreans voted Tuesday for a new president, with victory widely predicted for a liberal candidate who has pledged to improve ties with North Korea, re-examine a contentious U.S. missile shield, and push sweeping economic changes.

Conservatives worry that a victory by Moon Jae-in might benefit North Korea and estrange South Korea and its most important ally, the United States.

Moon was the clear favorite as conservative forces struggled to regroup after the huge corruption scandal ended Park Geun-hye's presidency.

"I gave all my body and soul (to the election) to the very end. My party and I invested all our efforts with a sense of desperation, but we also felt a great desire by people to build a country we can be proud of again," Moon, 64, told reporters after casting his ballot.

The final opinion surveys released last week showed Moon, the Democratic Party candidate, had about a 20 percentage-point lead over his two main rivals — a centrist and a conservative.

His victory would end a near-decade of conservative leadership by Park and Lee Myung-bak. Moon was chief of staff for the last liberal President Roh Moo-hyun, who sought closer ties with North Korea by setting up large-scale aid shipments to the North and by working on now-stalled joint economic projects.

Outspoken conservative Hong Joon-pyo, the candidate from Park's Liberty Korea Party, described the election as a war between ideologies and accused Moon of being aligned with North Korea.

After voting, Hong said the election was a "war of regime choices between people, whether they decide to accept a North Korea-sympathizing leftist government or a government that can protect the liberty of the Republic of Korea," South Korea's formal name.

Hong has pitched himself as a "strongman" who can hold his own against other "nationalist" leaders in Washington, Tokyo and Beijing. He also calls for the United States to bring back tactical nuclear weapons to South Korea after withdrawing them in the 1990s.

The polls have shown Hong and centrist Ahn Cheol-soo running even.

Voting stations are set to close at 8 p.m. and South Korean TV stations plan to release the results of their joint exit polls soon after the vote ends and are expected to predict a winner before midnight.

The winner will be sworn in after the National Election Commission ends the vote count and confirms the result Wednesday. Because the vote is a special election, the new president will forgo the usual two-month transition and will serve one full, five-year term rather than only completing Park's original term, which was to have ended in February 2018.

Some voters were eager to end the long conservative rule, which they think failed the economy and undermined democracy before the corruption scandal toppled Park.

"Moon wasn't my favorite candidate in terms of policies, but I voted for him because he represented the best chance to switch government power and that's the most important thing over anything else," said Lee Ah-ram, a 39-year-old Seoul resident. "We need a leader who could restore the people's trust in government that had been damaged by Park's scandal."

Others were more concerned about the growing threats posed by North Korea's nuclear weapons and missiles and fears over Seoul losing its voice in international efforts to deal with its belligerent rival.

"We need a leader who could protect national interests and hold his ground against the surrounding global powers of the United States, China and Japan," said Kim Hyeong-seok, a 67-year-old who said he voted for Hong. "This is not the time to keep our eyes just on domestic issues — we need to think about the nation's long-term future and peace."

Park, South Korea's first female president, is jailed at a detention facility near Seoul and awaits a criminal trial set to start later this month. She has been indicted on bribery, extortion and other corruption charges, which could send her to jail for life if she is convicted.

The allegations incensed many in South Korea, with millions taking to the streets in protest. Park sympathizers later staged their own rallies. Dozens of high-profile figures, including Park's longtime confidante, Choi Soon-sil, and Samsung's de facto leader, Lee Jae-yong, have been indicted along with Park.

Moon, who lost the 2012 election to Park by a million votes, frequently appeared at anti-Park rallies and the corruption scandal boosted his push to re-establish liberal rule. He called for reforms to clean up social inequalities, excessive presidential power and corrupt ties between politicians and business leaders. Many of those legacies dated to the dictatorship of Park's father, Park Chung-hee, whose 18-year rule was marked by both rapid economic rise and severe civil rights abuse.

As a former pro-democracy student activist, Moon was jailed for months in the 1970s while protesting against the senior Park. He later worked as a human rights lawyer and chief of staff for Roh, who governed in 2003-2008.

Moon has called Park Geun-hye's hard-line North Korea policy a failure. If elected he says he'll employ both pressure and dialogue to persuade the North to abandon its nuclear ambitions. He also advocates building up a more assertive South Korea and is critical of Park's decision to allow Washington to install the Terminal High-Altitude Area Defense (THAAD) advanced anti-missile system in the South. The system has irked Beijing, Seoul's largest trading partner.

"I'll take charge so you won't have to worry about security, national defense and peace," Moon said Monday in a message addressed to senior citizens, many of them conservative voters who oppose Moon because of what they see as a soft North Korea policy.

Many analysts say Moon, if elected, likely won't pursue drastic rapprochement policies because North Korea's nuclear program has progressed signficantly since he was in the Roh government a decade ago. Foreign experts say it may take only several years for North Korea to develop nuclear-armed missiles that can reach the U.S. mainland. The country may already have shorter-range nuclear missiles that can strike South Korea and Japan.