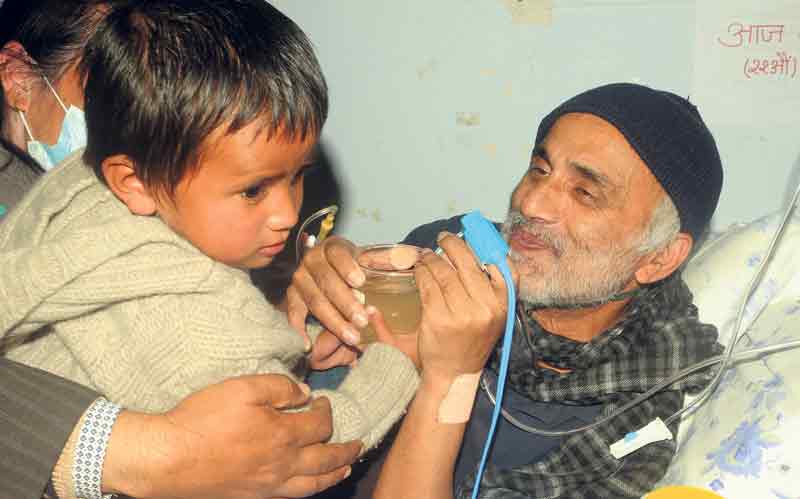 Dr Govinda KC ends his 22-day fast-unto-death after signing a 12-point agreement with the government at the Tribhuvan University. Photo: Keshab Thoker/Republica

KATHMANDU, Dec 5: Senior orthopedic surgeon Dr Govinda KC, who has been on a fast-unto-death for the last 22 days, ended his hunger strike on Sunday after the government addressed some of his demands and committed itself to fulfilling the remaining demands in the coming days.

Dr. KC ended the fast with a juice drink offered by two and half-year-old Marsang Tamang, whose mother was killed in the devastating earthquake of 2015.

With his 10th and latest fast-unto-death concluding on Sunday, KC has spent altogether 119 days on hunger strike during the last four years, to fight against corruption in the medical sector.

This time, he had to wait 22 days before the authorities bowed to his demands, making this his longest hunger strike.

Dr KC began his hunger strikes against the government with the aim of putting an end to the growing corruption in the medical sector and keeping it free from political interference.

He undertook his first fast-unto-death in July 2012. He was forced to stage his 10th hunger strike as the government breached previous agreements under which successive governments had committed themselves to appointing the dean of the Institute of Medicine (loM) on the basis of seniority.

Going back on a previous commitment, Tribhuvan University had appointed Dr KP Singh as the dean of IoM, the crucial body for providing affiliations to medical colleges and regulating them.

Immediately after Dr Singh's appointment as dean, Dr KC began his hunger strike, demanding that both Dr Singh and TU Vice Chancellor Tirtha Raj Khaniya be removed from their posts. He also raised eight other demands.

Dr Singh was forced to resign on Friday, the 20th day of Dr KC's fast. But his demand for the sacking of  Khaniya remains unimplemented for now.

Dr KC is still not convinced that the government will implement the agreement and has warned of a fresh fast-unto-death if words are not translated into action. “Media, civil society and stakeholders should continue to pressure the government to implement the agreement. I will be forced to again take a tough step like this one if our concerns are not addressed properly,” Dr. KC told reporters gathered at Tribhuvan University Teaching Hospital (TUTH).

A visibly weak Dr KC was taken to the ICU at TUTH immediately after he broke his fast.
As per his demand for the appointment of the seniormost professor to the position of IOM dean, Professor Dr Jagadish Prasad Agrawal has been duly appointed as dean.

Before ending the hunger-strike, Dr. KC signed a 12-point agreement with a team of government representatives.

Both sides have agreed to bring into effect a fee ceiling of Rs 3.5 million for MBBS studies in Kathmandu Valley and 4.2 million outside the Valley for this year. Similarly, the fees for BDS has been fixed at Rs 1.9 million. According to the agreement, the fees will be paid through the banking system.

The government has also reiterated its commitment to establishing a government medical college in each of the seven provinces. Similarly, TU has been instructed to work in line with empowering IoM as an autonomous body and not  grant affiliation to any new medical college until the National Medical Education Bill gets endorsed. The bill has been pending in Parliament for months.

In Sunday's agreement, the government has also agreed to provide 50 percent of seats in public medical colleges under scholarship  for eligible students and progressively bring the scholarship quota up to 100 percent.

It has also decided to ask the Commission for Investigation of Abuse of Authority to implement the report submitted to it by the Jayaram Giri Commission.

Following Dr. KC's hunger strikes, Nepal's medical sector has witnessed some significant changes although many of his demands still remain unaddressed. The government was forced to take over ownership of the Manmohan Medical College and stop granting affiliations to private medical colleges without proper study.

Apart from this, Parliament has begun the process of impeaching suspended  CIAA chief Lokman Singh Karki on the charge of abusing his authority to benefit medical colleges operated by family members. Impeaching Karki is one of the demands raised by KC.

KATHMANDU, Mar4: Dr. Govinda KC, who has been fighting against irregularities in the medical sector, has warned of starting yet another... Read More...