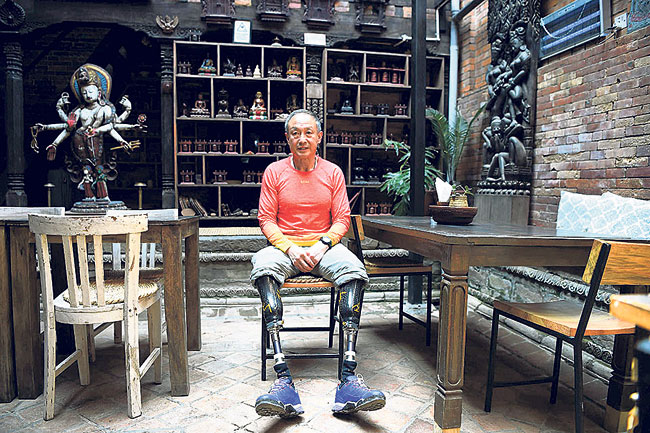 KATHMANDU, May 15: Double amputee Chinese climber Xia Boyu has finally reached the summit of Mount Everest (8848m), on his fifth attempt to stand on the summit of the highest mountain in the world.

The 70-year-old Boyu has also become the first mountaineer to scale the mountain from the Nepali side in this spring season.

Boyu had received the permit to climb Mt Everest this spring season after the Nepal government lifted a ban on double amputees from climbing Mt Everest.

Earlier on December 30 last year, the cabinet had taken a decision to ban double amputees from climbing Everest. The decision, however, was stayed by the Supreme Court. The apex court, on March, directed the government to allow double amputees to climb the mountain.

Before Boyu, Mark Inglis, a double amputee below knees from New Zealand, had scaled Mt Everest in 2006.

Meanwhile, more than 50 members reached the summit of Mt Everest on Monday. Nepali woman climber, Numa Jangmu Sherpa, has become the first woman to climb Mt Everest and Mt Lhotse in this spring. She hails from Dolakha district.

According to Shrestha, Sherpa had climbed Mt Lhotse on April 29. “She reached the summit of Mt Everest Monday morning leading her clients,” he added.

Department of Tourism (DoT) has issued climbing permits to 105 teams having 839 members top climb 28 different mountains across the country. A total of 38 teams having 346 members have received permit to climb Mt Everest. Four of them are all-Nepali teams, according to the department.