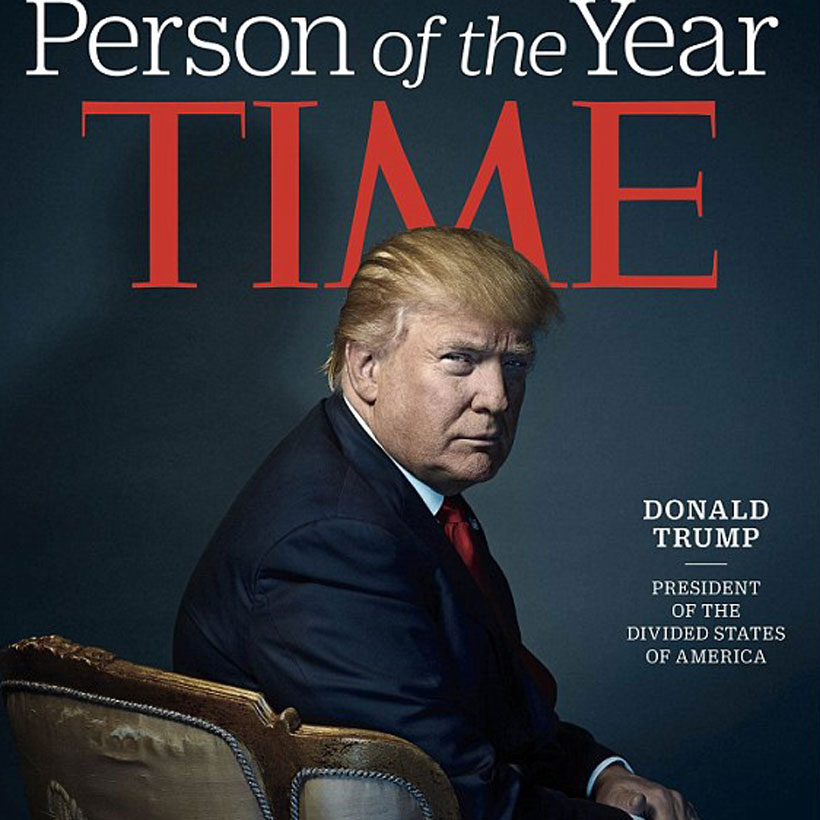 Though some may believe Donald Trump is the devil, social media is questioning whether Time was hinting at the comparison when the magazine created its 2016 “Person of the Year” cover.

Time unsurprisingly selected Trump has the year’s most impactful person, and the choice quickly shifted to how the cover was created. The Time logo was placed under Trump with the “M” landing just beneath his head so it appears that he has “devil horn,” according to several social media users.

Others drew similarities between Trump’s image and a cover shot of Adolf Hitler.

The various theories made the rounds of Twitter on Wednesday.

Some said the placement of the letter M above Trump’s head made it seem like the President-elect had two red horns.

‘Shocked that TIME has appropriated Satan himself, but at least they gave him the devil horns he deserves,’ one Twitter user wrote.

‘The low-key devil horns on the Trumpy Time POY cover are 100,’ another said.

Another Twitter user said: ‘The time magazine cover places the M so it looks like DT has horns. Shameful.’

Some pointed out that Trump posing in an armchair was strikingly similar to a cover that featured Hitler from 1941.

‘Interesting how @Time put Hitler and Trump in similar chairs and positions, back-to-back. Intentional I’m sure,’ one Twitter user wrote.

Another said: ‘Hitler, Stalin, Putin and now Trump. All have been a person of the year. @realDonaldTrump is in bad company. Ok, I get it Time, makes sense.’

Hitler was named Time’s 1938 Man of the Year but the cover from that issue showed a black and white illustration drawn by Rudolph Von Ripper that showed Hitler from the back.

The President-elect was declared the latest winner of the annual honour on Wednesday morning, beating out finalists including Hillary Clinton, Beyonce and Vladimir Putin.

Time editor-in-chief Nancy Gibbs said it was the easiest decision the magazine has ever made for the honour.

They cited the upheaval in American politics brought about by his election campaign and victory.

‘It’s hard to measure the scale of his disruption,’ Time said in its announcement.

Time makes its annual choice based on the impact a person has on world events – good or bad. German Chancellor Angela Merkel was chosen last year. Previous winners ranged from Gandhi to Hitler.

This was the second year in a row that Trump had been a finalist of the accolade.

‘To be on the cover of Time as Person of the Year is a tremendous honour,’ Trump said.

He rejected Time’s characterisation of the country as fractured after the magazine’s called him the ‘president of the divided states of America’ on the cover.

‘Well, I think putting divided is snarky. But again it’s divided, I’m not president yet. I didn’t do anything to divide,’ he told Today on Wednesday.

‘There’s a lot of division. We’re going to put it back together.’

The magazine has been incredibly critical of both Trump and his politics over the past year, with the August 22 issue of Time showing Trump’s melting face with the word ‘Meltdown.’

Two months later, on October 24, the image was even more severe with the subhead reading ‘Total Meltdown.’

‘I believe we will be successful in defeating ISIS or bringing them down to a level where it’s almost the same thing. And I hope I’m judged from the time of the election, as opposed to from January 20th because the stock market has had a tremendous bounce.

‘And people are seeing very good things for business in this country. So I think we’re going to have a lot of victories.’

When then asked what he thought of this country, Trump said: ‘Most incredible place ever. And we were losing that. And I don’t want to lose that. And the people that voted for me, we call them the forgotten men and women.

The President-elect also made it clear during the interview that he was not backing off his plan to build a wall between American and Mexico.

He said that he did still want to welcome in young Dreamers however despite the wall.

‘We’re going to work something out that’s going to make people happy and proud. But that’s a very tough situation.’