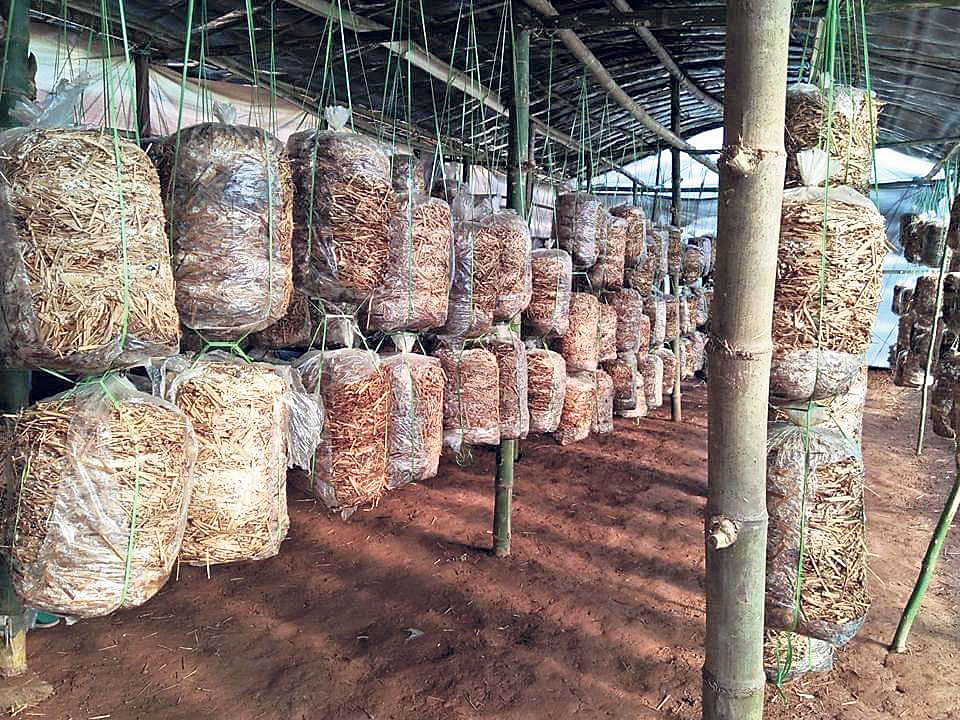 DHADING, Feb 16: Women from Damgade Batase-12, Nilkantha Municipality of Dhading have started group mushroom farming through cooperatives to generate income. The group's first harvest of mushroom has already found buyers in the district.

According to Shusila Kumal of Batase-12 of Nilkantha Municipality, women farmers are attracted to organic farming as the use of pesticides has negative health effects on people.“We were limited to housework in the past but now we are engaged in mushroom farming,” she said, “The demand has increased as the organic mushrooms are sold for Rs 200 per kilogram in the local market.”

Women associated to Sangkosh Women Agriculture Cooperative which was established with an aim to improve financial and social status of women farmers have started commercial mushroom farming for the first time. The women used to do farming in small scale for household consumption but now they have started producing for commercial purposes as well. Women of Lamgade have started making it a good source of income as the demand for their produce is growing.

The Agriculture Knowledge Center, Dhading had trained the women for commercial production of mushroom. Kumal said that women used to borrow money for daily necessity but now they have their own source of income and have become self-reliant. “We have gotten the chance to get involved in commercial mushroom farming through the cooperative,” she told Republica. “This helps us with daily household expenses and we don't need to depend on anyone.”

Sanumaya Raut, a farmer said that if market can be managed according to the production, women can be self-reliant. “Though there was no market in the beginning, customers visited our houses for the product,” she shared, “If the local level managed the market as per our production, the income would increase.”

Mushrooms are sold for as much as Rs 270 per kilogram from local farms. Just like Sangkosh, women with their associations to more than 10 women cooperatives, are financially benefiting from group mushroom farming. The income will be used for household expenses and also for empowerment of rural women and development.

Chairperson of Sangkosh Women Agriculture Cooperative, Pampha Nepali said that the mushroom farming has been started to make women self-reliant through agriculture. “Women are interested in mushroom farming as it can be started with less investment and work but gives out good income,” she said.

Is Nepal ready for organic farming?

Although the modern production system has been found to solve food problem, it has created many other problems. The haphazard... Read More...

The number of foreign tourist arrivals in Nepal encouraging during off season: NTB
52 minutes ago